Brothers Peter and Udo Gross have been farming sturgeon (Acipenseridae) at their Fischtucht Rhönforelle farm in central Germany for 29 years, working their way through an initial cost-only decade before settling into a pattern of progressive production which continues today. 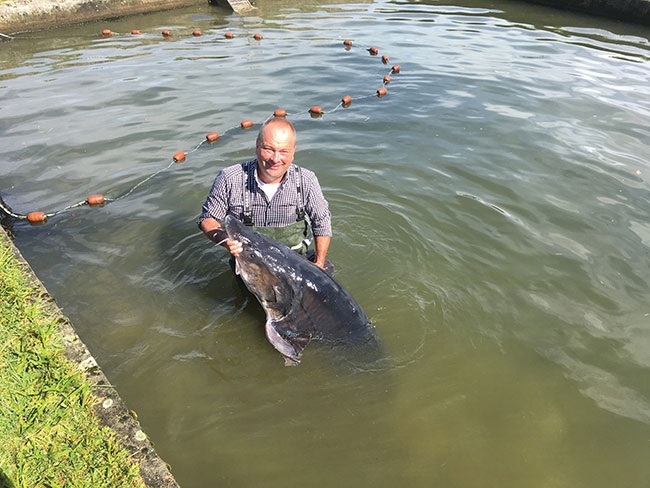 Currently working with eight different sturgeon species, five of which are reproducing nicely while the other three remain ‘in development’ in breeding terms, the brothers’ sturgeon adventure has never been boring or, for that matter, particularly easy. It has, however, always been exciting and rewarding, at least after the first 10 years of investment was completed.

Roots
Fischtucht Rhönforelle, which is a flow-through freshwater pond located near Gersfeld, in the heart of the country’s Rhön region, has been in the family since 1882 when it was established by the present owners’ great-grandfather, Eligeus Gross.

He initially used the farm to produce brown trout, a fish which at the time were considered a delicacy in Germany, creating a demand for his product which he transported to customers by horse and cart in water-filled barrels.

Although the business has kept pace with changing production and market demands over the years, the sale of trout for consumption remained the core of the business throughout its first 100 years.

That was before Peter, aged 20 at the time, returned in 1990 from a period of fish farming experience in the U.S.A., which included a brief work placement with a major trout producer in Idaho.

What really grabbed his attention, however, wasn’t the potential of farming trout for a living but the more exciting appeal of raising sturgeon, which he also saw during his time in Idaho.

The ultimate aim was to produce caviar, a goal which was finally achieved last year, 28 years after Peter’s return from the U.S. His sturgeon story is much bigger, however, than just the production of 10 kilograms of home-produced Rhönforelle caviar in 2018.

Business building
For the last 19 years, in fact, Peter and Udo have slowly but steadily developed a sturgeon breeding operation, based on five different breed species, from which they produce one million eggs a year for sale to customers around the world. They also supply sturgeon fingerlings to on-growers throughout Germany.

Before starting to earn money from sturgeon, however, the brothers had to endure 10 years of investment and learning, alongside a large amount of breeding trial and error.

“That first decade was really all about costs and not much about income,” says Peter, whose enthusiasm for the idea of breeding sturgeon in the harsh winter conditions of the Rhön region somehow got him through the difficulties of the start-up period.

“The main reaction I got when I arrived back from the USA talking about sturgeon was that I was crazy to even think about farming the species in Germany,” he says. “It wasn’t much better a few months later when I met representatives of a major Soviet Union company, Sofrybflot, who were promoting their high-quality caviar at Germany’s massive ANUGA food trade fair, held in Cologne.

“When I told them I wanted to buy fertilized sturgeon eggs from them, not caviar, they said it wasn’t really their thing but if I wanted to travel to Russia to see their farming operation, I was welcome. Two months later, along with a good friend, I drove to their farm in Konakowo, which is about 200 kilometres from Moscow to take a look.”

Actually, it was a bit more than a look, as Peter and his companion, arrived with a pick-up, fully equipped with empty fish tank and a full oxygen cylinder. Having already negotiated the legal requirements to enable him to return to Germany with live fish, his Russian hosts eventually responded by providing him with a starting consignment of 1,000 fingerlings. Pre-sale discussions took about two days but when he left Russia, it was with a full fish tank and an on-demand oxygen cylinder.

“This was quite a breakthrough,” Peter says. “We became one of the fish farms in West Germany (as it was until 1990) to be allowed to bring live sturgeon into the country. Egg imports into the EU from the former Soviet Union had been possible before then, arriving in France in the 1980s, for example, but not live fish.”

Slowly but surely
Having established that live sturgeon and fertilized eggs could be moved safely and legally from Russia to their Fischtucht Rhönforelle location, Peter and Udo turned their focus on how to make their breeding operation successful.

“One of the first things we had to do was to introduce heat into our former trout hatchery to create the warmer water which sturgeon require to achieve acceptable growth rates,” says Peter.

“During those first years we depended wholly on obtaining new supplies from Russia, although we didn’t travel to collect live fish any more, being happy to progress with imported fertilized eggs.”

With sturgeon females taking anything between nine and 14 years to reach sexual maturity, and then only spawning once every two to three years, the start-up period for the new unit was inevitably slow.  As a result, it was the year 2000 before Fischtucht Rhönforelle was ready to start producing its own eggs.

“Although it was a long 10 years of development to go through, the good news is that our sturgeon operation, when it began, was successful,” says Peter. “Unfortunately, having convinced my father that farming the species was a good idea, we initially found ourselves in 1991 and 1992 with 20,000 fingerlings but with nobody wanting to buy them.

“There was no idea among other fish farmers at the time that rearing sturgeon might be a good idea. There seemed to be plenty of caviar available from traditional wild sources to keep the market happy.

“Later, around 1996 – 1998, sturgeon started to appear on the endangered species list, prompting many people to start thinking about the potential of producing caviar from farmed sturgeon. So, while our first years were very hard, the work we’d done from 1990 to 1998 paid off in that we were ready and able to provide high quality fertilized eggs to many customers when demand began to build.”

After a strong growth and income period for the farm, driven largely by the knock-on effect on the world market of China’s sturgeon investments, Peter and Udo’s business today is based on a solid home-grown broodstock base, with some of their earliest fish now nearing 30 years of age and weighing up to 150 kg.

While the fertilized egg market isn’t as dramatic as it was 20 years ago, the brothers are still selling successfully into several European countries, exporting to South and North America, plus sending smaller consignments to Vietnam, Kazakhstan and one or two other countries.

“While the original aim, back in 1990, was to produce caviar, we’re very happy with where we are with our sturgeon breeding enterprise today,” says Peter. “Our breeding program developed naturally in tune with the cold winter climate in which we have to operate, leading us to concentrate on fertilized egg production and the raising of fingerlings.

“Having started from scratch with our own young fish and relatively small stock numbers, it didn’t make sense for us to kill any of our fish in order to harvest caviar, as would have been necessary under German regulations. Producers here aren’t allowed to use ovulated eggs for caviar. It’s allowed in other countries but not here, which is why we’re still only producing a very small amount of caviar from our stock.

“Alongside this, however, we have a strong breeding base for sturgeon in Germany, 29 years after being told it crazy to attempt such a thing.”