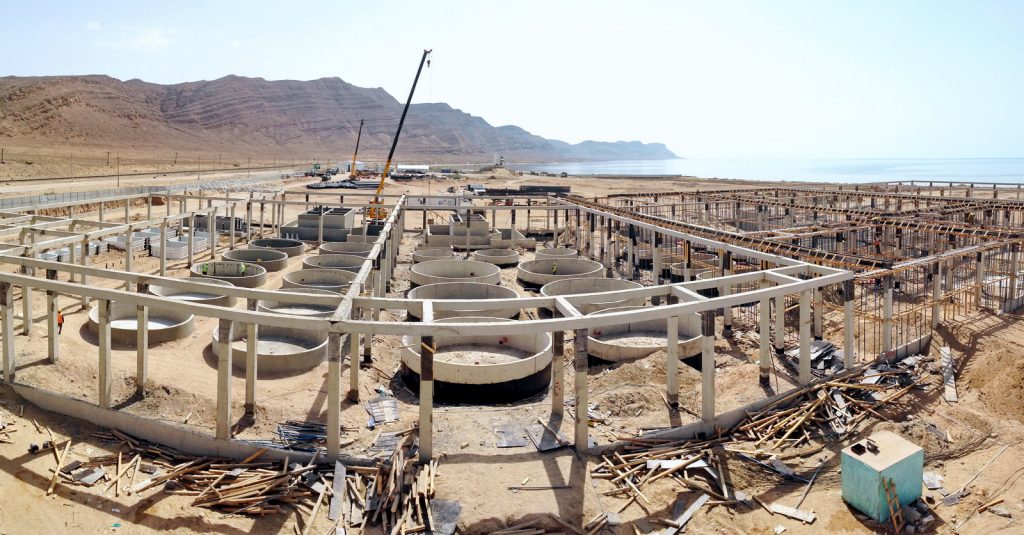 The once-important natural stocks of sturgeons in the Caspian Sea have almost vanished due to over-fishing, pollution and environmental degradation, but a new, closed-circuit, land-based sturgeon farm is under construction near Turkmenbashi on the shore of the sea. Completion is scheduled for early 2015. The complex is designed to produce up to 60 tonnes of sturgeon meat annually, 3t of caviar, and additionally process up to 200t of fish caught at sea.

Management of the massive multimillion dollar project is under the direction of the Union of Industrialists and Entrepreneurs of Turkmenistan, which is expanding its participation in the real economy of the country. The project is supported by preferential loans from the government that were used to create the open joint-stock company known as “Hazar Balyk.”

Occupying an area of more than six hectares, the construction of 13 separate buildings, including the covered fish farm, a processing plant, a two-story administration building, and technical facilities like the desalination system, heat centre, power stations, and wastewater treatment system are progressing simultaneously.

In order to ensure trouble-free operation of the recirculation systems that have been designed by Billund Aquakulturservice A/S (Denmark), many challenges, like water – and energy supply and cooling and heating requirements, had to be addressed in a country that is mostly desert.

Owing to an air temperature range from -20°C in winter to up to 55°C in summer temperature control was one of the most important issues, resolved by focusing on insulation and using cutting-edge cooling machines and heat-exchangers. Owing to the low energy costs in a country rich in gas and oil and not relying on the unstable local electrical supply, the energy for the farm will be provided by generators.

The site is close to the sea, which despite being inland, has a salinity of about 12%, thus a complete reverse osmosis desalination system designed to deliver 1000 m³ fresh water per day is under construction to accommodate the sturgeon’s and processing farm’s requirements. Furthermore the on-growing and grow-out systems will be supplied with an additional 1000 m³ of saltwater per day coming from a drilled well.

The fish farm will depend on seven separate recirculation systems including live feed- incubation- and fry-nursery systems. According to the natural requirements of the sturgeon, hatching will take place in freshwater, and the fingerlings will be grown in saltwater systems until they are mature and finally moved back to fresh water systems before the caviar will be harvested.

Initially it will be stocked mainly with Russian Sturgeon (Acipenser gueldenstaedtii) as well as Beluga (A. sturio). The Russian sturgeons are expected to grow from a fry weight of 50g to 5kg final production size within one year and caviar will be harvested throughout the year once the normal mode of operation is fully established.

Turkmen specialists have successfully completed a training and education program at Aquatir. Additionally, a one-year, on-site program focused on technical and biological training and education will be implemented by Billund Aquakulturservice A/S in conjunction with AquaFuture e.K., to guarantee the successful operation of the new fish farm, and prepare for the next step – a broodstock development program and a large sturgeon fingerling farm to restock the Caspian Sea. The source of the broodstock has not been identified but they will not come from the Caspian Sea.