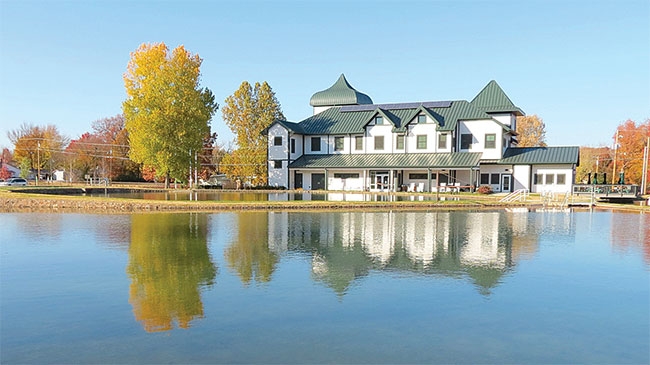 Bruce Hallman, environmental education specialist with the hatchery, told The Joplin Globe that conservation officials and scientists have recommended that circular tanks might make for a better breeding environment for the species. The hatchery previously used large rectangular tanks.

“Basically, it’s just going to create an endless path for them to be able to swim,” Hallman said. “There will be a little current in there that will kind of mimic the river, and the thought is just that that’s going to keep them a little happier.”

According to the U.S. Fish and Wildlife Services, which manages the Neosho National Fish Hatchery, the pallid sturgeon is one of the least understood fish in the Missouri and Mississippi Rivers. Its population dramatically declined during the mid to late 1960s, when all of its habitat experienced modification through river channelization, construction impoundments and related changes in water flow.

“These changes blocked the pallid sturgeon’s movements, destroyed or altered its spawning areas, reduced its food sources or its ability to obtain food, and altered water temperatures and other environmental conditions necessary for the fish’s survival,” the government agency stated on its website.

Efforts to restore the sturgeon’s natural habitat and improve breeding and restocking have so far produced no evidence of sturgeon reproduction in the wild, the news report stated.

“If they have found the rare cases where they’ve seen behavior that looks appropriate, later they haven’t found the babies that would support that,” Hallman told the community paper. “So there are just a lot of question marks with the whole program. It’s a huge mystery in a lot of aspects.”

Young sturgeon raised at the hatchery are released into the lower Missouri river when they are at least 9 inches in length, the news report said.

Adult sturgeon brought to Neosho will now live in one of two larger tanks that will be 20 feet in diameter when assembled, Hallman told The Joplin Globe. They also received eight smaller tanks, about 3-feet deep and 6 feet in diameter, for the newly hatched fish.

For the future, the hatchery plans to potentially double the number of small tanks to 16, Hallman said. For now, he added, the eight tanks will be sufficient to take care of the species for the whole year.