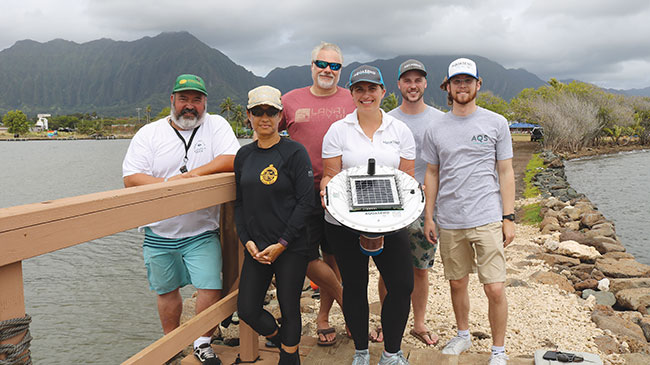 Aquasend has deployed three Aquasend beacons in the Hawaiian fishpond, Waikalua Loko l’a, through our partnership in the Xylem Innovation Labs’ Incubator Program.

The Pacific American Foundation, tasked with this project, is utilizing the beacon’s data to assist with the restocking of native mullet and milkfish.

Prior to Hawaii’s statehood, there were nearly 500 fishponds across the Hawaiian Islands. As time has passed the number of fishponds has decreased to less than 100. Efforts to preserve the remaining Hawaiian fishponds are increasing with the help of The Pacific American Foundation.

The Aquasend beacons will monitor the amount of biomass the pond is equipped to support through dissolved oxygen (DO) levels and temperature data collected.

Waikalua Loko l’a operates with stationary gates called makahas, which are located in the canal and built into the seaward wall of the pond. Maintaining the original design created by Hawaiian ancestors, the gates are designed with small vertical standing wood poles held together with rope to let smaller fish into the pond. The fish would be fed, grow and become trapped in the fishpond due to their larger size.

The Aquasend Beacon will continuously monitor the pond’s dissolved oxygen (DO) and temperature levels throughout the day to assess the pond’s fish density.

“We are thrilled to be part of the Waikalua Loko l’a pond regrowth and have the opportunity to expand Aquasend water technology operations through our partnership in Xylem’s Incubator Program. It’s our goal to support this industry with data and solutions,” said Kristin Elliott, CEO of Aquasend.

Three Aquasend beacons were deployed and installed across the pond’s brackish water to gather data on both moving and stagnant water points. The buoys are collecting real-time dissolved oxygen and temperature measurements continuously each day over three months.