The Great American Aquaculture (GAA) company in Waterbury, Connecticut is finishing off initial development of what it claims will be one of the largest recirculating-saltwater aquaculture facilities in the northeast United States. 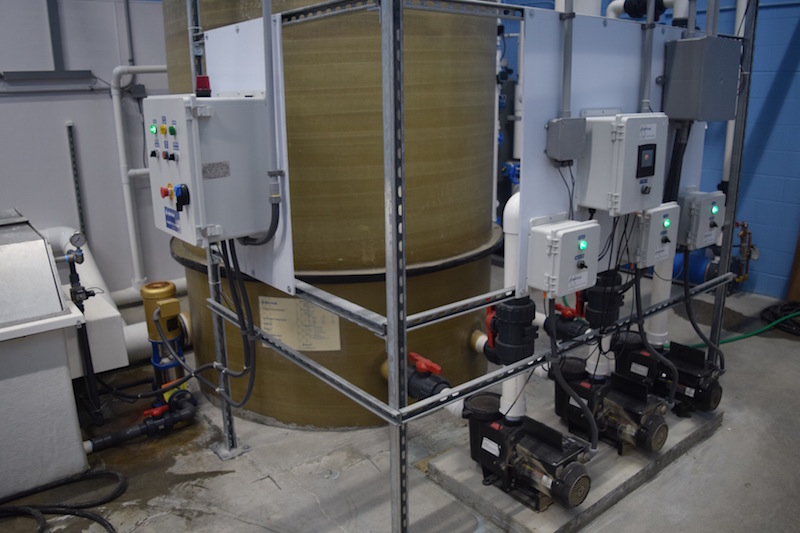 When complete, the unit will produce some 300- 350,000 European sea bass (known as branzino) a year. The facility is being developed using technology designed and provided by Pentair AES of Florida.

Currently the sea bass are imported to the US Northeast from the Mediterranean but in future Pedersen confirmed that he intends to obtain fingerlings from a hatchery in Maryland. Pedersen told Hatchery International that the fish are now being grown from fingerlings in a quarantined and isolated on-land complex.

GAA has implemented “a very rigorous” biosecurity system at Waterbury that will see the tiny fingerlings go into a series of four quarantine and nursery fish-tanks for the first four months at their new home.

A mixing tank provides different concentrations of sea salts to make briny water tailored to the different growing stages of the fish.

When asked about the waste material from the fish and from the feed, Pedersen explained that there hasn’t been much yet, but what there is, is being collected, then flushed to remove some of its salinity so it can be used by local farmers for composting.

Once the new aquaponics unit is in place and operating much of that waste material will help with growing plants in that part of the system.