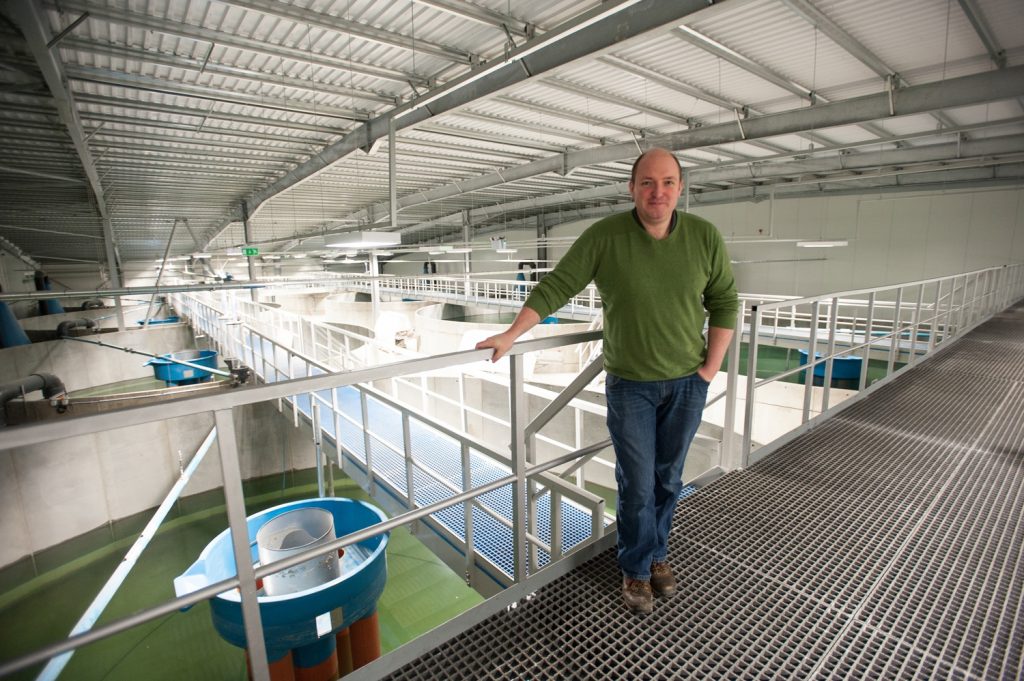 Loch Ailort is well known as the birthplace of fish farming in Scotland with Marine Harvest having a long history in the area with activities stretching back to 1965. It is only fitting then that Inverailort, situated at the head of the loch, has been picked as the site for Marine Harvest Scotland’s new state-of-the-art recirculation facility.

However, according to John Richmond the project manager, it is not only history that has influenced the choice. Situated within the centre of Marine Harvest’s operations it is ideally placed for supplying parr to the freshwater lochs and smolt to the sea sites and has the critical advantage of being in the same place as an older and much smaller RAS hatchery which the new one replaces. The staff from this facility have all transferred over, supplemented by extra new staff, taking the full time compliment up to ten. The experience gained in the old RAS unit with the same raw water supply gives the new project a significant advantage.

Construction started on the new site in the Spring of 2012 and the official opening was scheduled to take place by the Scottish First Minister, Alex Salmond, in the first week of June. When Hatchery International visited, the first alevins and fry were already on site with eggs being brought in during May and earlier eggs which had been received in March being transferred over as first-feeders to the fry unit. The hatchery will operate a strict “eggs only” policy to ensure bio-security.

The building itself covers an area equivalent to two football pitches with a total of 13,500m², the dimensions being 150m x 90m. In a fortunate turn of events the existing ground was ideal for grading aggregate and only cement was required to be brought on site in order to mix concrete for the foundations. In the end, a total of 8000 m³ of concrete was used in the construction.

The hatchery is based around four main independent units; one fry unit, one parr unit and two smolt units. John Richmond spent a lot of time visiting existing RAS units in order to fully understand the strengths and weaknesses of each and his final design is based on the low head-low energy Aquatec Solutions system with some innovative modifications.

There are four 700m³ make-up water tanks; one is a buffer tank, two where the water is treated with ozone at a redox of 750mv for 30 minutes and the final tank is for treated water. All incoming water passes through a bank of sand filters prior to ozonation.

With the “zero water change” technology in the Aquatec Solutions system the total make-up water is about 2% of the system volume per day which equates to about 300m³.

Incubation of eggs and alevins is performed in four independent units with their own recirculation and temperature control systems. Each system employs a total of 7 CompHatch systems. Having the ability to independently dial in the required temperatures means that all eggs, irrespective of the day degrees on arrival, can first feed at the same time.

Marine Harvest Scotland operate on four smolt inputs per year into their sea sites calling them Quarter 1’s through to Quarter 4’s (Q1 – Q4). Using the flexibility of the new recirculation unit the company now has the advantage of large smolt in each quarter, whether this be supplied as smolt from the hatchery of from the freshwater loch sites that have originally been supplied by parr from the hatchery.

The hatchery is designed around three main egg intakes, the first being early December. The December batch will produce 2.6 million large graded and vaccinated parr (+40g) for the freshwater lochs and 2 million smolt at 80 – 110g for a sea water entry in August. The company has purchased two new Maskon automated grading/vaccinating machines from Norway which will help considerably in this process.

The second batch of eggs are brought in during early March. This batch produces 3.2 million smaller parr (approx. 20g), not all of which will be vaccinated, for the freshwater lochs. The last batch of eggs is brought in during early May and produces 3 million smolt of between 110 – 120g for the February-March seawater input. Producing large early smolt enables Marine Harvest to significantly reduce the growing period at sea and thus reduce risk during the seawater phase.

The biological filters for each system are run independently from each other although all have the same standard layout comprising a central submerged up-flow fixed bed design flanked by two CO2 de-gassing units.

Water is pumped only once, with the water passing from the fish tanks back into the system by gravity. Water exiting the tanks flows into the first CO2 de-gasser through drum filters and then into the main biological filter for nitrification. Normally, ozone is added prior to the second CO2 de-gassing but John Richmond has made a design change whereby the ozonated water circulates back round the bio-filter and underneath both CO2 de-gassers within a large underground chamber. With this change in design John boosts the contact time thus allowing the ozone to work more effectively. Water exits the final de-gassing and is pumped directly back to the fish tanks via each tanks independent oxygen cone.

Water is further “polished” in a side-loop by passing a certain amount through a particle separator, a de-nitrification filter and a de-phosphorus unit. Using this design allows a significant reduction in make-up water. The feed capacity of each bio-filter is 1100Kg/day for the fry unit, 1400Kg/day for the parr unit and 1600Kg/day for each smolt unit.

Due to the system design there is no significant requirement for heating. The fish biomass and the heat input from the blowers and pumps means that the system only requires a 700 kw boiler which will be used infrequently, although it does have the required capacity to raise the temperature to 20⁰C in order to control an IPN outbreak if this ever occurred. Due to the inherent heat within the system there is more demand for chilling capacity if the ambient air temperature is high and this is catered for by three large ICS industrial chillers. Target temperature for fish growing throughout the cycle is a steady 15⁰C.

Bio-security is extremely important and once the hatchery is complete there will be one entrance for visitors who will be able to observe the different units through an observation area without the need to actually enter the units themselves. Entry for the staff will be through a different area with full bio-security protocols adhered to. As this system was not complete at the time of Hatchery International’s visit, access to the fry and incubation areas was restricted due to their being fish in these units.

Alongside the office, canteen and laboratory facilities there are also rooms for staff whilst on alarm duty. Each member has his/her own room with no sharing of rooms being required.

Feed is delivered to one central area with one feed pipe delivering feed into the building, again, for bio-security reasons. There are six silos for feed and feed is delivered to each on-tank feeder through an AQS feeding system which does not rely on air for delivery. The system works well and is extremely accurate, kind on the feed and requires very little maintenance.

The only part of the hatchery which sits outside the main building is the waste system. This system concentrates the fish waste by first of all settling the waste water, adding polymers and passing everything over a Hydrotech band filter. Concentrated sludge is stored in tanks alongside, until removal by bulk tanker.

The overall impression of the new facility is one of airiness, cleanliness and functionality. There is no over-complication and everything has been pared down to the necessities required for efficient smolt production within a building which has been designed around both the fish and the fish farm staff.

The project is referred to by many in Marine Harvest as “John’s Baby” and going on what Hatchery International observed during the visit it would be no understatement to say that he should be a “proud father.” Not only has the project delivered an extremely impressive smolt unit with maximum flexibility, and one which places it as being the biggest and most advanced in Scotland, but it has also been completed in an impressive time scale of just over a year from the first spade in the ground.