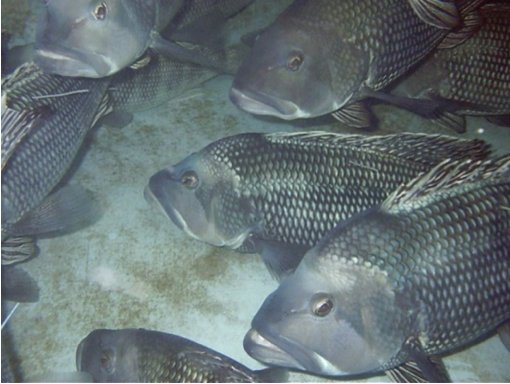 Increasing demand for—and price of—property in the coastal zone, plus the inexorable rise in sea level and weather-related storm surges, are making the inland cultivation of marine species increasingly attractive. However, the cost of providing water of suitable salinity (either natural- or artificial seawater) must be included. If the species being cultivated can thrive at low salinity, so much the better.

the US Atlantic coast, and is an important candidate for intensive aquaculture, possibly in low salinity recirculating systems. At the Aquaculture America 2015 meetings held in New Orleans, USA, Dr. Md Shah Alam from the University of North Carolina Wilmington, NC, described two laboratory-based feeding trials that investigated the effects of dietary salt supplementation on growth and survival of black sea bass reared under low salinity conditions.

In their first experiment, conducted in water at 15‰ salinity, Dr. Alam and his colleagues formulated six iso-nitrogenous (48% crude protein) and iso-lipidic (12% lipid) test diets that included graded levels (0, 2.5, 5, 7.5, 10, and 12.5% dry wt.) of natural sea salt (99.9% NaCl). Triplicate groups of juveniles (8.0g mean weight) were fed the six different diets in separate 75-l tanks supported by a recirculating aquaculture system at 15‰ salinity for 56 days. In experiment 2 (10‰), these same levels of salt-supplemented diets and an additional diet (0% salt, but no mineral mix;) were fed to triplicate groups of fish (9.4g mean wt) twice per day for 70 days. In both experiments, temperature and photoperiod were maintained at 21–23°C and 12:12  L:D, respectively.

After final sampling in experiment 2, the ability of the fish to tolerate a further reduction in salinity (0.5‰ per day) from 10 to 4‰ was monitored over a two-week period. Fish were fed their respective test diets during the acute hyposalinity challenge. Electrolyte analysis confirmed that sodium and chloride concentrations in the diets increased incrementally according to their formulation, while the concentrations of other electrolytes (K, Mg, Ca and P) were similar among diets.

Furthermore, fish fed salt-supplemented diets showed significantly higher survival (66-96%) when challenged with a reduction in salinity from 10 to 4‰ than those fed diets with zero salt (survival = 22%). In both experiments, whole body tissue electrolytes were not significantly different among fish fed the test diets.

The results show that black sea bass juveniles are remarkably euryhaline, maintaining optimal growth and survival at 10 to 15‰ salinity when fed diets with or without supplemental salts. Dietary supplementation with salt at 2.5 to 5% appeared to improve growth performance under low salinity rearing conditions (10-15‰), and dietary salt supplementation at 5-12.5% improved survival under acute hyposalinity (4‰) conditions.