One of the major challenges to fish-farming companies as they try to produce market-size fish more rapidly is that in many species the natural development of reproductive organs (testes and ovaries) – diverts energy away from growing, causing the growth rate to slow. 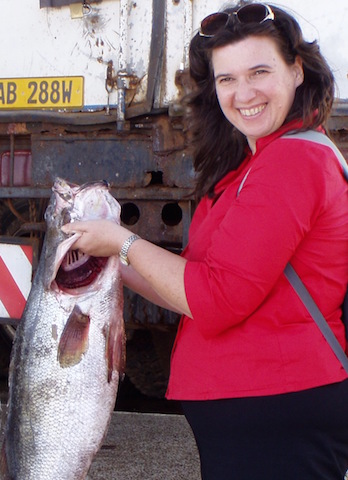 Berta Levavi-Sivan and her team at Hebrew University have synthesized a protein for use as a feed supplement that inhibits the fish’s reproductive development A new and innovative way to grow bigger fish faster by inhibiting the reproductive system has been developed by scientists at the Hebrew University of Jerusalem.

Robert H. Smith Faculty of Agriculture, Food and Environment, said she has spent close to 20 years in research with her students, looking for the hormones involved with the metabolism and reproduction of fish, and the genetic makeup of fish, in her case in tilapia (Oreochromis niloticus). She has identified two neuropeptides – neurokinin B (NKB) and neurokinin F (NKF) – which are secreted by the brains of fish and apparently play a critical role in their reproductive maturation.

Levavi-Sivan said that she and her team synthesized a protein for use as a feed supplement that renders NKB and NKF ineffective. This inhibits the fish’s reproductive development, thus leaving the fish with more energy for growth. This repro-inhibitor has now been licensed by Yissum, Hebrew University’s technology-transfer company, to a start-up company AquiNovo Ltd, established and operating within the framework of the Trendlines Group, which now produces the protein in powder form and continues to carry out experiments with it.

Levavi-Sivan said there are still many questions to be answered regarding the inhibitor, such as when to start feeding it to the fish and at what dosage. She confirmed that young tilapia fed the inhibitors for two months gained 25% more weight than those that weren’t given the feed supplement.

So far, she feels that tilapia should be given the supplement beginning just 10 days after hatching, and administered in all feedings. It may be that treatment should be continued up until the fish are harvested. She also said that NKB has been found in 20 different species of fish, opening up the possibility that the inhibitor could be effective in a broad spectrum of species.

In recognition of her work, Levavi-Sivan was given the Kaye Innovation Award for 2017. The Kaye Innovation Awards were established at Hebrew University by Isaac Kaye of England, a prominent industrialist in the pharmaceutical industry. The awards are designed to encourage Hebrew University faculty, staff and students to develop innovations with commercial potential that will benefit the university and society at large.