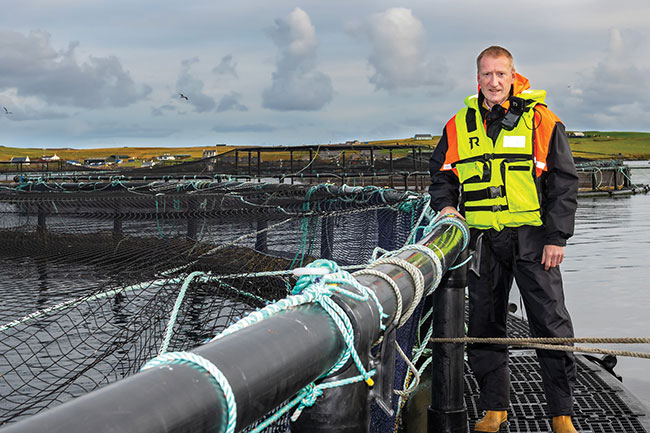 Scotland’s salmon farmers are living on a trade war knife-edge, months after warning the U.K. government in May that current post-Brexit policies are threatening to destroy export sales into the EU worth £372 million (US$580 million) a year.

Having only just begun to emerge from a painful and costly adjustment of EU export rules and regulations, the industry is desperate to avoid a fresh outbreak of cross-border aggression. After listening to U.K. government threats that it would impose its own export solution if the EU didn’t negotiate, Salmon Scotland made a direct approach to British Prime Minister Boris Johnson, urging him step away from a trade war.

Salmon Scotland is a whole supply chain organisation representing 33 producer and supplier companies. Originally founded as the Scottish Salmon Producers Organisation, the current organisation completed a name change in November last year. Since then, it has added 12 supply chain companies to its membership.

Since writing to the PM, however, Salmon Scotland has been treated to virtual silence from the British government. At the same time, the PM continued to use anti-EU rhetoric as a rallying call for his supporters, particularly as he battled for his own survival in office in the face of a steady stream of questions concerning his behaviour during the COVID-19 lockdown (the so-called Partygate scandal for which he was fined by the police) and the way in which he handled serious allegations against some his own ministers.

Having eventually resigned as PM on July 7, Johnson will be replaced as leader of the U.K. government in early September, with former British chancellor, Rishi Sunak, and foreign secretary, Liz Truss, fighting to replace him. Meanwhile, the threat of a trade war with the EU continues to rumble on.

The so-called Northern Ireland Protocol was designed to avoid such a border between NI and the ROI, protecting the integrity of the EU’s single market for goods while also enabling England, Scotland, Wales and NI to trade with internal freedom and for NI goods to be included in free trade agreements between the U.K. and third countries.

While this is clearly a complex protocol, it was agreed and signed by both the U.K. and EU as part of the U.K.’s departure from the EU, otherwise known as Brexit.

Go-it-alone
However, after a series of protocol issues, resulting in the suspension of NI’s devolved government, the Johnson administration set its sights on a new solution. This was unveiled by Liz Truss on May 17, in her role as foreign secretary, when she stated that while Britain would prefer to reach a negotiated settlement with the EU, the urgency of the NI situation meant that “we can’t afford to delay any longer.”

This “go-it-alone” message produced an immediate and sharp response from Salmon Scotland chief executive, Tavish Scott, who wrote to the PM urging the U.K. government to “step back from any sort of confrontation with the EU on trade.”

“The last 18 months have been tough for U.K. exporters,” he declared, pointing out that salmon farming businesses had been forced to cope with fresh border checks, extra paperwork and confusion, all of which had added to export costs and delays.

“We know this only too well, given that more salmon is exported from the U.K. than any other fresh food product.”

The Scottish salmon industry is rightly proud of the “robust logistics chains” which it has put in place to enable exports to be maintained to more than 50 different countries.  Within that global business, however, a massive 61 per cent of Scottish salmon exports end up with EU buyers, a trade which is currently worth £372 million (US$445 million) a year.

Having worked hard to make the post-Brexit trade with the EU operate smoothly, Salmon Scotland’s members are particularly anxious to avoid new export barriers being put in place, as threatened by Truss.

“We are now navigating the rough waters of Brexit more successfully,” wrote Scott to the PM. “Through considerable effort and a willingness to adapt, we have eased the burdens down to a manageable level. Indeed, our producers are now exporting more to the EU than ever before.”

He then added the crucial point that all the industry’s hard work would inevitably by undone by a trade war with Europe.

“Any deterioration in relationships between London and Brussels which leads to friction at the border, delays and queues for hauliers crossing to France, or extra costs for our exporters, could put us back to where we were at the start of last year when exports were in chaos,” he concluded.

Scott, representing 33 member companies at the time, pointed out that the EU market’s 61 per cent share of Scottish salmon exports was vital to the industry’s future. He further reminded the PM that the industry directly employs 2,500 people in Scotland, from hatcheries to processing units, and supports more than 3,600 suppliers. As a result, around 10,000 people depend on farm-raised salmon for their livelihood.

Asked for a mid-July update on its attempt to head off a trade war, Salmon Scotland told Hatchery International that at a time of rising costs and concern about food security, the last thing farmers, or Scotland, needs is a trade war with our partners in Europe. Please don’t treat us like a “political football,” it added.

Scott, meanwhile, commented: “We pray, literally we pray, that sensible heads in the government will calm down the rhetoric and we’ll be able to continue to trade.”

Despite the industry’s deep concern, U.K. government ministers continue to downplay the seriousness of the trade war threat, an approach voiced by Alister Jack, secretary of state for Scotland, when questioned by Hatchery International.

“We don’t believe there will be trade wars,” said Jack, who is a member of the British Cabinet. “We spend a lot more with the EU than they spend with us, first and foremost. Secondly, what we’re proposing for the NI protocol is a ‘tweak.’ We are not preparing to tear it up, we are proposing to tweak it.

“The tweak is quite simple. It’s a green channel for goods going from Great Britain (England, Scotland and Wales) into NI and a red channel for goods going from Great Britain into the ROI, or the U.K. into the ROI.  That is a really important difference to what we have now. Through the red channel we still have a trusted trader scheme, and we don’t see how that isn’t a very sensible solution.”

Despite Jack also saying that he was “in discussion” with Salmon Scotland, a point made to Hatchery International on June 23, the brief update given by Scott on July 19, still referred to the need to pray for “sensible heads” in the government.

ROI Taoiseach (Prime Minister) Micheál Martin was equally blunt in his comment on the issue, stating that a U.K.-EU trade war would be “shocking” and “unnecessary” and that the U.K. Government needed to “get into the (Channel) tunnel and negotiate” over changes to the post-Brexit trade arrangements for NI. ROI and the EU “do not want a trade war” with the U.K., he added.

Away from the “trade war” or “just a tweak” debate, the UK Government is continuing to seek and sign free trade deals with several non-EU countries, some to replace previous EU-based deals and some to create completely new agreements.

Animal health and welfare concerns have also been voiced by the UK’s Royal Society for the Prevention of Cruelty to Animals (RSPCA) who, of course, have their own assured standards for farm salmon production, as applied to its suppliers by one of the U.K.’s largest retailers.

Speaking about agricultural species, RSPCA Director of Advocacy & Policy, Emma Slawinski said she was appalled that the U.K. government had “deliberately avoided any parliamentary scrutiny of its terrible trade deal with Australia.”

“The UK Government vowed to be a global leader for animal welfare but with no transparency or formal independent mechanism to scrutinise this deal, farm animal welfare standards are likely to be sacrificed for this quick trade agreement,” she said. “Production methods in Australia are lower than ours in five key areas including permitted live transport times which are double that of here and the practice of mulesing sheep which is illegal in the U.K.  So, we know that products that would be illegal to produce in the U.K. will be flooding UK supermarkets by the end of this year putting U.K. farmers’ livelihoods at risk.

“An FTA without safeguards sets a dangerous precedent for future deals with countries like India, Mexico and Canada. We urge the U.K. government to rethink scrutiny and transparency and commit to a Parliamentary debate for future trade deals so as not to betray the public, farms and animals.”

At the same time, an influential U.K. House of Lords committee has urged the British government not to rush the conclusion of the UK-India FTA which it is currently negotiating. The committee’s view is that the current objectives for the deal “come across as overly ambitious or unrealistic” with some aspects seeming to be “particularly unattainable.”