East Coast hatcheries react to impact that goes beyond shell-building 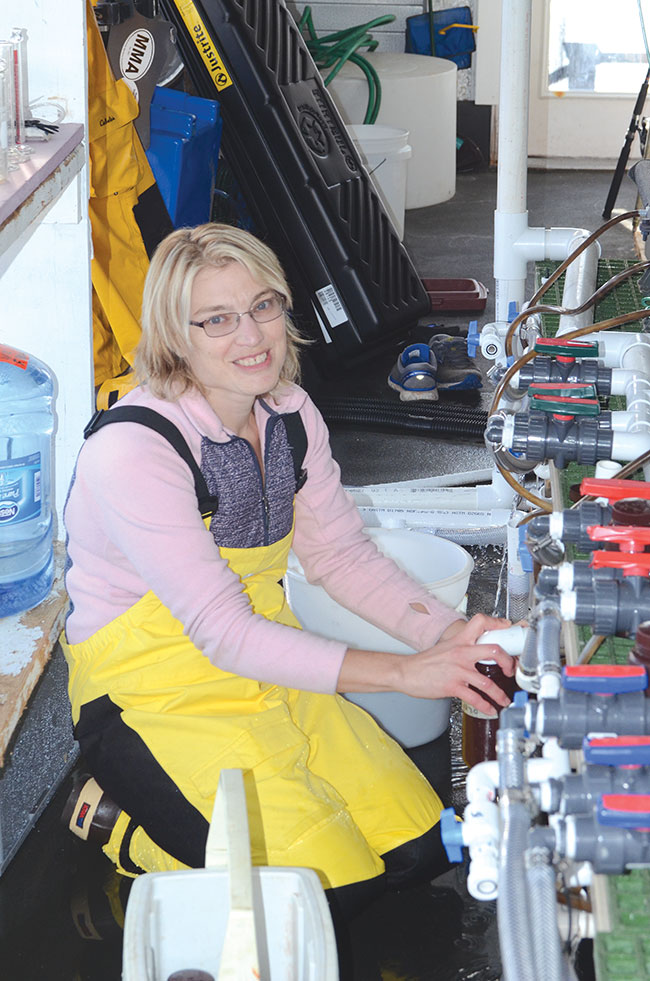 Every good researcher starts with a question. But Dr. Shannon Meseck and her colleagues at the Milford Laboratory in Connecticut were doubly aggressive, asking two questions related not only to their study but its implications: “What is the effect of ocean acidification on Eastern oyster larvae and should hatcheries be concerned?”

Last April, the Milford team, in partnership with Mook Sea Farm, used laboratory experiments to examine the impact of ocean acidification (OA) on pre-set oyster larvae. Larvae were exposed to different levels of both dissolved carbon dioxide (pCO2) and food.

The findings were clear and expanded knowledge beyond the impact of OA on shell-building: oysters grow more slowly under increased acidity in the hatchery. In fact, high levels of pCO2 inhibit growth to the same degree that cutting food in half does.

Although deeper analysis is still to come, Milford’s study alerts hatcheries that it is prudent to monitor and manage the acidity of incoming water. Karen Rivara, marine biologist and president of Aeros Cultured Oyster Company on Long Island, New York, echoes the advisory. “pH is something all hatcheries should be monitoring,” she says.

But the degree of concern depends significantly on where the hatchery is located and when the broodstock is spawning, Meseck adds.

West coast failures
Concern among scientists has been growing as the partial pressure of carbon dioxide in seawater from the coast of Virginia to the Gulf of Maine has increased by an average of two percent from 2007 to 2015, according to Milford Laboratory, which is part of NOAA’s Northeast Fisheries Science Center.

The ocean absorbs about 25 percent of the carbon dioxide released into the atmosphere. It reacts with water to form carbonic acid, lowering pH in the process known as ocean acidification. Along with the increase in acidity, there is a decrease in carbonate ions.

That is bad news for marine life. For bivalves, those carbonate ions are important to shell-building. Scientists have also been gathering evidence on how OA affects growth and metabolism.

“A lot of articles on the west coast said that oysters were in trouble,” Meseck points out.

With some 50 hatcheries up and down the East Coast of the U.S., Milford researchers decided to ask how concerned these eastern counterparts should be.

The investigation
To get the data to pursue this question, Milford partnered with Mook Sea Farm, an oyster grower on the Damariscotta River in midcoast Maine that has been rearing Eastern oysters (Crassostrea virginica) from egg to adults since 1985.

Mook’s hatchery experts provided information on their procedures for feeding at certain larval stocking densities, which the researchers replicated back in the lab in Connecticut during the 18-day experiment. One level was considered hatchery food level and the other was half of what a hatchery would typically feed.

At low food levels, pCO2 did not have a significant effect on growth. Food was the influence. But at the level of food typical of a hatchery, researchers were able to observe differences in growth under different levels of CO2.

Under hatchery levels of food, larvae experiencing the highest pCO2 grew more slowly – approximately 32 percent smaller than those under lower levels of pCO2 with the same amount of food.

“That is why we observe a difference in the growth rates under different levels of pCO2 when they have plenty of food to eat,” explains Meseck, who is a research chemist.

Mitigating measures
Metrics related to OA vary by time of year and geography, not only with differences between, say, Casco Bay in Maine and the Chesapeake Bay, but between the upper estuary and the lower mouth of Chesapeake Bay. That’s why ongoing monitoring at each hatchery is so important.

“It will always be in the best interest of a hatchery to be monitoring pH and making adjustments, if necessary,” says Dr. Meredith White, director of research and development at Mook Sea Farm. The Maine operation has been buffering hatchery water since 2009.

“If other hatcheries wish to buffer as well, it is good for them to know that it is a very simple and relatively inexpensive process,” she says. Mook purchased a good-quality pH meter to measure the pH of the water when tanks are filled and adds buffer to achieve an optimal pH.  “Based on Shannon’s work, that pH should be at least 8.1,” she adds.

For flow-through systems, White notes the hatchery uses a pH controller with a peristaltic pump dosing system to buffer when it is necessary.