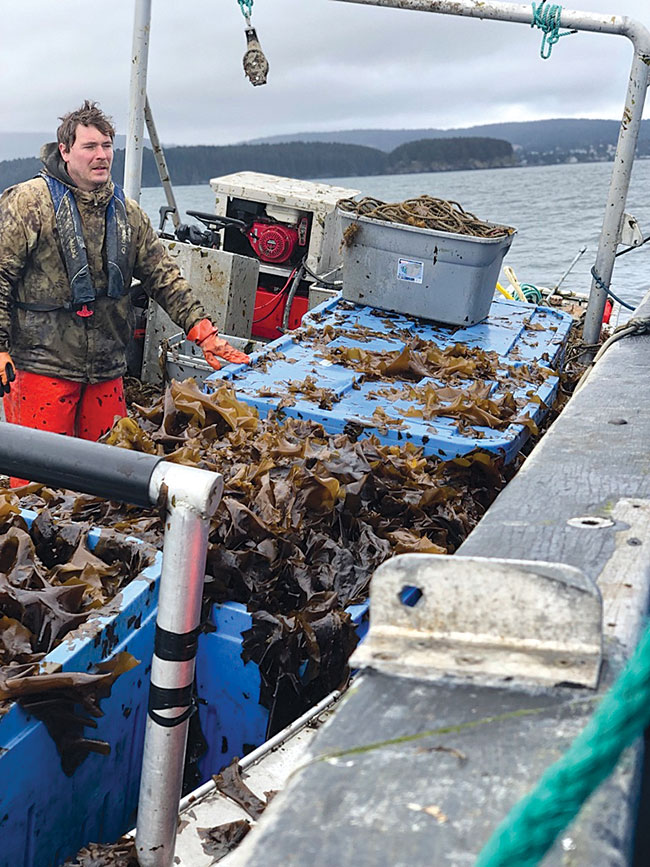 The recent expansion of kelp farming in Alaska has Julie Decker, chair of the Alaska Mariculture Task Force, excited.

“The 2018 Alaska Mariculture Development Plan aims to grow the mariculture industry in Alaska by $100 million in the next 20 years,” Decker explains. “The new applications we have seen from kelp farmers over the last two years are pretty exciting.”

Wild fish capture is still king in Alaska, where growing fin fish is illegal. That leaves mariculture, the farming of all other aquatic species, to balance the highly seasonal work of ocean fishing. Oysters are the top cultured species in the state. But the industry for sugar kelp (saccharina) and ribbon kelp (alaria) is expanding.

Filling the gap
And that’s with only four licenced growers. “It’s a two-year wait to get an aquatic farm licence approved,” Decker acknowledges. Of the 47 applications since 2017, only eight new farms, two hatcheries and one farm amendment have been processed. As of mid 2019, there is a backlog of 36 licence applications waiting to be approved, 26 of those are for new farms.

“It’s about a 50/50 split between kelp and oyster applications,” says Decker, with six applying to grow both.

While Decker acknowledges that kelp is “hip” right now, she says that trend is not what is drawing Alaskans to invest money in the industry. “It is the lowest cost entry point of any species in aquatic farming,” she points out.

“Fishermen have the boats and the experience working on the water, but that all sits idle for months of the year,” she says. Kelp is planted in the fall, after fishing season, and is harvested in the spring before fishing starts. “It’s a natural fit for their excess capacity.”

Legal matter
A lawyer, with life-long ties to the Alaskan fishery, is starting the largest kelp farm to date. Markos Scheer is a member of the Alaska Mariculture Task Force who was practicing in Seattle. He says he was waiting for someone else to get working in the business.

“I finally decided that someone should be me,” says Scheer.

Scheer has a 126-acre lease near Craig Alaska on the east side of Prince of Wales Island. He is finishing a nursery build at the Oceans Alaska hatchery in Ketchikan (see side bar). Sea Grove Kelp, a division of his Premium Aquatics company, plans to seed an array that is 3,000 feet long and 600 feet wide with 300 long lines this fall.

“The question is, can we produce kelp at a value that is competitive in the world market,” Scheer asks. “Our projections say that we can.”

Scheer says he did not have any opposition to his licence application.

“Kelp is a pretty hard thing to oppose,” he notes, adding he expects that harvesting and processing will support 20 jobs. “The response typically has been very positive, and I think we will see lots of others get in.”

Some of those others will be working with Beau Perry and his California company Blue Evolution. Blue Evolution grows seaweed on land-based farms in Mexico, and is bringing their skills north to the Kodiak area of Alaska.

Blue Evolution has an agreement with the U.S. National Oceanic and Atmospheric Administration (NOAA) to produce seed lines at the Kodiak Fisheries Research Center. While the company is waiting on the approval for its own farm, it is currently and will continue to work with “partner farms.”

Growing the market
There is a lot of research and development needed in this new industry in Alaska, says Perry.

“We are selling seed to growers, helping them learn how to grow and we agree to buy their kelp crop back,” he says. “So, we are sharing the risk.”

The typical farmer is also a commercial fisherman, Perry notes. “We see a lot of value in these partner farmers who own their own concession.”

Processing is contracted to local businesses, but as an integrated company, Blue Oceans sells its own kelp products. And Perry is bullish.

“Scale is important, there is a market there and we need to go big. We hope to double production next year,” he says.

Decker says state coffers are down from lower oil revenues, “but they support us where they can.” The Mariculture Revolving Loan Fund gives growers access to funding of up to US$300,000.

Mike Stekoll, professor at the University of Alaska Southeast, is leading a project to improve techniques along the nursery growth chain, funded by Sea Grant and Blue Evolution

“We are looking for efficiencies, starting with the best time to collect broodstock and how to avoid contamination of that stock,” says Stekoll.

“We are also looking at adding nutrition to the water and more automatic ways to wrap the string on to the setting pipes.”

The ultimate goal is to perfect direct planting of seed on to the long lines and doing away with the string all together, says Stekoll, who has been studying kelp culture in Alaska since 1983.