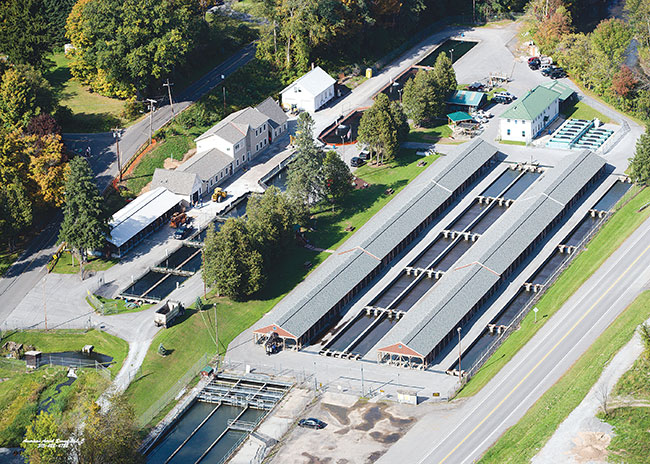 The discovery of invasive zebra mussels in an outdoor raceway at the Rome Hatchery will cause adjustments to the state’s fish stocking plans.

The New York State Department of Environmental Conservation (DEC) announced the discovery of invasive zebra mussels in an outdoor raceway at the Rome Fish Hatchery. In response, the department is ensuring that fish from the hatchery will only be stocked in waters already inhabited by zebra mussels. Other decisions about the type and numbers of fish stocked in other water bodies are currently being undertaken by DEC fisheries managers.

Zebra mussels are native to Eurasian fresh waters, and are theorized to have arrived in the Great Lakes in the 1980’s through ballast water discharged from European ships. The mussels can negatively impact ecosystems in a variety of ways, including incapacitating native mussels and filtering out algae that native species rely on for food.

Lori Severino, DEC public information officer, says that it is not clear how zebra mussels entered Delta Lake, the hatchery’s water source. However, efforts to remove the mussels from the hatchery raceway in which they were found are unnecessary at this time.

“Very few zebra mussels have been found to date and most of what has been discovered is in the veliger (larval) stage,” says Severino. “Inflow and outflow pipes continue to flow freely and no mechanical harm has taken place as of yet.”

Severino notes that removing the mussels from the lake itself is virtually impossible and while technology does exist to filter mussels from the incoming water supply, it is not 100% effective. As such, DEC is evaluating other mitigation options.

In the meantime, Severino encouraged boaters and fishermen in the area to follow the “clean, drain and dry” protocol, to ensure invasive species are not moved from one waterbody to another.

“The young stages of zebra mussels are microscopic and can be transported in water containing compartments, bail buckets, etc,” says Severino. “In addition, older zebra mussels (which can still be quite small) can attach to boat hulls, trailers and aquatic plants.”

The Rome Hatchery raises over a million brown and brook trout eggs annually for stocking in 11 New York counties.