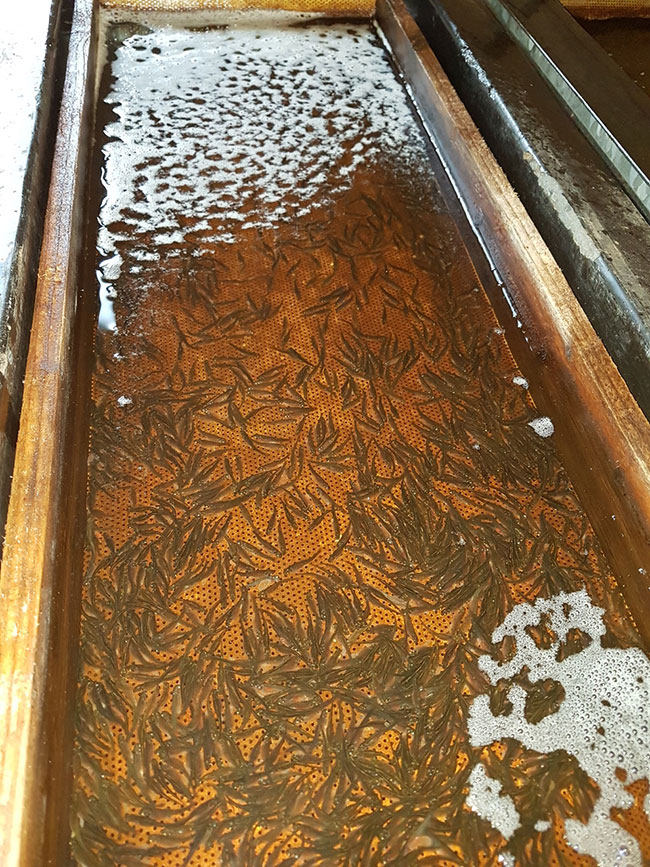 The Oughterard Trout Hatchery (OTH), located in its namesake town in Ireland, has been around for almost 120 years and has had its fair share of ups and downs. But nothing compares to what it is currently facing, according to hatchery manager John Gibbons.

“The most serious threat to the hatchery and its operation was the illegal introduction of Northern pike, Esox Lucius, to the Owenriff system circa 2008. It is an exact replica of the situation in South Central Alaska where Pacific salmon fisheries have been destroyed by pike,” Gibbons tells Hatchery International.

The 68 square-kilometer Owenriff system is a series of lakes interconnected by a river, which is a tributary of Lough Corrib.

The Oughterard Trout Hatchery is situated on the Owenriff river and hatchery brood stock are Owenriff spawned fish. According to Inland Fisheries Ireland (IFI), 15 percent of all Lough Corrib trout are spawned in the Owenriff system.

“The invasive pike population are systematically destroying a unique ecosystem that has existed since the last Ice Age. Atlantic salmon also spawn in the Owenriff system and have also been severely impacted by the pike introduction,” Gibbons says.

In October 2017, a delegation of anglers representing Lough Corrib and the Owenriff went to Brussels, Belgium to meet with top officials from the European Commission’s Directorate-General for the Environment regarding the invasive pike issue.

“Our lobbying of European officials is continuing at this moment,” Gibbons says.

Infestation has reached such a critical point that OTH, in a Facebook post, has begun to question the wisdom of having to release all the fry they produce in the Owenriff system, under its hatchery license from the IFI. They have documented evidence of the ecological damage caused by pike in the Owenriff system.

As a solution to the situation, the Oughterard Anglers and Boatmen Association (OABA) issued in June a four-point demand for IFI. This includes for “IFI to follow international best practice by issuing an immediate and unrestricted ‘catch and kill’ order for all invasive pike in the Owenriff system.” IFI has not commented on these demands as of press time, says a volunteer, who requested anonymity.

In the backdrop of all these, one thing has remained constant for OTH since its inception: keeping a tight production schedule.

Oughterard “is generally accepted as the greatest wild brown trout fishery in the world.” And it has a big role in maintaining such a stature.

A unique facet of the hatchery is that just as it collects broodstock at the start of every cycle, it also releases these back to Lough Corrib during the last stage, after stripping them of ova and milt. One hundred percent of the fry produced are released throughout the Owenriff system, contributing to a healthy trout population.

“For netting operations and fish stripping, we need about 20 core volunteers but more are welcome to help out at any stage. During the egg incubation period, less volunteers are required,” he says. There has never been a time when they were lacking in volunteers.

All who are interested are taken in. “Every Corrib angler who has an interest in wild salmonid sustainability is welcome to help out at any time, nobody is turned away,” he says.

He gained expertise in hatchery operations by “helping as a volunteer, like all Corrib anglers who give back with their time and effort during the angling off-season.” He was in his 20s when he started volunteering.

The group is in action for only four consecutive months every year but this period is packed, necessitating working through the holidays. Year in and year out, this cycle has been going on for generations with conservation in mind.

The Lough Corrib Angling Federation provides funding, which covers electricity costs, council rates and insurance. As everyone is a volunteer, there are no paid employees.

Conservation and hatchery are at the forefront of the association programs.

The hatchery has an interesting history that is worthy of several rounds of pints in a pub. The original location is the site of the world’s first commercial salmon hatchery, which was built in 1852. This is credited for “inspiring others throughout the world to commence what we now know as salmonid aquaculture.”

It became a trout hatchery in 1900, when the Department of Agriculture, on behalf of the Corrib Fisheries Association, redesigned and equipped a building. It was operational until the association was dissolved in 1925. The structures began deteriorating.

The current trout hatchery sprung from an initiative in 1938 of a group of anglers who, while seeking ways to improve trout fishing at Lough Corrib, decided to rebuild a new trout hatchery and raised funds.

A major refurbishment was done in the 1990s, resulting with new stands and pipework for the incubation trays. To prevent silting of fish trays, a filter unit was built. A new water supply was installed and laid upstream. Improving access even more, a concrete bridge was also constructed.

Next comes the collection of broodstock. “Net setting is done in the Owenriff River to trap a quota of cock and hen wild brown trout on their way to their spawning grounds from Lough Corrib,” the volunteer says.

After the completion of netting operations, the broodstock is brought to settle in the hatchery holding pond for two to three weeks with the cock and hen fish separated.

On two consecutive weekends in early to mid-November, the hen and cock are stripped of their ova and milt. The fertilized eggs are carefully spread out in various egg trays, which are kept in total darkness. All stripped fish are returned immediately to Lough Corrib.

This last stage requires the most intensive attention with the daily monitoring of developing eggs and removing any dead eggs with “great care.” This period runs until February, when the ova hatch. And even on Christmas Day, this has to be done.

Once all the ova are hatched, the fry are distributed throughout the Owenriff system by the same volunteers per the IFI license requirements. Fry are released when they still have their yolk sacs. This keeps their development as natural as possible.

Looking ahead, Gibbons says they have no improvement plans at this stage because the hatchery is run seasonally on a tight budget. There is minimal expenditure apart from general maintenance and utilities.

“However, considering the dire situation of the Owenriff with respect to invasive pike, we may start to rear Atlantic salmon again if we can obtain a license from IFI,” he says.