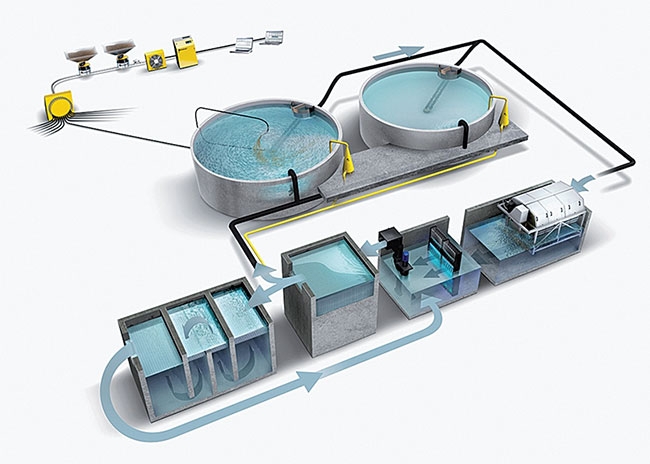 Representatives from AKVA group and Veolia

Both groups have developed modified versions of traditional RAS systems, enhancing efficiency and bringing modern technology to the forefront of aquaculture management.

AKVA group has teams dedicated to supplying and servicing land-based operations in Norway, Denmark, Chile and Canada. Their new design, implementing their Zero Water Change (ZWC) technology, uses 10 times less water than a traditional RAS system. Only 0.1 percent of total system water volume is added to the system per hour, taking 40 days to fully exchange all of the water in the system.

ZWC systems require only 30 to 40 liters compared to basic recirculation systems which need 300 to 500 liters of water per one kilogram of feed introduced. ZWC systems also lower the impact on the environment, as not only are they designed for less power usage, but with de-phosphorus structures in place almost all excess waste is removed from the system. The same can also be said for nitrogenous waste.

AKVA has approximately 40 ZWC RAS systems installed or in production around the world. One of those sites is Tytlandsvik Aqua, a production facility for large smolt in Hjelmeland, Norway with an overall tank volume that will exceed 15,000 m3. Once this system is in operation it will only require a freshwater supply of 250 liters per minute.

In contrast, Veolia produces pre-engineered modular systems, such as their RAS2020 design. With a total facility footprint of only 2,600 m2, the RAS2020 system is extremely compact, helping reduce construction and energy costs. They are designed to produce 1,200 metric tonnes of fish per year and are well-suited for species such as Atlantic salmon (Salmo salar), rainbow trout (Oncorhynchus mykiss) and kingfish (Scomberomorus cavalla), among others.

Typically, the system runs at a 99.6 percent recirculation rate, but water intake and effluent may be modified to meet the specific demands of each site.  There are currently three facilities with installed RAS2020 systems in the world: Swiss Alpine Fish in Switzerland, Sashimi Royal in Denmark and Fredrikstad Seafoods in Norway. The first installation in Canada is scheduled for completion in 2019 with a company called CanAquaculture located in Quebec.

Veolia also has their AQUAVISTA platform available to producers to track their system performance in real time. This digital technology is designed to improve efficiency and allow monitoring even from remote locations. Round-the-clock support is available through the app and monthly reports can be generated from the data collected, granting easier and better management of the facility.

AKVA group and Veolia are just two examples of companies revolutionizing the way fish are farmed worldwide as interest in land-based aquaculture continues to grow. Innovation continues to play a vital role in the development of this expanding industry and discovering new ways to maximize production potential while reducing cost is the key to its success.