Norwegian farmed salmon producer Atlantic Sapphire is making a significant move into the United States with the ongoing construction of a major RAS facility in Florida. The Atlantic Sapphire Miami Bluehouse will bring the technology and techniques established for the past seven years at their Danish pilot facility to America. 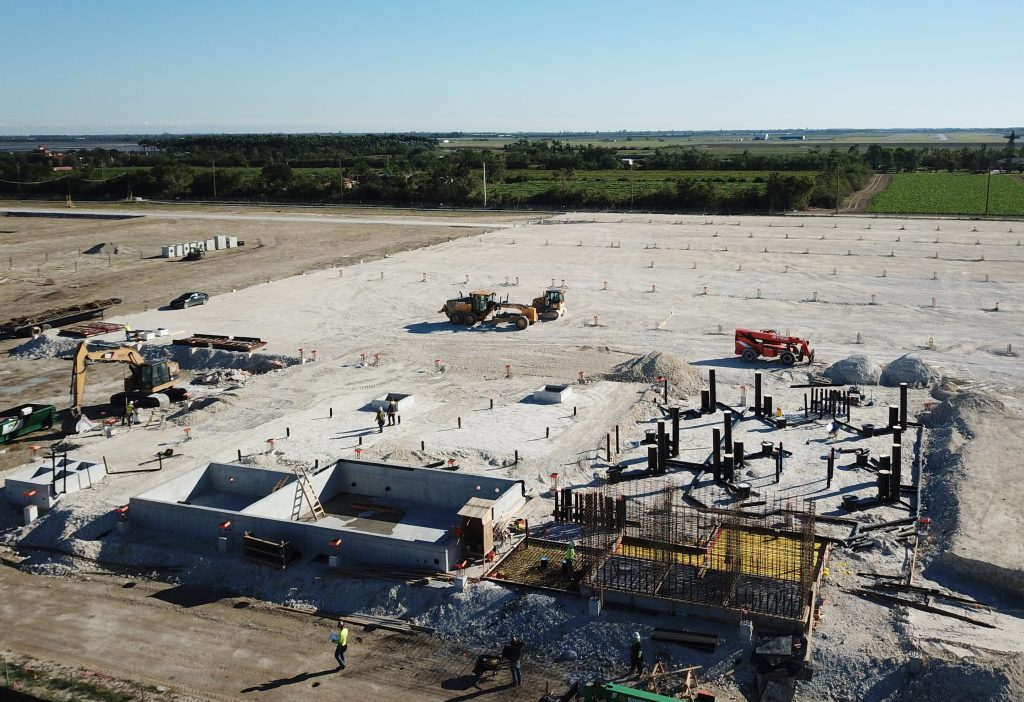 Construction is underway at the Atlantic Sapphire

Bluehouse technology, as envisioned by Atlantic Saphire, involves bringing all phases of aquaculture production together – combining a hatchery, a farm and production facilities under one roof that delivers customer-ready products.

The initial phase of the project, which will cost roughly $100 million, will be capable of harvesting and processing 10,000 metric tons of round-weight salmon and will be completed by early 2020. Over the following six or seven years, phases two and three of the project will increase capacity up to 90,000 tons of salmon annually.

“We are confident we have finally developed the right technology to raise great tasting, market size (4kg+) fish in closed containment,” says Atlantic Sapphire chief operating officer, Dharma Rajeswaran. “As the United States is importing about 90% of its seafood and as the world population grows, we need to secure local production of healthy proteins. Thanks to our Bluehouse technology, we are able to raise salmon that are normally farmed in net pens in remote locations, closer to the market in the continental United States.”

Rajeswaran says the key difference between the pilot Danish project and the Florida facility will be the establishment of various independent water systems to mitigate risk in case of an incident in one of the systems. Recirculating aquaculture system (RAS) technology is evolving and the technology used in Miami, and in their phase 2 projects in Denmark, is well beyond what was used in the pilot project.

Rajeswaran says that the remaining challenge to the establishment of the facility is meeting their construction timelines. He is confident, however, that the project will be on target thanks to the hard work of the team they have established, including both their own internal efforts and external partners, such as Danish water treatment and RAS supplier Billund Aquaculture and construction firm OHL.

Water infrastructure
One of the key features of the new facility is the water infrastructure. The facility has access to bio-secure artesian fresh and saltwater, which Rajeswaran says is the key to raising healthy and happy salmon.

“The Biscayne and Floridian aquifers provide fantastic supply of fresh and especially saltwater which we need to raise salmon,” says Rajeswaran. “The most important particularity of the Floridian aquifer is that it’s 20,000 years old pure water that has never seen modern contamination. We are also permitted to use the boulder zone which is the same layer under the aquifers where the city of Miami discharges it’s effluents to discharge water after thoroughly filtering and cleaning it.”


Related
From hobby to hatchery
Peracetic acid use in RAS: Findings from research at The Conservation Fund’s Freshwater Institute
Innovations in RAS technology
Another milestone for RAS farmer Atlantic Sapphire