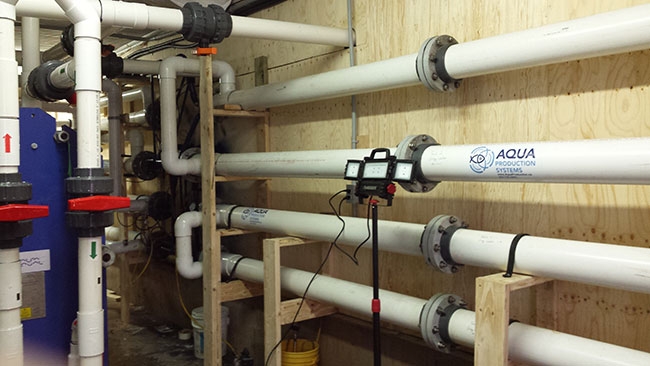 Chillers must be specified with a heat transfer rating (kW or Btu/hr for example) at a specific water temperature.  Without the temperature being specified Consider these two scenarios

Why the dramatic difference? Temperature.
In the first case, the fish were exposed to ambient temperature (other than heating to prevent lower lethal temperatures). In the second case, a temperature suitable for rapid growth was maintained continuously. Which business would you prefer?

It is widely accepted and a widely practiced staple of aquaculture that fish growth varies significantly with temperature. This is due to the poikilothermic nature of fish. As temperature rises, so does the metabolism of the fish. Metabolism rate affects feeding rate, which affects the rate of waste production, and the rate of respiration. Therefore, temperature is a variable that contributes to the design of every major component of a RAS system.

So, what happens if the farmer wants to grow fish at 13°C but the cooling system is only capable of maintaining 15°C in summer months?

This situation occurred at a land-based RAS farm, which we will call Business C. The CEO of the farm was giving a presentation outlining the performance of the facility over its first few years. He noted two problems.  First, “the chillers were not able to keep the temperature down to 13°C.” Secondly, the CO2 degasser system was not keeping up with its load.

After his presentation we discussed the connection between these two symptoms. The degasser would be sized for the expected loading at 13°C by the RAS designers. Is it possible that the degassers work when the system temperature is maintained at 13°C because they can handle the load that the fish create at that temperature versus at 15°C?

When reviewing the cooling system, it was determined that the chillers were efficient. Unfortunately, when the process was set to maintain 15°C in the tank, the chillers were chilling water to 4°C. This resulted in a 25 to 30% decrease in chiller capacity. This is a common design error that increases the capital and operational costs.  About 25 to 30% more chillers are needed to meet peak cooling demand. Not only does 25 to 30% mean more energy consumed, but the electrical demand charge will likewise increase. [As an aside: a chiller ‘pumps heat’ from one temperature to another. A water pump is sized proportional to the height (or lift, or head) that the water must be pumped. Similarly, a chiller motor is sized proportional to the temperature difference that the chiller is pumping heat from and to. The smaller the temperature difference, the larger the amount of heat a given chiller will pump – and vice versa.]

Devastating consequences
The consequences of an extra 30% cooling cost can be devastating. By the time they are discovered, the capital funds have been spent and finding more funding can be difficult or even impossible. In other cases (such as the farm mentioned above), the finding was that the cooling system lacked 30% of the intended capacity. As a result, fish growth was negatively affected.

In Business A and Business C, the operators were not able to maintain the temperature they wanted. How does this change a business?

In Business A, the farm is delaying growth by 12 months – in other words someone is taking more than twice as long to get the return on their investment. In Business C, the technician can only feed as much as the degasser can handle, even if the fish are hungry for more. The energy bill still needs to be paid, as do the staff, and all the other costs of owning the farm. RAS is too big of an investment to allow fish to grow slower than the business plan estimated.

Chillers must be specified with a heat transfer rating (kW or Btu/hr for example) at a specific water temperature.  Without the temperature being specified

Calculating the load
The converse is also true – every part of the system contributes to the temperature picture. Every motor is adding energy to the system. Every organism (fish or nitrifying bacteria, etc.) is adding heat to the system through metabolism. Aeration and water addition, and building envelope construction introduce ambient temperature effects. The trend to tighter RAS is bringing some high cooling loads and, in some cases, even eliminating heating.

There are two goals in the design of a heating or cooling system: an efficient system and an efficient engine.

Car manufacturers have made great strides in increased fuel mileage by reducing the overall weight of the car. RAS cooling loads have been reduced by the introduction of more efficient processes. Every kWh that you pay for is energy entering the RAS system. If you are in cooling mode, you need to pay again to run the chiller to remove that kWh of energy from your system. Otherwise, the water temperature goes up. Every calorie of feed put into the system represents calories that need to be removed to maintain temperature.

The sequential order of focus in designing a temperature control system is as follows:

Process includes things like how much new water or ambient air is introduced to the system; how fast waste feed can be removed from the system; or how many levels of heat exchange are between the heating/cooling engine and the water to be cooled (one of the problems with the Business C case). One of the most impactful ways to decrease the process demand is through heat recovery of new water and/or air for degassers or MBBR.

Controls are the second key contributor to efficiency. Drives are recommended on air and water pumps with variable loads. Especially in RAS where cooling is being applied – remember that there is a 25% (or more) cost for the chiller to remove the energy that was already paid for.

Only once the process and controls are determined should the cooling/heating equipment be looked at, with an eye toward what is the most cost-efficient choice.

There are many options for heating equipment and fuels with large cost variations geographically. Cooling options are more limited, although often more complex. There are two types of cooling: active and passive. Active requires a chiller, passive could be a deep-water line on the coast that draws in 5°C-water year-round, or it could be a cooling tower for the warmest applications.

Remember that the capacity of a chiller will change with the temperature of the water going through and/or the air it is using for cooling the condenser.  Be sure to get a capacity rating at the temperatures you will be operating at so that all chillers being considered are comparable.

Philip Nickerson, P.Eng., is one of the owners of Pronova Marine Products Incorporated.  Pronova leases marine and freshwater tank space and husbandry services at a land-based farm in Nova Scotia, Canada. He also owns and operates Aqua Production Systems, an aquaculture company specializing in heating and cooling designs. He can be reached at: philipnickerson@gmail.com
Print this page


Related
Singapore’s Apollo Aquaculture ramps up vertical farming
One size does not fit all
A close look at RAS technology
1 in 10 Atlantic salmon will come from RAS by 2030: Billund exec