Hunter Pearls Fiji has opened a hatchery and research lab in Savusavu, Fiji. The hatchery is able to house 4.5 million black-lip oyster larvae (Pinctada margaritifera) and will help the company recover after the harrowing impacts of increasingly severe tropical storms in recent years. Founder Justin Hunter, however, is keeping mum on much of the details, and with good reason. 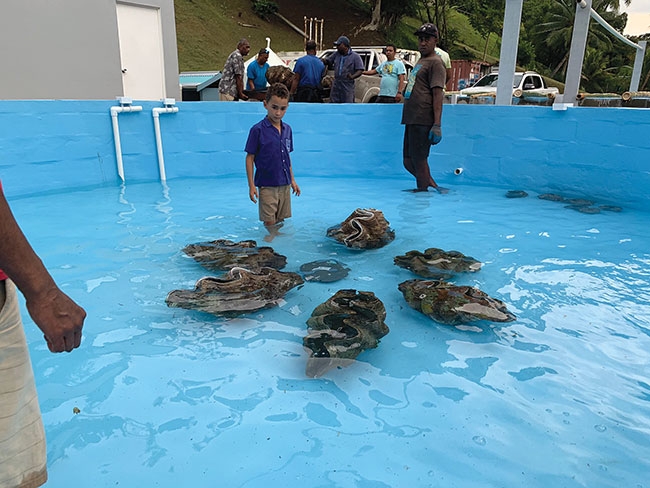 “I’ve got to be really careful because nobody’s been able to do the black-lip commercially except for us,” says Hunter. “It’s taken me a long time to crack this thing and I’ve got to be careful. When you’re dealing with luxury, part of the definition of luxury is rarity, isn’t it? Luxury is about beauty, rarity and exclusivity.”

Hunter began his career with Taylor Shellfish in the U.S. and helped the company establish hatchery and nursery facilities in Hawaii, which was highly influential on him. Seeing how hatcheries could run all year round and grow oyster larvae over winter months in a tropical climate inspired him to return to his mother’s homeland of Fiji and establish his operation.

Hunter has worked with edible oysters, mussels, geoducks and clams in his career, but nothing has been as difficult as growing black-lip pearl oysters. While Hunter won’t divulge much of the secret to his success with the black-lip, he is willing to explain some of the challenges of working with the species in the tropical climate.

“It’s about the environment and the holding capacity of our water – the densities that you can work with. The fact that ideal temperature for us is about 26 degrees creates a serious bacterial problem and the black-lip is notoriously sensitive to food, waste, etc. It’s a frantic race to keep all aspects of larval and food culture as clean as possible.”

J. Hunter Pearls previously established a hatchery in Fiji in 2004, but it took a long time to be able to consistently produce good stock where they could select traits to accentuate certain colors. Just as the facility was beginning to hit its stride, along came Cyclone Winston in 2016.

“We had multi-million dollar losses across our companies,” says Hunter. “We lost 30 kilometers of grow-out line, millions of dollars in biological assets which should be producing for us now. And the hatchery, because it was up the coast, in an exposed and prone area where it had access to water, we had three basically ‘tsunami waves’ that went right through and wiped it completely out.”

The experience made Hunter a passionate advocate on the topic of climate change – he is working with the United Nations on The Blue Pledge for Sustainable Pearls, advocating for sustainable practices and climate change mitigation.

“Pearl oysters are filter feeders that require pristine water conditions in order to produce high-quality pearls. They are also recognized as an indicator species, meaning that any decline in water quality has a direct impact on oyster health, pearl quality and oyster mortality. In order to protect their investments, pearl farmers naturally adopt the role of stewards of the seas in which they farm. We believe pearling companies engaging in sustainable and responsible farming practices could serve as pioneers in developing circular blue economies.”

In addition to Hunter’s own investments, the new hatchery was made possible by support from the European Union and the Fiji government. Hunter’s next passion project: developing commercial scale operations for giant clams and sea cucumbers.

“There’s a few bottlenecks, but I’m very confident we can do that. I see that being a much bigger contributor to the South Pacific, to these tropical islands, and these countries, if we can get giant clam farming and sea cucumber farming done on a commercial level. And make sure we get proportional returns to these countries that have a vested interest in maintaining this environment.”