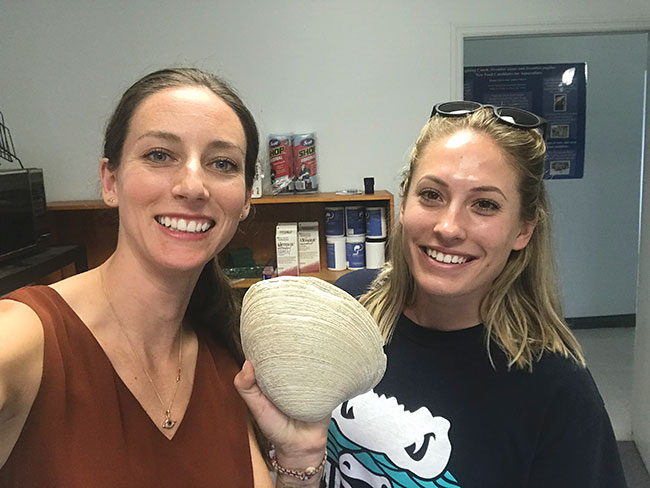 Thanks to a 1990s partnership with the state and Harbor Branch Oceanographic Institute (now HBOI-FAU) to retrain fishermen affected by a net ban, shellfish aquaculture in Florida has also become a way for fishermen to remain in their communities and use the skills they had learned in their previous occupation to farm clams. Because growers can plant seed year round, clams can be harvested continuously, allowing production to increase rapidly over the past 20 years.

Today, Florida has less than a dozen shellfish hatcheries and nurseries, ranging from small backyard operations to commercial-sized facilities that produce clams and oysters for farmers on both coasts for grow-out. Most hatcheries are small-scale operations, but some are taking greater steps to support local farmers, accelerate innovation, and maintain healthy and sustainable farming practices.

Seaventure
In October 2017, one such hatchery was established in Florida – Seaventure Clam Co., Ltd. The company has been selling shellfish seed to the northwest coast of Florida, near Cedar Key and Sebastian, since production began in 2018.

“Clam production in Florida has gone up significantly over the last several years,” said Victoria Parks, hatchery manager and co-founder of Seaventure. “We believe that there is still plenty of scope to learn and come up with new ways to improve aquaculture, not just our own methods and shellfish farming in general but also US aquaculture as a whole. We hope we can play a key role in this through our work.”

Broodstock collection
Seaventure selects its male and female broodstock from specific sites along the east and west coast of Florida to ensure high genetic diversity and that healthy populations are spawned. Those that show signs of resilience and survival in extreme natural events are chosen and logged so their specific traits can be tracked. The broodstock are then maintained in climate-controlled temperatures and fed a well-rounded diet throughout the day and night. All stock is kept at around 28 parts per thousand, with bi-daily tank cleaning and water changes. A tank rotation schedule is also adhered to, so that fouling and health can be maintained.

“Depending on their size, we keep about 300 to 400 clams in each tank,” said Parks. “After about two or three months of conditioning, the broodstock are taken to a specialized spawning table. Sometimes conditioning takes a month, and at other times it’s four months. No matter how you look at it, we are still at the mercy of Mother Nature’s will to some degree. You learn to take advantage of that when you can.”

Seed voluming by Richard Baptiste for growth monitoring . All photos by: Carolina Panoff

Spawning and larviculture
Spawns are induced through traditional thermo shock and by manipulation of water temperatures. This allows the hatchery to maintain, and yet drastically change, temperatures on the table at the spawners’ discretion. The process usually begins with males, followed by females. Females are then isolated for individual egg capture before being fertilized by hand using an optimal genetic blend of sperm. Once eggs have been hatched, water in the tanks is conditioned prior to egg introduction. Eggs are stocked at optimal densities and closely monitored for the first 36 hours to check for survivability and growth.

“Typically, we see a shift from egg to trocohophore to veliger in 24 to 36 hours,” said Parks. “But on a small scale, each individual develops at its own pace.” The veliger stage lasts for approximately seven days, during which a special algae blend appropriate for the clams’ age range is offered twice a day.

Water at the hatchery comes from an underground salt well and goes through a sanitation process where it’s de-gassed, bio-filtered, UV-filtered, sand-filtered, charcoal-filtered and run through a variety of bag or cartridge filters that range from .45 to 5 micron. It’s then sterilized and polished through a UV sterilization unit.

Despite having the capacity to hold 250 million larvae, the hatchery never pushes its densities to the max. This is to ensure that optimum performance is kept throughout. When they’re around seven days old, the larvae undergo metamorphosis, which allows them to settle and grow into their large and more easily recognizable counterparts. This takes another seven days.

The hatchery then hooks the clams to a drip feed-out system in raceways that contain a series of down-wellers with both recirculation and flow-through options. A special diet blend tailored to their specific life phase is given.

Biosecurity is also strict – the number of personnel in the clean algae culture room and small culture room is limited, and despite being trained on all tasks, personnel are assigned daily areas in order to avoid contamination.

“We pride ourselves on our consistent seed supply, and we’ve been able to achieve this by establishing protocols that ensure excellent health and survival rates and focusing on biosecurity and quality assurance,” said Parks.

Projects
With aquaculture taking place amidst rising awareness and even public concern over food production, safety, quality and environmental sustainability, Seaventure is working on various projects to communicate the clam farming process, its benefits and tackle environmental issues.

One of these projects is the production of resilient genetic lines that will thrive under less than ideal current and predicted environmental conditions, such as high summer temperatures, low pH and low dissolved oxygen. This helps to optimize the yield farmers can produce and allow aquaculture and ecosystems to thrive. Another is the study of alternative diets that could increase growth and survival in the hatchery and nursery; while a large-scale restoration project will also begin to remove algal blooms in coastal waters, bring life back to Florida waterways and educate surrounding communities on the importance of their role in the ecosystem. Volunteers will receive hands-on education in the field and share information.

In the meantime, Seaventure’s specialty line of clam chowder soup is due to launch in November, spreading awareness of the benefits of shellfish consumption.

“Our environment is changing, resulting in negative impacts on the planet’s ecology,” said Parks. “By acknowledging this, we can proactively search for solutions to protect our jobs, ecosystems and food. Educating the public on shellfish aquaculture as a sustainable method of food production, and its role in habitat restoration is an important component of our business plan.

“Restoration of native clams and oysters to their historic levels is good for the environment and for the industry as a source of genetic diversity of stock. Improved water quality equates to improved quality of life for residents and a draw for tourists. Expansion of both will create economic opportunities for many coastal communities.”

Social media – through its Instagram account @seaventureclamco and hashtag #farmingthefuture – has also been instrumental for the company in spreading its message and helping people learn more about sustainability in shellfish farming.

Related
Profile: Oyster expert finds his niche
Reef restoration
The world is their oyster
Future outlook: An examination of how hatcheries will evolve over the next 20 years