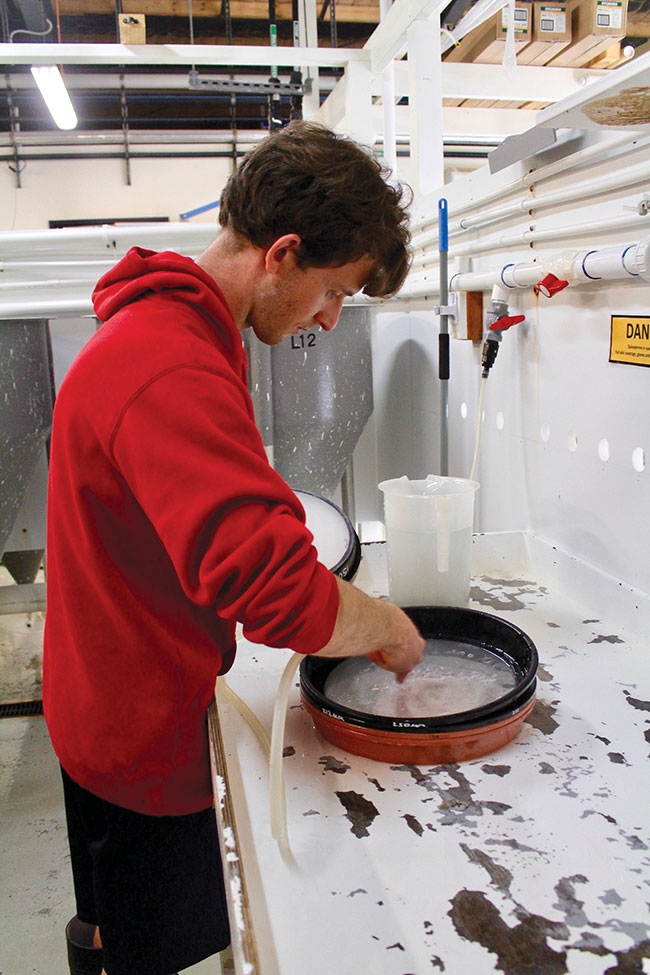 Native flat oysters (Ostrea angasi) have never been a popular table shellfish amongst Australia’s European settlers. Once plentiful and a major part of Indigenous cuisine around Melbourne’s Port Phillip Bay, as well as an important water filtering component of the ecology, their burning for limestone in the early days of the colony, the more recent scallop dredging, and the invasion of the Northern Pacific seastar – have seen their numbers hugely depleted.

The Nature Conservancy’s (TNC) recent global survey – Shellfish Reefs at Risk – concluded that filter feeding bi-valve reefs are the most endangered marine habitats on the planet, and in many areas are functionally extinct, particularly in North America, Europe and Australia. About 85 percent of oyster reefs in the world have been completely lost.

Dr. Boze Hancock, TNC’s marine restoration scientist, pointed out their importance to the ecology. “Oysters can filter up to four to five litres an hour; enough to fill a bathtub a day.”

With a major natural filtering system drastically depleted, water quality becomes a major issue, both for farmers and the environment in general.

Fisheries Victoria, along with TNC’s Australian team, have undertaken a project to restore the flat oyster reefs of Port Phillip Bay. The bay is surrounded by the City of Melbourne and its suburbs, and covers a surface area of 1,930 km2.

The Victorian Shellfish Hatchery (VSH), a grower-owned facility based in Queenscliff, has been tapped to produce the spat, and three sites have been chosen as pilots for the project. Local anglers have volunteered historic and current data to track the decline and, hopefully, the resurgence of these crucial elements of a healthy marine ecosystem. VHS shareholders are also trialling them. Should they prove to be a commercially viable prospect, it will help underwrite the cost of production of their mussel spat.

Collection
Broodstock are selected from a batch held on an aquaculture lease on the eastern side of Port Phillip Bay. Angasi fertilize internally – the females hold the ejaculated sperm inside the shell and fertilize the eggs, which are incubated on the gill filaments. Each female can produce up to two million eggs.

Once hatched, the larvae feed on algae pumped through by the parent oyster before being released into the water column at around eight days old when they are greater than 150 micrometer (µm) in size. After this they are pelagic, drifting and feeding on their own for around two weeks while in search of a suitable settling site.

Spawning readiness is monitored by observing water temperatures. The angasi fatten over winter and as soon as bay temperatures start to climb in September, they take steps to ensure the team they are going to use is brought to the Queenscliff hatchery.

Water temperature ranges in Port Phillip Bay have become problematic. With a surface area of nearly 2,000 km2, an average depth of eight meters and a narrow opening to Bass Strait, temperatures can range from 10°C to as high as 27°C at the top end of The Bay. Queenscliff is at The Heads and draws oceanic water that remains relatively stable with summer peaks of around 17°C to 18°C – a huge advantage, as it’s cheaper to heat water, if required, than to cool it.  The pH is similarly stable at 8.05.

Another advantage has been smart phone cameras. Growers can open a sample batch of potential broodstock, photograph their condition and send the image to Queenscliff for a decision on whether to use them or wait a bit longer, rather than make the long journey to the other side of The Bay for an appraisal.

The selected breeders are taken to the hatchery and suspended in 5,000-liter spawning tanks, where water temperatures are matched to their open holding circumstances: usually around 15°C. Once they’ve settled in, the temperatures are raised to 18°C over a week.

Some broodstock are usually already holding larvae when they arrive and will start releasing young within days. The majority will spawn on site and start to release after a week or so. The adults are held onsite for around 30 days before going back out to sea and being replaced by a new fresh team of animals.

The hatchery will then move the larvae into a downwelling system where they are exposed to a powdered scallop shell medium for them to attach to. After a few days, they are graded across a 250µm screen and taken to the outside grow-on upwelling tanks (undersized spat and vacant scallop grind are removed during this operation).

While free-swimming angasi are relatively slow growing, they develop quickly once settled. Within four weeks they’ll have reached a millimetre (mm), at which stage they’ll be sent to the farms where they are held on the screens in sheltered cages or with an upwelling system driven by petrol motors or paddlewheels. After only a few months, they are ready to be moved to longlines, where they’ll be held at depths of 10 to 15 meters until they reach a market size of 90 to 100 mm. Hatchery to harvest generally takes around 18 months.

Nursery
The spat used for the reef restoration program are taken from Queenscliff at 500µm.  They’re taken to the jetty in aerated bulker bags, loaded onto barges, and divers seed the contents across the designated area.

Nursery techniques vary, depending on the resources available. The idea is to get the spat up to 40 mm. Growers in the warmer bay waters, using cages suspended from pontoons, would expect spat stocked in December to be 40 mm by February. They are then glued by machine to 30-mm-wide seatbelt webbing at eight per metre. It takes another 12 to 15 months to get them to market size.

Another option being explored is at an on-shore flowthrough nursery where they’re grown to 5 to 10 mm before being stocked in subtidal cylindrical cages until they’re 40 mm when they’re graded and re-caged. The cages are suspended horizontally and stocking density is below 30 percent.

Hatchery help
Of course, the protocols used didn’t spring up overnight. Mic Shipley, hatchery manager for the Victorian Shellfish Hatchery, said they’d been fine tuning them over a number of years.  Bonamia is ubiquitous, but as Shipley pointed out, “Many of these oysters will be carrying Bonamia exitosa cells at sub-clinical levels, but If we keep everything super-hygienic and the animals well fed and happy, we can prevent it from ever expressing itself.”

On the leases, the farmers make sure the animals are stress-free by keeping them at depth below the surface turbulence or in well-sheltered situations, and at low stocking densities.

At this stage, the hatchery is concentrating on numbers: producing big, clean, healthy looking animals, as Shipley put it. “We have several broodstock sets we switch around each season. To further complicate things, they have this trick whereby the can decide to spawn or grow; they can’t do both,” he explains. “In some batches, we may only have 10 percent of the oysters to go off. Even though, if we had the funding, we have the knowledge to set up a family-based selection program. However, that element of their nature could make it a frustrating task. There’s quite a deal of natural attrition during the rearing process, and grading takes off the slower growers, so you’d have to say there’s already a selection process of sorts underway.”

The hatchery works to get 25 percent of the larvae through to spat. “With the angasi, we will put down 500 mixed gender broodstock and, on average, collect 30 million D-larvae. We’d expect to get 5 to 10 million spat from that,” Shipley says.

Like any hatchery, at VSH, algae production and hygiene – predominantly, screen and tank cleaning – is a daily routine. Dietary requirements for Ostrea angasi are still being established. Feeding rates vary through the growth cycle, but they are fed a rich diet of Tisochrysis lutea, Pavlova lutheri, Chaetoceros muelleri, and varying amounts of Chaetoceros calcitrans and Tetraselmis seucia.

The hatchery sector has always been regarded as highly intensive part of aquaculture, and a highly stressful area in which to work. It is one of the bookends of the industry. While the time of the fish’s life spent in the hatchery is short, the quality and the reliability of the outcomes has a huge influence downstream.

The Victorian Shellfish Hatchery, with its flat oyster breeding program, is making a valuable contribution to the reef restoration project that is designed to re-establish the vast angasi beds of pre-European settlement, while providing Victorian marine farmers with another marketing option.

Author’s note: Since the writing of this profile, Mic Shipley has moved on and Kim Weston, is the new manager at VSH. For more information, contact Kim Weston at vsh.manager@gmail.com.