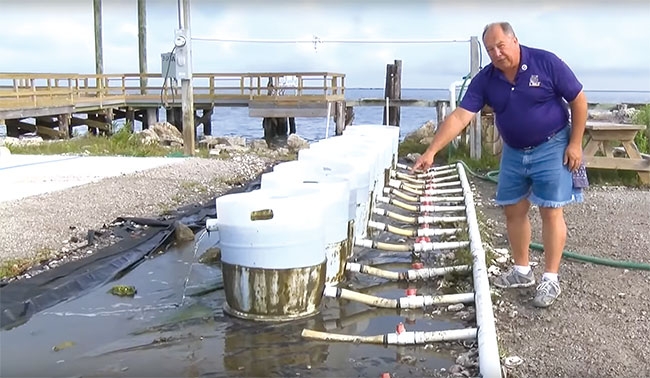 As the director of LSU's Louisiana Sea Grant Oyster Hatchery in Grand Isle Dr. John Supan is a picture of relaxation on a frenzied day

Dr. John Supan is a picture of relaxation on a frenzied day at Aquaculture America in New Orleans in March. “I’m not presenting nor judging student presentations, so I have plenty of time to visit with you,” he emailed back in response to Hatchery International’s request days earlier.

Wearing shorts and a light-colored button-down shirt, he smiles warmly and extends his hand in greeting as we meet for the first time on that crisp Lousiana morning.

Supan is clearly enjoying his retirement. Up until the end of 2017, he was a research professor at Louisiana State University (LSU) and the director of LSU’s Louisiana Sea Grant Oyster Hatchery in Grand Isle – just two of the many hats he wore as an oyster specialist.

“It’s been said that managing a hatchery is like having a mistress because it takes a lot of time away from your family,” he quips. “There were many a decade when I woke up alone down in Grand Isle. All that time I was only home on weekends, or the kids would come visit me for the summer when they were still school age and my wife Karen would come visit us on weekends. We had a very difficult time of keeping a cohesive family because I was gone so much. Now, my favorite part of retirement is waking up in the morning and my wife is laying next to me.”

After 30-plus years of giving lectures, managing the oyster hatchery, and training growers the techniques to produce oyster seed from larvae, retirement would have been an opportunity for Supan to make a fresh start at possibly something unrelated to his academic career.

But Supan didn’t, and perhaps couldn’t, walk away from the world of oysters. Since 2018, he’s taken over the management of Navy Cove Oyster Co LLC in Ft. Morgan, Alabama, which he co-owns with fellow LSU retired professor Dr. Charles Wilson.

“Chuck was getting really busy. He is the chief scientific officer for the Gulf of Mexico Alliance, which was created post-BP oil spill to address all the science generated by the oil spill. He’s nearing the end of that career but the next year-and-a-half or two, he’s going to be really busy wrapping up that program.”

Boutique farm
Supan describes Navy Cove as a “for-profit research farm,” where collaborative research occurs with Auburn University and LSU. “We provide space for universities to deploy graduate research there and if there’s any type of a weekly activity that needs to be done, like flipping cages for drying, we do that for them because we, as retired researchers, are big on collaboration,” he says.

The farm grows Eastern oyster (Crassostrea virginica) triploids, which was the focus of Supan’s research during his tenure as director of the Sea Grant hatchery. The triploid oyster was invented and patented in 1993 by Professor Standish Allen and Ximing Guo, both researchers at Rutgers University in New Jersey at that time. Because it has three sets of chromosomes (instead of just two that wild oysters have) a triploid is sterile, so it does not put energy into summer spawning. The result is an oyster that grows faster and fatter, even throughout the summer months when wild oysters are usually thin.

Supan helped bring these specialty oysters to Louisiana through a NOAA-funded program he spearheaded. He taught hundreds of people about hatchery operations, site and gear selection and oyster farm management – work that helped expand the range of oysters farmed in Gulf Coast states. He has passed the torch to the new generation through the graduate students he mentored, which is the part of his career that he misses the most, he says. “I was very good at helping students become what they want to become. Sometimes they had no idea or sometimes they had very strong ideas on what they wanted to become. But I’ve gotten somewhat of a reputation of cranking out hatchery managers.”

0Asked if that was a good or a bad thing, he chuckles: “That’s very good! And I always had this deal with my grad students: I will help you become what you want to become, but for the rest of my life, I get to crash your house. We all get to become very close friends. Some have gotten jobs in exotic locations. So when I do go visit them, I get a free place to stay like, recently, in Hawaii and Cape Cod.”

Today, he continues that work through his newly formed company, Sea Farms Consulting LLC and Navy Cove’s collaboration with universities. “I formed this LLC a year ago when I formally retired from LSU when I can give it more time. For 35 years prior to that, my job at Sea Grant was to teach people. I’m still a teacher. I’m just not getting paid to teach anymore.”

As a commercial enterprise, Navy Cove is a boutique oyster farm that produces a limited number of oysters. “In the first two years, Chuck and I had permits to put in 10 cages in the water and we ate all of our harvest. We were just having fun. Then we decided they’re pretty good oysters, let’s get serious about it. So we started really commercializing our efforts about five years ago.” It has been eight years since that very first harvest.

The farm currently sits on an acre and has 80 cages. It sold 120,000 pieces to the half-shell market last year. “The harvest goes to select restaurants in New Orleans, Houston and Alabama. About one-fourth goes to Sassy Bass Island Grill in Gulf Shores, Alabama, which is a very popular place among what we call ‘snowbirds,’ people from up North escaping the winter. They love our oysters. Eric Bradley (who joined the partnership in 2016) knows a lot of the restaurateurs in Gulf Shores so we’re slowly starting to have our oyster show up in these restaurants.”

It appears everything has come full circle for Supan. While he helped drive triploid production across the Gulf, Navy Cove also buys triploid post-set of seed from commercial hatcheries. Those hatcheries make triploid oysters out of sperm from the Sea Grant program in Grand Isle that Supan led for over 30 years. “I have established an oyster nursery on a pier in Navy Cove where we grow our seed up to roughly six millimeters before we deploy them in the farm,” he says. “At Navy Cove, my partners and I were just mimicking everything I’ve taught everyone else.”

Given the partners’ expertise, Navy Cove could have gone into the nursery business itself. In fact, Supan says it used to be in it heavily at first. “But the partners couldn’t give it the focus it needed,” he explains. “The reality was I live two-and-a-half-hours away from the farm, my other two partners live nearby, but they’re busy with their businesses and jobs. So now what we do is we focus on buying 200,000 post-set in the spring and 200,000 post-set in the fall. We’re able to stagger those and work them through the farm. When we get those oysters to retain on a 14-millimeter screen to go into a 12-millimeter grow-out bag and when we know we have 100,000 of those for each crop (spring and fall crop), any surplus we sell.”

“That’s an advantage to us because by then they’re rather large, they’re 14 to 15 millimeters in size. We can easily get $100 per thousand for those seeds. So we sell surplus seed, but we first guarantee that our farm has its own oysters.”

Niche market
As a grower of market-size oysters Supan believes “Navy Cove will get to a point where we’re at the right size, which is 150 cages, producing anywhere from 200,000 to 400,000 oysters at 50 cents apiece” – and make some money.

“We have shown that you can get two crops through your farm six months at a time in one year and actually pay all your bills, pay your insurance, get your seed in the water for next year and replace a portion of your old cages. Throw out some of your old rotten cages and replace them with some new ones like, 15 in a year, which is a line of cages. By the time you pay all your bills and got seed in the water for next year, you’re going to net $30,000.”

“But the problem is a lot of distributors who are willing to distribute those oysters don’t want to go that high a price. So that’s going to be one of the limiting factors – it’s distribution at that price. So a lot of the small farms have decided to distribute their own oysters. They purchase all the necessary licenses from their individual states to become wholesale distributors themselves, where they will wash their own oysters, box them up, have a refrigerated truck and drop them off to individual restaurants.”

At white-linen-tablecloth restaurants those oysters are sold from $3.00 – $3.50 apiece, he says.

“But we don’t want to be in the trucking business,” he says. “We’re more than happy to have a distributor, a valuable member of our team – Bon Secour Fisheries – they’re a 30-minute drive away. We deliver our oysters in moss-covered culture bags to Bon Secour Fisheries and they wash them, they box them, and they ship them out to their various customers under the brand name of Navy Cove.”

Supan and his partners are more than happy for Navy Cove to remain a small operation. “We expect to double production this year, but our goal is to eventually have 400,000 oysters on the farm at any given time. We do not want to be in volume business. We prefer that niche market, to remain a boutique oyster farm, and stay at the right size for three guys who have other things to do besides farming oysters.” Like perhaps visiting former students, and now friends, working as hatchery managers in exotic places.