Private entrepreneur Alexander Petrov is currently completing a hatchery within his fish farm in Kurgan Oblast, Russia. This is the first facility of its kind in this part of the country, and as soon as it is launched it would dramatically reduce the import-dependence of the region in stocking material. 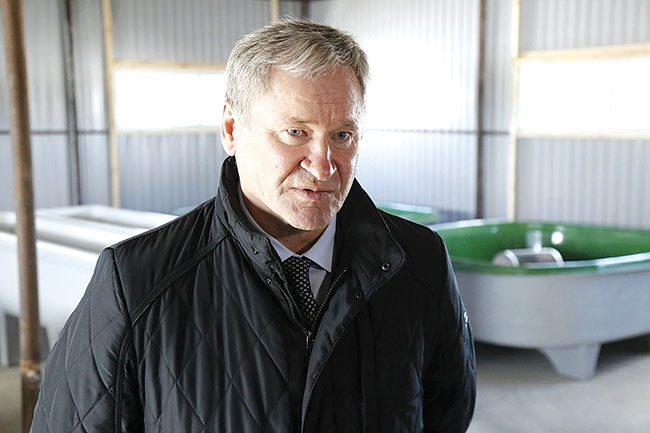 According to Petrov, he has been working in the fish business since the1980s. To establish a full-cycled fish farm that would have no need to purchase feed or stocking material “was his lifetime dream.” Now, after many years of work the dream may finally come true, aided to some extent by the state policy imposed by Russia aimed at giving a strong impetus for the development of the domestic aquaculture industry.

Social importance
The green light to the project was officially given in 2015, when both the regional and the federal government issued a subsidy to Petrov for a total amount of Rub8.5 million ($150,000), which allowed him to expand his business by building packaging capacities and the hatchery. This was about 10 per cent of the total cost of the project.

The new hatchery would initially release whitefish fry. The project will be expanded to include sturgeon and salmon fry, according to Petrov. The hatchery has a strong social importance for the region, where the aquaculture industry is still in infancy, according to Alexey Kokorin, the governor of the Kurgan Oblast.

“Previously, we had to purchase fry for reproduction purposes in the neighbor regions. Now, by launching this facility we could start breeding our own fry. This, in turn, would allow us to significantly increase the volumes of fish production in Kurgan Oblast,” Kokorin said.

The new business is also expected to help alleviate the unemployment problem in several villages nearby, according to Kokorin.

First steps
According to Petrov, he purchased the stocking material for the hatchery in Novosibirsk Oblast in April 2018. This year the company plans to achieve 10 per cent occupancy of its hatchery. The hatchery is expected to be in full production by 2019.

At the moment, the fish farm operates five ponds in the Kurgan Oblast, where it is authorized to commercially breed fish. On average, the company needs 2.5 million units of fish fry in order to stock each of the ponds.

So far, the fish farm was producing from 10 to 12 tonnes of commercial fish per year. This figure is expected to increase, as Petrov plans to keep developing his business. The new hatchery would release “millions units of fish fry,” although the exact numbers are yet to be specified. Speaking about the equipment, Petrov said that, “it is most modern, it meets the best world’s standards, and what is especially important is that it is of the Russian-origin.”

In addition, the fish farm plans to make operational a packaging factory early next year. This would solve “the problem of resellers who used to buy fish and sell it at a four times higher price.” By packaging its own products, Petrov plans to make direct sales to St. Petersburg and several other big cities in Russia.

Future plans
The company would initially breed fish fry for its internal needs, with plans to supply other customers in the future, including outside the Kurgan Oblast. The aquaculture industry in Russia is rapidly developing, and according to the federal government’s forecast it would double in size in the coming decade.

Currently, there are very few hatcheries operating in Russia. Previously, the fish farmers in Kurgan Oblast had to purchase stocking material either in Novosibirsk or in St. Petersburg, the cities located 1,300 km and 2,600 km away from the Kurgan Oblast, respectively. That was a big problem because of the high logistical costs, according to Petrov, and since some of the fish could not survive such a long journey.