The demand for broodstock is on the rise in Crimea in light of efforts by Russian authorities to develop the local aquaculture industry and to mitigate the negative impact on the environment resulting from the construction of the Crimean Bridge. 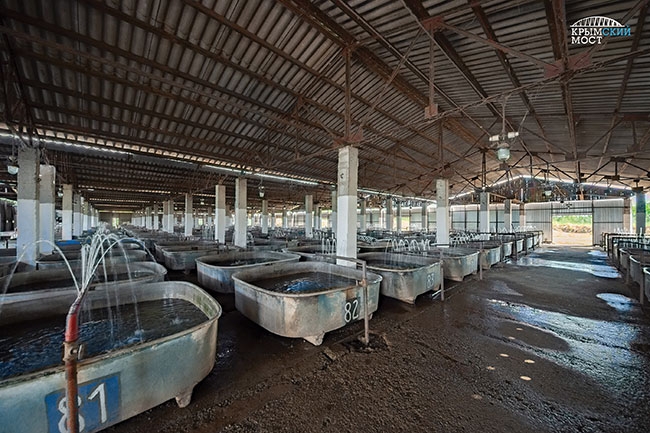 Several hatcheries work in Crimea to produce fish fry for local needs. The demand for broodstock is on the rise in Crimea

The aquaculture industry in Crimea is experiencing a real investment boom, with production volume increasing from 800 tonnes in 2016 to 1,799 tonnes in 2017. There are dozens of new aquaculture projects on the pipeline, according to a statement published in the Russian Gazette, the official publication of the Russian government.

In 2017, local authorities granted Rub30 million (US$500,000) to reimburse part of the investment costs on new projects, as well as to subsidize the cost of acquiring broodstock for the local aquaculture producers.

The development of fisheries and aquaculture are among the top priorities in the economic growth policy for Sevastopol, the capital of Crimea, said Natalia Goncharuyk, chairman of the agricultural department of the Sevastopol government. Currently, local farms are importing most of the broodstock from the Russian southern regions – Krasnodar Krai and Stavropol Krai.

Aquaculture challenges
In total, there are 30 aquaculture farms in Crimea, and 60 percent of all production is European carp (Cyprinus carpio), silver carp (Hypophthalmichthys) and Chinese carp (Ctenopharyngodon idella). The lack of fresh water is the biggest challenge for the local aquaculture industry.

After the Russian annexation of Crimea during the 2014 Crimean crisis, Ukrainian authorities cut the volume of water flowing into Crimea through the North Crimean canal, citing a huge outstanding debt on water supplies owed by the peninsula. The North Crimean canal was the main source of fresh water supply for Crimea and the region has been experiencing shortage of fresh water in the past few years.

Despite the problem, some foreign investors are considering some fish farming projects in Crimea. A big project, in particular is currently under consideration by a Chinese company, according to Sergey Aksenov, the head of the Crimean government. So far, no additional information about this company or the project has been provided.

Over the past four years, non-Russian companies were refraining from investing in Crimea because the peninsula has been subjected to international sanctions by the U.S. and the European Union, which includes prohibitions to conduct any business on the territory.

Crimean Bridge issue
The additional demand for broodstock in Crimea is also associated with the implementation of the Crimean Bridge’s ecological program. Under the program, 500,000 Russian sturgeon (Acipenser gueldenstaedti) fingerlings were released into the local waters in 2018, and 500,000 more are slated to be released in 2019. There is a possibility that this program could be expanded in the future.

Ukraine environmentalists have been repeatedly claiming that the recently constructed Crimean Bridge, which is spanning the peninsula with mainland Russia, negatively affects the population of some fish species in the Kerch Strait and Azov Sea – although no research in this regard has been made so far. Russian authorities argue that the sound barrier installed across the bridge protects fish from sound impact.

The Crimean Bridge ecological program is needed to restore the population of the Russian sturgeon that was affected by poaching, authorities said.