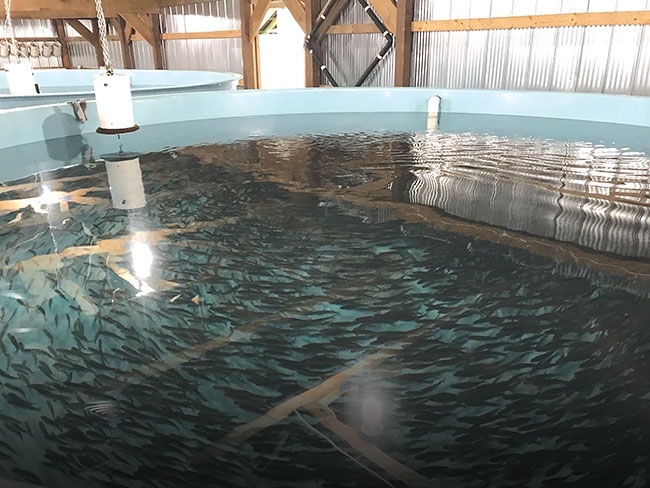 The oxygen delivery system is a critical part of an entire hatchery operation. Understanding its mechanisms should be an essential part of employee training.

Despite its critical nature, very few people who work at a hatchery understand the oxygen delivery system and how it works.

Setting oxygen at the tanks, operating air stones and probes – that is often as far as knowledge goes. Delivery, oxygen generation, solenoids and even where the lines run, are often unknown to many hatchery employees.

System setup – redundancy
The best advice that can be given about any oxygen system is: It will fail. Thus, the most important consideration after you have properly oversized the system is redundancy – usually, two levels of redundancy.

Bottles and backup bottles, an extra oxygen generator and compressor with backup bottles – whatever the backup choice should be specific to the farm but easy to use in an emergency. There must be redundancy of smaller essential parts as well – air stones, solenoids, airline, fittings – any piece critical for operation, no matter how small or large, must all be on hand or easily attainable.

Depending on your location, parts for equipment – compressors, oxygen generators, and others – need to be kept on hand as well. Expect that each piece of the system will fail so parts needed for repair must be readily available.

The oxygen pressure represents the lifeline to the fish. Problems and failures with the oxygen generators or compressors can have immediate effect. With this equipment, oxygen is constantly being produced to keep up with the demand on the system, as opposed to having a large reserve that is gradually drawn down like in an oxygen tower.

Because the generators are largely on demand, there is a risk of overdrawing the system. Overdrawing the generators can have disastrous effects on the hatchery. Once the level of consumption exceeds the ability to generate oxygen, pressure in the oxygen tank starts to drop. Low pressure means low oxygen purity for the fish. At the ground level this can lead to even more problems. For example, the technician sees that the tank saturations are low and turns up oxygen to compensate, causing the pressure to drop even further. Blown lines or large leaks can cause the same issue, and easily make the case for alarming the system pressure.

The oxygen delivery system is a critical part of an entire hatchery operation. Understanding its mechanisms should be an essential part of employee training.

Oxygen pressure monitoring, maintenance
Regular monitoring and maintenance are essential. Start of day and end of day checks should always include checking the oxygen pressure. It is important for employees to understand that the changes in pressure have meaning and indicate something has changed, and that their actions on the ground – manipulating the O2 in the tanks – effect the oxygen system as a whole.

Drops in pressure indicate greater consumption; this can indicate normal increases in use or indicate blown hoses and leaks. If there is a sudden pressure drop, there is a reason for it and it needs to be investigated right away. Oxygen pressure should be monitored and have an alarm system. It’s not enough to just have an alarm, the alarm itself must be tested at regular intervals. Hoses, lines and fittings should be inspected at regular intervals; solenoids should be tested routinely to ensure they are working.

Proper monitoring and recognition of problems are key to managing an oxygen system. Major problems can be avoided by expecting everything to fail and preparing accordingly.