The return of cod (Gadus morhua) farming to Norway is based on a number of factors but is anchored by the continued efforts of the National Cod Breeding Program, Atle Mortensen, senior scientist at The Norwegian Institute of Food, Fisheries and Aquaculture Research (Nofima), explains during his presentation at Aqua Europe 2018 held in August in Montpellier, France. 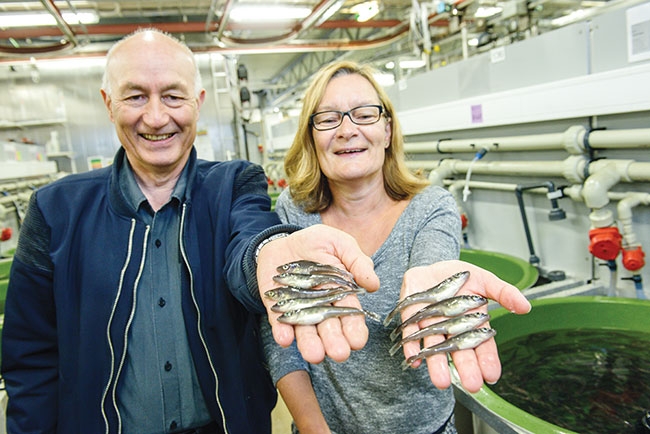 Fluctuations in wild cod populations led to the development of cod farming to support a land-based processing industry. Around the year 2000, wild catch quotas were low and as a result, the market price for both wild caught and farmed cod was high, explains Mortensen.

“Growers became interested and between 2002 and 2008, farmed cod production increased more than 60 percent a year.” In 2008, there were 20 commercial hatcheries and 533 cage farming licenses, but it was not to last. By 2014, the industry had completely disappeared from Norway.

A number of factors contributed to the collapse, Mortensen says. “We had difficulties across all growth stages. Juvenile quality was low and this led to poor growth rates and high mortalities. Cage growth was slow with early maturation causing variations in size, and we had a high number of deformities.” The slow growth led to slaughtering during top landing season for wild cod, which reduced the prices.

Lack of knowledge in cod culture led to outbreaks of Vibriosis, Atypical Furunculosis and Francisellosis (vaccines are available now, but not for the latter). Those early cod stocks also liked to wiggle out of their net pens, and escapes were high.

During the financial crisis of 2008, banks became impatient with their loans, Mortensen says. “Growers were forced to slaughter fish that were not ready for market in order to raise cash,” he says. Prices were lower because the wild catch quota had been raised and there were more cod on the market.

“This new industry simply could not survive,” says Mortensen.

Hope for cod
The National Cod Breeding program housed at the Center for Marine Aquaculture in Kvaloya, near Tromoso Norway, kept ticking along however, with some positive results. Researchers continued with the selective breeding program of classical family selection based on 200 families that began in 2002.

“The goal is to select for faster growth, disease resistance and later maturation,” says Mortensen.

“We saw our growth rates improve nine to ten percent per generation, for an average of about three percent a year,” says Mortensen. “This new breed of fish grows about 30 percent faster and reaches a slaughter weight of over four kilos in about 30 months.”

“Early maturation in males was previously around 95 percent and we have it down to five percent now,” Mortensen adds.

“We also learned a lot about production protocols for juveniles,” Mortensen says. The team worked with brood fish feeding, collection and control of egg batches, production of both live feed and formulated feed, and general husbandry procedures.

“When we started the breeding program for cod it was discussed if it was possible at all to have 100 percent survival for cod due to its reproductive strategy,” explains Oyvind Hansen, a scientist with Nofima.

Cod produce lots of eggs but invest relatively little in each egg he says. “We have been able to focus on egg quality,” says Hansen. “Using blastomere morphology as an indicator allows us to identify and discard low-quality egg batches early on.”

Improved broodfish diets have led to an increase in both egg production and larval survival and larval feeding refinements have helped as well, says Hansen.

Cage-friendly
The new domesticated cod stocks are more amenable to cage culture. More than 50 percent losses in sea cages were reported between 2005 to 2009, says Hansen.

“Survival in sea cages has improved,” he says. The mortality from transfer to sea until harvesting at 22 months is now approximately only 16 percent, he adds.

Through selective breeding, the fish has become adapted to farming says Hansen. “The cod have an increased tolerance to handling which is needed in a farm situation,” he says. “Farmed cod do not ‘attack’ the nets (when in cages) anymore and they seem to have lost their eagerness to escape.”

The farmed cod in tanks now slowly swim in circles as well, according the Hansen, an improvement from the initial phase. “When we started with wild cod, they would sometimes show stress signs such as jumping out of tanks.”

Grow-out feed has not been a focus in research, Hansen says, but “a lot of improvements should be possible.”

“They are behaving more like farmed salmon. They like the cage and the three meals a day.”

Renewed interest
A 100,000-tonne reduction in the Norwegian wild catch quota is planned for next year, from 800,000 to 700,000 tonnes, and this is expected to lead to stronger prices.

Interest in farming is returning, says Mortensen. “I get a phone call almost every day now asking about cod farming.”

Hatchery capacity is limited at this time. “There is one hatchery left in the south of Norway, but it is now mostly focusing on producing Ballan wrasse cleaner fish,” says Hansen. “In the north of Norway, we are the only supplier of juveniles.”

Grow-out capacity in both regions is lacking as well, says Hansen. “There are now three small-scale cage farms testing our fourth generation of selected cod,” he says. “The feedback from the farmers so far is very positive.”

“The future production is not set but it is wise to increase the production step by step,” cautions Hansen. “Both markets and production biology should be thoroughly documented before upscaling of production is done.”