While ‘Río Pescado’ is the oldest freshwater site belonging to Cermaq Chile (see Hatchery International, Volume 18 Issue 4), ‘Santa Juana’ is one of the company’s newest salmon RAS in the country. 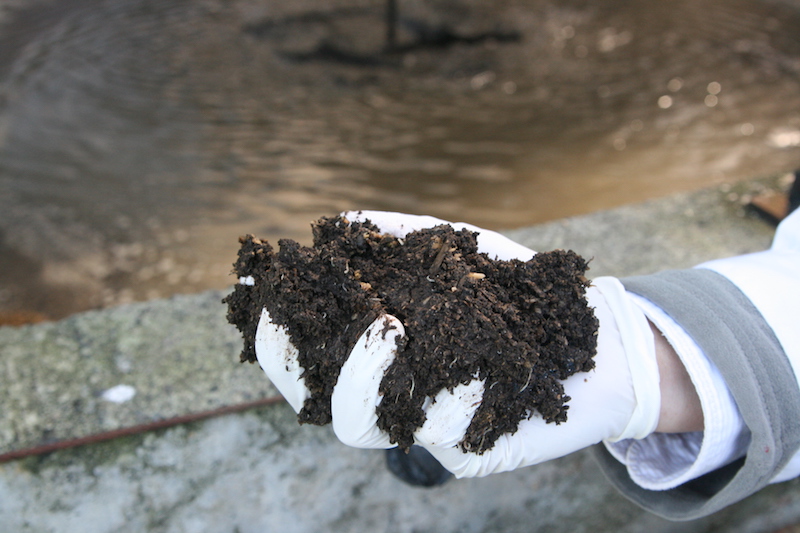 Launched in 2007, this farm formerly belonged to Salmones Humboldt and is located in Cancura, near the river ‘Rahue’, about 100km north of Puerto Montt. Twenty-seven people work in this RAS.

The facility is part of Cermaq since Mitsubishi Corp purchased both Salmones Humboldt and the Cermaq Group in the past decade and merged them in December 2016. ‘Santa Juana’ is currently slated to produce Atlantic salmon smolts.

On its premises this smolt farm has 10 Comphatch hatching units; thirty 8m3 tanks for hatched-fry and first feeding; fifteen 30m3 tanks for juveniles; and twenty 250m3 tanks for smolts.

All those units combined require about 40 liters of new water per second, which means that 98% of the total is recirculated. Meanwhile, the water intake comes from two wells located within the 5ha site (~12 acres), which are independent from the river ‘Rahue’.

The RAS was provided by Billund of Denmark. In the treatment system, after water leaves the fish tank, it passes through Hydrotech drum filters, submerged biofilters, degassing (trickling) units, oxygenation cones (downflow bubble contactor) and a UV filter, before finally returning to the tanks.

Feed is supplied using Arvo-Tec’s feeding system for each tank, while O2 and temperature are monitored using Billund technology.

‘Santa Juana’ has a maximum production capacity of six million smolts per year in four batches. It receives eyed-eggs from other Cermaq Chile hatcheries in the region.

There is sorting and removal of fish with deformities and runts at first feeding. Then there is grading when fish reach 1.5g and one or even two additional gradings before 15g.

The fish are ready for transfer to seawater at 150g.

According to several producer and supplier companies, this is reportedly a good productive performing salmon RAS, so we asked the farm manager of the facility, Jorge Vega, to describe the secret of his success. He explained that there are three key elements: production program, preventive maintenance and human resources.

“We need a good production program, which manages the maximum potential of the farm and schedules the fish inputs and outputs; a proper design and a good preventive maintenance program, so that there are no major flaws; and a group of experienced professionals and operators, who constitute the greatest value of this fish farm”, he said.

Given that there are no specific regulations for RAS residues in the country most sludge from freshwater sites ends up at landfill sites authorized under current legislation.

Despite the absence of regulations, Cermaq Chile collects all waste accumulated on the filters at ‘Santa Juana’ and moves them to a worm composting area which has been in operation since 2009. There the sludge is transformed into fertilizer.

Jorge Vega said that all solids produced by this salmon RAS are removed by backwash through the mechanical filters, collected and sent to a treatment plant that uses a biofilter of worms (so called ‘Tohá System’ developed by PhD José Tohá Castelló in the ‘90s).

“Currently, “Our production is used in the gardens of our facility and to create green areas in another freshwater site.”

Solids produced in the system are extracted by the mechanical filters and sent by a backwash system to a pond. There, these solids are pumped into a homogenizing pond, where particle size is reduced using air, making a rough solution more or less homogeneous. Once this process is completed, water is pumped into the Tohá system.

This treatment system is divided into several sections: First, pumps distribute the solution on the surface of the worm biofilter by means of sprinklers. This process is performed several times a day automatically, depending on the presence of solids in the water. The Tohá system consists of a large concrete structure like a swimming pool, with a geotextile tissue and a layer of sawdust in top which fills all the interspaces. This is the habitat of worms, although there are nitrifying bacteria and other populations too, allowing the digestion of solids from the farm and converting them into soil.

The resulting product has no chemicals or binders. Water that falls on the surface percolates to the bottom while solids remain trapped between the layers of sawdust. Then, water flows into a settling pond, to retain remaining sawdust and probably some worms in the system. The water removed from the system more than meets the Chilean environmental standards.

“Once every year the material retained is collected and distributed to the gardens and used in the creation of new green areas in our facilities. This process is tremendously important since this facility was designed to reduce impacts on receiving water bodies and to be an environmentally friendly fish farm,” said facility manager Jorge Vega.