News & Views
Developing a standardized protocol for larval-rearing of pikeperch

A protocol for larval-rearing of pikeperch, which identifies an optimal combination of factors, has been developed to give best growth, survival and development of larvae over the nursery period.

“Progressively, the rearing protocol for pikeperch larval rearing was improved, and an optimal combination of factors was determined. It allows the production of 5,000 juveniles (1.0-1.4 g, 50 dph) per 700-liter tank with swim bladder inflation rate of 90-95%,” cited Pascal Fontaine et al in Improvement of rearing conditions for juvenile pikeperch (Sander lucioperca) production in RAS.

A global and multifactorial approach sets it apart from previous studies conducted on the topic.

“Our objective is clearly to identify an optimal combination of factors and to propose a reliable protocol for fish farmers. It is very much an applied research. We consider the larval rearing tank as a complex system. Our research considers the whole larval-period of seven weeks. We are not focused on a specific event, such as first feeding, weaning or growth after weaning.

“We would like to identify a global combination of environmental, feeding and population factors that will produce a maximum of juveniles well-developed in terms of higher growth, survival and swim bladder rates. We use a pilot-scale 10 m3-RAS, very close to those met on farm conditions,” Fontaine told Hatchery International.

Fontaine is director of the Research Unit Animal and Functionality of Animal Products, University of Lorraine – INRA in France. The project received funding from the European Union’s Seventh Framework Program for research, technological development and demonstration.

Some of the major bottlenecks in larval-rearing have been identified ashigh mortality due to cannibalism;high occurrence of skeletal deformities; andlarge size heterogeneity between larval cohorts at various ontogenic development stages.

For each trial, pikeperch larvae were distributed in eight 700-liter tanks from an indoor water-recirculating system.

Four environmental factors were tested in the first experiment. These were light intensity; water renewal rate; water current direction in the tank; and cleaning done at two different periods of time.

The study recommended an application of “a light intensity of 50 lx, a water renewal rate of 100%, cleaning of the tank during the afternoon and an inlet of water at the bottom level.”

“We need to reduce production costs and develop a breeding program,” Fontaine said. 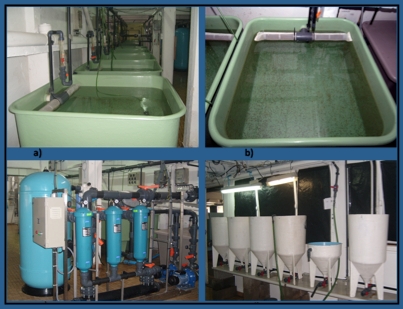 Related
In RAS, off-flavour is off-putting
Mowi buys lumpfish farm in Scotland
From hobby to hatchery
Peracetic acid use in RAS: Findings from research at The Conservation Fund’s Freshwater Institute