Scientists with Florida’s Mote Marine Laboratory recently launched a study into how to breed and farm Almaco jack (Seriola rivoliana), a fish that may be a rising candidate for aquaculture production in the Gulf of Mexico. 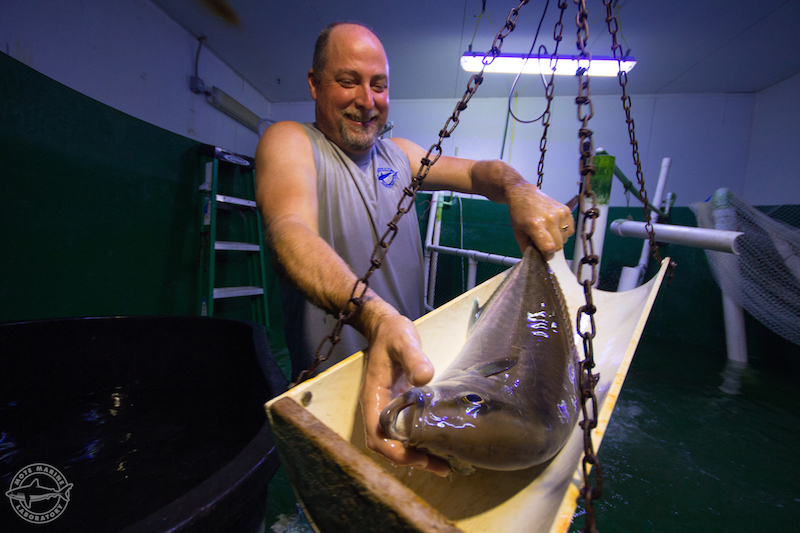 The project, which is being funded by the NOAA’s Sea Grant Aquaculture Research Program, is targeted at creating hatchery technology to support the development and expansion of offshore aquaculture in the Gulf.

Dr. Kevan Main, senior scientist and program manager of Mote’s Aquaculture Research Park, said the Almaco jack or Bar jack, as it’s alternately called in the Gulf, has world-wide distribution and is known in some parts by a variety of other names, such as the Kona kampachi, Hawaiian yellowtail, Longfin Yellowtail, and Almaco amberjack.

Although aquaculturally attractive for various reasons, there are also challenges to culturing the Almaco jack, says Main.

“The main bottlenecks associated with commercial production of Almaco jack include susceptibility to parasitic and bacterial pathogens, and an inconsistent supply of juveniles resulting from poor spawn quality and low hatchery survival,” she said.

“Our research is focusing on improving captive maturation, spawning, health management and larval rearing for this species. Our goal is to build on previous research and commercial efforts and develop hatchery techniques for Almaco jack in the Gulf of Mexico.”

Main said that scientists from Mote collected stock from the Gulf last spring using an offshore recreational fishing boat. The Almaco jacks were found around 90 miles offshore from St. Petersburg at depths ranging from 55 to 67 metres.

And Main said there’s clearly much to learn about producing Gulf Almaco jack juveniles in hatchery and nursery facilities.

She said the Gulf strain appears to be much easier to spawn than other marine fishes, where it is often necessary to induce spawning with hormonal implants.

At Mote, she said, the stock began spawning spontaneously two weeks after completion of the quarantine period.

“We hadn’t planned to do our first sampling of the broodstock until September, but much to our surprise, the broodstock began spawning,” Main said, adding that by the time of the interview both broodstock populations had been spawning for the past three weeks.

The goal of the project is to provide essential knowledge for the aquaculture industry to help it produce healthy rapid-growing juveniles in land-based facilities, for supply to offshore growout cages in the Gulf.

It’s hoped by industry that it will allow as many as 20 aquaculture operations to be permitted and put into operation offshore in the Gulf over the coming 10 years.