“When I first started growing oysters in Willapa Bay in 1979, we could put out shells and collect seed,” recalls Dave Nisbet, owner of Goose Point Oyster Company. “That’s the way I built up my business.” 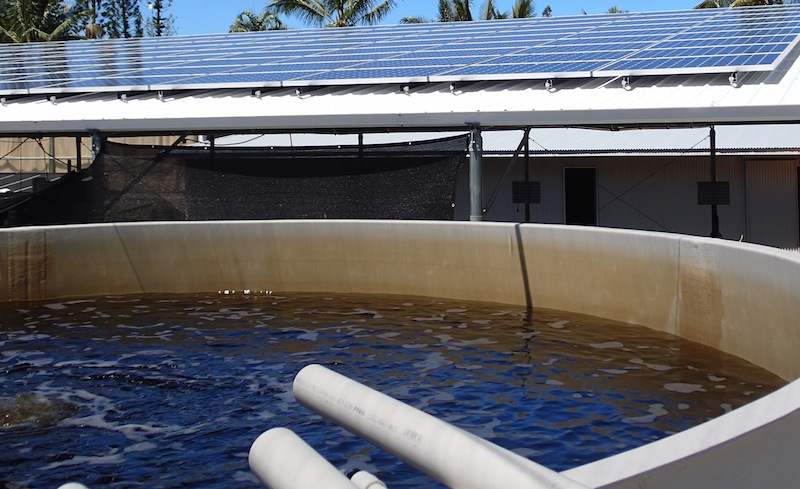 When ocean acidification clobbered seed production at shellfish hatcheries on the west coast of North America a Washington-based oyster producer discovered a solution in the Hawaiian Islands.

“Over the years we moved into using hatchery seed in order have a more stable supply and we began to notice that the natural sets were declining,” Nisbet says.

In the mid 2000’s larval oysters began dying in hatcheries along the US west coast. It was determined that low ph was the cause of larval death in the first 10-15 days after hatch. Ocean upwelling brings up lower ph water.

“In the spring and summer when the northwest winds blow, they drive nutrient-rich water off the bottom onto the continental shelf,” Nisbet explains. “Just when the hatcheries are getting cranked up in the spring this acidified water is coming into their water sources.”

“By 2009 we were totally dependent on Whiskey Creek (an independent hatchery in Oregon), for seed as our natural set had vanished.” Nisbet says. “And then it hit the wall.” Whiskey Creek, and Washington-based Coast Seafoods and Taylor fish farms, were suffering loses of more than 60%. “The integrated companies weren’t going to sell to outside customers,” says Nisbet. “That put pressure on Whiskey Creek. We could see that our seed supply was going to dry up here.”

Key to the motherload

Goose Point Oyster company started working with Maria Haws from the University of Hawaii at the Pacific Aquaculture and Coastal Resources Center (PACRC) facility on the Big Island and they discovered a key to the motherload of sorts.

“PACRC has a saltwater well,” Nisbet says. “That appealed to me because it was contained; it wasn’t a flow-up from the ocean.”

“We were able to figure out hatchery and algae protocols over two years,” says Nisbet. “We got a bit of seed that was setting okay, so we decided to purchase an acre of land, drill our own salt and freshwater wells, build a hatchery and get our feet wet.”

Hawaiian Shellfish LLC is just outside of Hilo at a site approximately a quarter mile inland. “I wouldn’t recommend drilling a salt water well to anyone,” says Nisbet. “It was a lot of work.” But it is the key to their operation.

The island’s lava rock acts as a natural filter for the water, which comes in at a salinity of 33-34 ppt and 22°C year-round. The advantage of the saltwater aquifer that they have tapped is that the water has a constant water chemistry that’s perfect for growing shells on oyster larvae. The chemistry of the aquifer is likely to remain steady for years to come, regardless of changes to the surrounding ocean. “We like what we’ve got,” says Nesbit.

It’s also a bio secure source. “We don’t have any disease issues,” says Senior Biologist and VP Brian Kingzett. “We follow the same biosecurity approach as a salmon smolt or shrimp hatchery and we really work on it.”

They began with a 7,600 square foot building that was operational in 2011. “We bring the gigas broodstock in from Willapa Bay rich in glycogen and ripen them in Hawaii,” Kingzett explains. “It’s a more expensive approach, but it works for us right now. We do have the ability to hold broodstock in winter conditions and recycle them in Hawaii and we expect in the future we will do that.”

The larvae are reared in 5000 gallon tanks on continuous flow. Algae is raised in a bag system, in a greenhouse, that uses only natural light. Seed is grown in a bottle nursery to a range of sizes. Setting larvae is shipped back to the mainland to supply the company’s own 2000 acres of farm. “Single seed is settled in Hawaii and at 3-4mm, after about 6-8 weeks, they are ready to be shipped to farms in Alaska, Washington, Oregon and California, for growout,” says Kingzett.

That initial build was expanded to a footprint of about 30,000 square feet. “We are set to increase our output by 40%,” says Nisbet. “We expect to be able to ship to more growers over 2017/18. We are just getting the bugs out now.”

The company has a breeding program and works closely with Dr. Chris Langdon and the Oregon State University Molluscan Broodstock Program. “I believe in genetics and performance for Pacific oysters, says Nisbet.

On-going ocean monitoring now helps west coast hatcheries predict OA events and avoid in-take of overly acidic water. That practice has contributed to restoring survival rates. “We’ve been told that this acidification off our coast is increasing,” says Nisbet. “The next question is how much an escalation in acidification is going to affect oysters as you move up later stages of development?”

“We wonder if metamorphose and set-on-shell will create issues in the future. I don’t think this is mission accomplished, lets move on,” Nisbet warns.

“The hatchery is designed to be very energy efficient,” says Provan Crump, Hawaiian Shellfish LLC Hatchery Manager. “We don’t do a lot of heating; we don’t use artificial light for our algae.”

“We grow a little slower and really focus on increasing larval health as opposed to getting things through really quickly,” says Crump. “We are constantly striving to make a higher quality oyster.”

“The operation is run entirely on solar using 5000 sq feet of solar panels on the roofs,” Crump explains. “We just finished an 18 month project bringing in 3-phase power and solar.” Crump adds that they have a 32kw and 64kw propane generator for back up.

“We think as a result of all the design and engineering approaches that we take, we are probably one of the, if not the most, energy efficient hatcheries in the world.” Crump adds.