The survival rate of walleye larvae in RAS increases when micro-diffusers and oil absorbent socks are used, according to a study by Laramée et al, Development of techniques to promote gas bladder inflation of walleye (Sander vitreus) larvae in intensive recirculating aquaculture system. 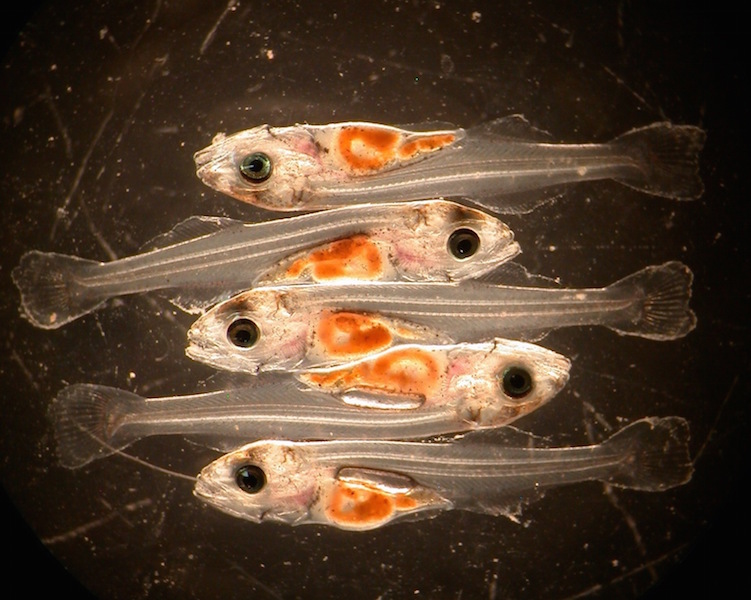 Asked how these treatments could be combined to produce better results, Benjamin Laramée told Hatchery International, “The combination of these treatments may ensure optimal gas bladder inflation because it acts on different elements in the tank. The oil absorbent sock allows removal of an oil layer that prevent larvae catching air bubbles on the surface of the water.”

“The micro-diffuser, meanwhile, allows larvae that do not go to the surface to catch an air bubble in the bottom or middle of the water column. Furthermore, upwelling movement from the center, which is induced by upwards bubbles, can contribute to evacuate oil towards the tank wall, then to the absorbent sock considering the circular flow,” he said.

Laramée presented the study at Aquaculture Europe 2016 held last fall in Edinburgh. He has a masters studying Intensive Walleye Culture in RAS from the Université Laval and is currently working on his PhD in aquaponics, also at the same institution.

The non-inflation of gas bladders in walleye in RAS has been identified as a deterrent in raising this species.

The study noted that while this and other problems have been “broadly solved” using specific tank culture techniques, gas bladder inflation problems continue to be an issue in RAS.

Being physoclistous, walleye’s gas bladder and digestive tract are only temporarily connected to each other during the first few day’s post-hatch.

“To inflate the gas bladder, physoclistous fish have only a short window of time to catch an air bubble at the surface of the water. If the surface water is contaminated by bacteria or fungi, the gas bladder’s duct may be infected which, in turn, affects its inflation,” he said.

Being negatively phototactic is another critical trait. “A too high light intensity may keep larvae away from the surface.”

The study tested four treatments for their potential to promote GBI of walleye larvae:

• An in-tank micro-diffuser to provide air bubbles for larvae under the surface, combined with a low outflow 90° surface water spray.

The experimental treatments did not affect water quality nor larvae growth. All water parameters were similar among treatments.