There’s a lot of research going into rearing bluefin tuna in European countries along the Mediterranean coast, and in Australia and Japan but now researchers in the U.S. state of Maryland are cranking up investigation into this highly valued species. 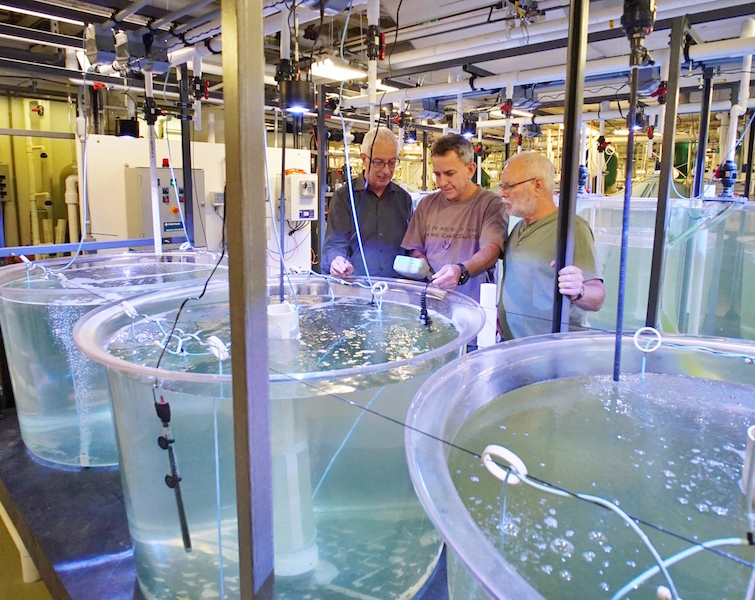 Located on Baltimore’s inner harbor on the Chesapeake Bay the University of Maryland Baltimore County’s Aquaculture Research Center (ARC) has been studying the bluefin tuna (BFT) life-cycle from egg, larvae and fingerling stage for a number of years while also researching similar life stages of European sea bream and sea bass.

Professor Yonathan Zohar is chair of the Department of Marine Biotechnology and head of the team at the marine recirculation aquaculture facility: “ARC is a totally contained, fully recirculating, bio-secure marine aquaculture operation. It is fully computer-controlled to allow a wide range of environmental conditions – salinity: 0-to-full seawater, temperature:12-28 degrees C and photoperiod control over individual tanks with simulating sunrise and sunset,” conditions, he explained.

Under Zohar’s design, the facility is also very simple in its approach to rearing marine fish and shellfish in a recirculating system.

“It is a generic facility that can accommodate any fish/shellfish species, tailoring the conditions to allow optimal performance,” he says. “We start with city water, run it through activated carbon filters and then make our artificial seawater fully simulating the composition of the marine environment.”

“Therefore, while biologically removing our waste, we generate bio-energy to offset some of the energy costs of the operation,” said Zohar. “ARC’s main objectives are to enable our scientists to carry out their aquaculture R&D program on their species of interest in optimal conditions as well as study in a prototype of a fully contained, zero discharge marine aquaculture operation.”

Zohar and his team of researchers, including John Stubblefield, faculty research assistant; Jorge Gomezjuardo, faculty research assistant; and Odi Zmora, research supervisor, start with bluefin tuna eggs from halfway around the globe and carefully rear them at the Institute of Marine and Environment Technology (IMET) in Baltimore. Their goal is to develop a sustainable way to farm the tuna in closed aquaculture systems, cultivating a healthy food source while also protecting wild bluefin tuna populations.

“We made major progress on our research towards closing the life-cycle of the Atlantic bluefin tuna,” he said. “A cross-Atlantic international collaboration between UMBC/IMET/ARC and the company Kali Tuna COO in Croatia, enabled us to achieve, for the first time ever in North America, the production of bluefin juveniles at ARC.”

Broodstock bluefin tuna, 220-260 kg each were held in floating net-pens in the Adriatic Sea (Kali Tuna COO) and were induced to spawn using hormone-based, controlled-release implants administered to the fish by free divers using spear-guns. Massive spawning started in early summer and lasted for two months. The fertilized eggs were collected inside the net-pens, packed and shipped to ARC, where they arrived 36 hours later as freshly hatched larvae that were stocked in experimental tanks operating on fully recirculating water systems.

“We conducted groundbreaking R&D in an effort to overcome the current major hurdle to the development of tuna aquaculture – rearing of newly hatched larvae to juvenile fish. Multiple combinations of live feeds and artificial diets were used and led to the successful production of the first weaned juveniles at the age of 40-50 days and 40-65 mm (~1.5-2.5 inches) long,” he explained. “This study marked the world’s first-ever production of juvenile bluefin tuna in a land-based, full- recirculation mariculture system and the first production of juvenile bluefin tuna in North America. It is also the first step towards the development of environmentally-sustainable aquaculture of this important species in the US.”

ARC also includes a sophisticated zebrafish operation that allows it to use this important model fish to address aquaculture-related (and biomedical too) questions.

Zohar also sees a future for his facility in the development of offshore net pen farming of marine species in the Gulf of Mexico and beyond in the U.S.

“In that respect, we are very interested in developing full-cycle bluefin tuna aquaculture in the Gulf of Mexico and beyond. I believe that we should establish land-based hatcheries of bluefin tuna, to include broodstock tanks enabling environmentally-manipulated year-round spawning, as well as larval rearing and nursery production to feed growout operations in offshore cages and on land,” he explained.

Dr. Yonathan “Yoni” Zohar has diversified his species beyond bluefin tuna. He explained that he has been working with European sea bass and bream because those fish are imported into the U.S. market, adding to the gargantuan seafood trade deficit that exists in the nation.

This summer his research team plans to continue their larval rearing and juvenile production work with Atlantic bluefin tuna. They also plan on the reproduction/molting and hatchery production of blue crabs as well as disease work with blue crabs, oysters and other commercially important finfish.

“There is an economic opportunity to grow these species locally, which is possible only in fully recirculating, bio-secure systems like ours,” he explained. “Sea bass and sea bream grown domestically in land-based systems will grow faster, reach the market sooner and fresher and with a reduced carbon footprint, and all together will be farmed in a more environmentally sustainable manner. Consequently we are trying to develop full-cycle aquaculture of these species in the US.”

ARC contains multiple tanks of 1, 2, 3 and 4 meters in diameter (ranging in volume from 1 to 20 cubic meters) specifically designed to maintain broodstock and conduct research with fish of various species and sizes. There are 32 smaller tanks of 350 liters each for carrying out experiments with multiple groups of fish, as well as a complete hatchery area equipped with larval-rearing systems and facilities for culture of a wide range of food chain organisms for larval diets.

A computerized system maintains full control over the photoperiod, water, temperature, salinity, oxygen and water chemistry in each of the ARC tanks, and water quality and operational parameters are constantly monitored. All environmental parameters can be modified to meet the requirements of specific culture conditions and experiments.

It’s also a prototype for an urban mariculture operation which can be scaled up for commercial applications. A separate 50- square-meter algal production laboratory is tailored for the study and culture of marine micro-algae. This room, equipped with multiple banks of lights for growing vertical (hanging) 100-liter bags of algae, allows a daily production capacity of over 4000 liters of microalgae.