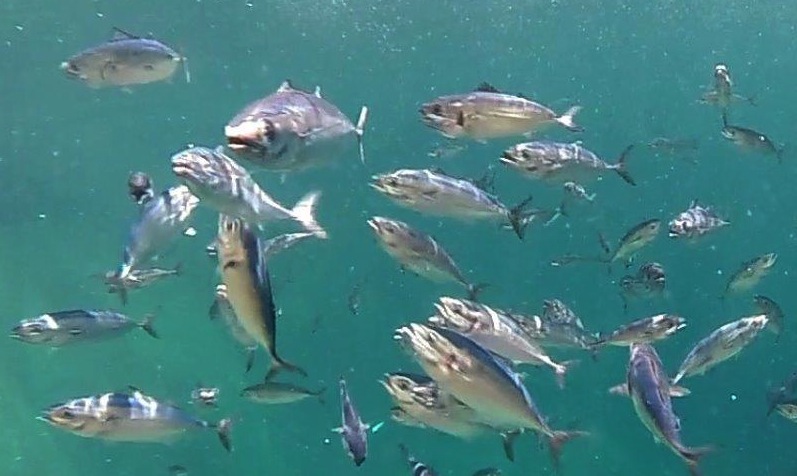 The culture of bluefin tuna (BFT) has become an increasingly important objective in Mediterranean aquaculture. Till now most BFT culture has been done not through traditional aquaculture methods but through fattening in ocean pens. To this end wild BFT are harvested in the Mediterranean by seine net and transferred to offshore cages where they are fed with frozen fish (i.e. sardine, pilchard, and squid) for a few months before sale, primarily to Japan where it is used in sushi and surimi.

For tuna fattening there are production limits which are defined by ICCAT (The International Commission for the Conservation of Atlantic Tunas). ICCAT follows scientific recommendations and sets an annual quota at 13,400 metric tons for bluefin tuna fisheries in the East Atlantic and Mediterranean. Turkey’s country quota was about 1000 metric ton in 2003 and 550 metric tons in 2014.

These limits to production have pushed researchers and private businesses to reproduce bluefin tuna in a hatchery setting. Indeed, various European researchers have been working on hatchery production of bluefin tuna for a number of years but most have faced significant challenges that have been difficult to overcome.

One Turkish company that is now putting considerable effort into developing a cultured tuna industry is Kiliç Aquaculture. And one of the key individuals involved in the project is Serkan Ilgaz, Director of Hatcheries for Kiliç.

After receiving permission from Ministry of Food, Agriculture and Livestock, aquaculture experts at the company began to gather information and in 2014 they produced about 14000 bluefin tuna fry. Another 27,000 were produced this year.

Eggs spawned by the tuna were transferred to a hatchery in Bafa town, one of four hatcheries run by Kiliç Aquaculture where production has been carried out using 15 metric ton gilthead seabream larvae tanks.

After hatching, prelarvae were fed by rotifer and then Artemia. They were kept till they were 7-8 cm long in an adaptation unit and fed by live food intensively. This took 40-45 days after hatching.

The most significant problems were the bluefin’s fast growing rate and accompanying need for live food. Cannibalism has also been a significant challenge.

“Experts have been working on the feeding regime,” said Ilgaz. After adaptation was completed, the BFT fry were transferred to a 16 m diameter cage which has 8 mm mesh size. BFT fry in the cage have been fed with chopped mackerel and other fresh fish. Average weight of last year’s production is now around 8-10 kg said Ilgaz.

Kiliç Aquaculture is the largest integrated fish farming company in Turkey. It was founded in 1991 on the Bodrum Peninsula, southwest Turkey, and grown considerably since that time.

The company has four hatcheries and production reached 350 million fry in 2015. The company also has a fish feed plant and a fish processing plant for 40 thousand tons of fish production per year, primarily European sea bass and sea bream but also meagre and dentex.

Türker Bodur, Ph.D. is with Akdeniz University, Department of Aquaculture, Antalya –Turkey. After six years industrial experience, he has been working at the university, specializing in selective breeding programs and fish nutrition.