Mysis diluviana, a non-native species, was introduced into Okanagan Lake in British Columbia during the early 1960s in hopes that it would help support a dwindling Kokanee (landlocked sockeye salmon) sport fishery. 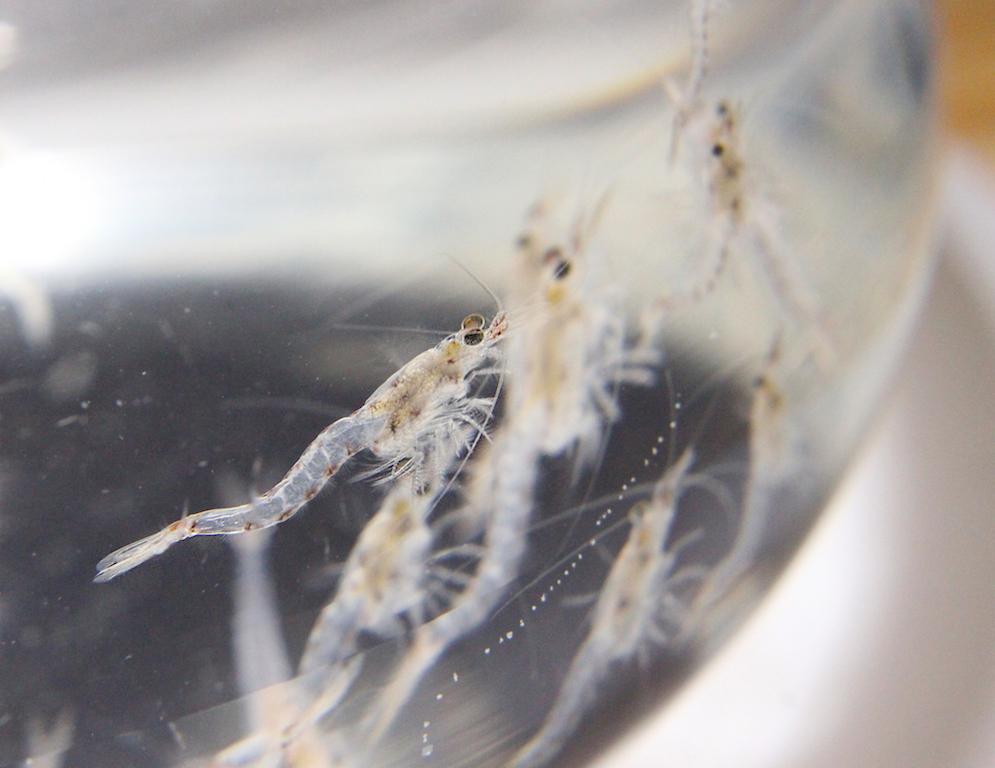 “The plan worked in a number of small shallow lakes in the province where the Kokanee were able to catch the Mysis for food, but that didn’t translate into Okanagan lake,” explains Piscine Energetics (PE) president Nuri Fisher.

Okanagan lake is 350-400 feet deep and the shrimp hide out in the depths during the day, well below the Kokanee feeding zone.  At night the shrimp rise to the surface to feed on zooplankton and phytoplankton.  Kokanee don’t feed at night, so they can’t take advantage of the Mysis as a food source and to make matters worse, the shrimp are eating the same plankton that would support the Kokanee fry.

“The spawning population was around a million adults,” says Fisher. “But after they introduced the Mysis, it more or less crashed completely, the Kokanee were starving.”

The BC Ministry of the Environment developed a lake rehabilitation plan in the late 1990s aimed at restoring the Kokanee, that included a test fishery on the shrimp.

“The original owner of the company started by sewing his wife’s panty hose together, attaching them to a hoop and dragging it behind a tin boat,” chuckles Fisher.

With an average yearly biomass ranging from 1500 to 3500 metric tonnes, the shrimp have been declared a problematic and invasive species in the lake.  Piscine Energetics has been working with the Ministry of Environment to achieve an annual removal of 50% of the total Mysis biomass.  They currently have three commercial fish boats that work the lake at night, from spring through fall.

“We have patented a drag net harvesting system and a by-catch excluder apparatus that only targets the Mysis,” explains Fisher.  “There are no mortalities of kokanee.”

The business was built selling flash-frozen shrimp to the aquarium market and Fisher, who has a background in the aquarium industry, continued to expand that when he bought the business 10 years ago.

“We sell our product around the world,” says Fisher.  “The shrimp are harvested while they are actively feeding, so their guts are full of the plankton and flash freezing right at the dock preserves the taste and the high levels of protein, (60-70% dry analysis) Omega’s 3&6 and fatty acids.”

The careful harvest process keeps the shrimp whole.  “A fish can see hey, this looks like a shrimp,” quips Fisher. “That’s part of the success, fish are naturally attracted to it.”

Fresh frozen is their biggest seller, but they have also developed a pellet, which utilizes a low temperature manufacturing process.  They aren’t heated above 100’F says Fisher, so they keep their nutrition and the fresh taste. They have developed a variety of sizes down to a micro feed of one or two mills. “Now we are going down to a couple of hundred micron size to support a variety of species,” he adds.

Aquarium owners like the PEMysis products for their palatability.  “Cuttlefish, for example, are known to be difficult to grow in an aquarium,” Fisher points out. “But they really respond to the Mysis. Fresh is best.”

But it’s the way that aquarium researchers have used Mysis to support seahorse spawning that Fisher sees as an example of how the shrimp might have a place in the commercial hatchery industry.

“Captive bred sea horses have a notoriously low fecundity rate, somewhere around 300 to 400 eggs,” Fisher explains.  “But when the hatchery-based broodstock are conditioned with Mysis, the enriched diet helps them produce 1200 to 1500 eggs.”

He sees supporting aquaculture broodstock, particularly wild broodstock which are not familiar with a diet of commercial fish food, as a first step at increasing fish production.  “A healthy broodstock leads to higher fecundity rates and healthier eggs,” Fisher points out.  “You may be able to have less broodstock and those healthy eggs have a high hatch rate, so already you have improved your business.”

Fisher also sees the Mysis being useful in larval diets.  “The shrimp are so laden with plankton that they are a super food,” he says.  “Its like they are transferring the plankton directly to the larval fish.”

“We get lots of stories from people using our shrimp,” Fisher adds.   “There’s an aquarium in Tennessee that is culturing a CITIES listed fish that they will restock and they want to use only natural feed to support the re-introduction process.”

“We expect that the Mysis may help improve larval survival rates in species that are harder to culture,” Fisher notes.  “We want to be able to help people when they are hitting these roadblocks.”

“All Mysis are not created the same,” Fisher says. “Those that are raised overseas in ponds do not have the same nutrient profile as ours that are caught while feeding”

“When we sent our shrimp to the lab they were amazed at the profile,” says Fisher.  “This non native environment of the warm surface water for food and the deep cool water for resting helps grow a super shrimp.”

“The high fat and Omega acid profiles of the shrimp provide an enriched diet, including natural astaxanthin, that may balance more plant-based diets,” he says.  “That could allow for increased production within a facilities footprint.”  There could also be a place for PEMysis in finishing fish raised in closed containment systems, particularly on a lower fishmeal diet.

“We are looking for someone to pick this up and help us with research and development to leverage our success in the ornamental market into commercial aquaculture,” says CEO Murray Bye.  “This product is sustainably harvested, its helping to control an invasive species and fish like it.  I think that’s a win win for everybody.”