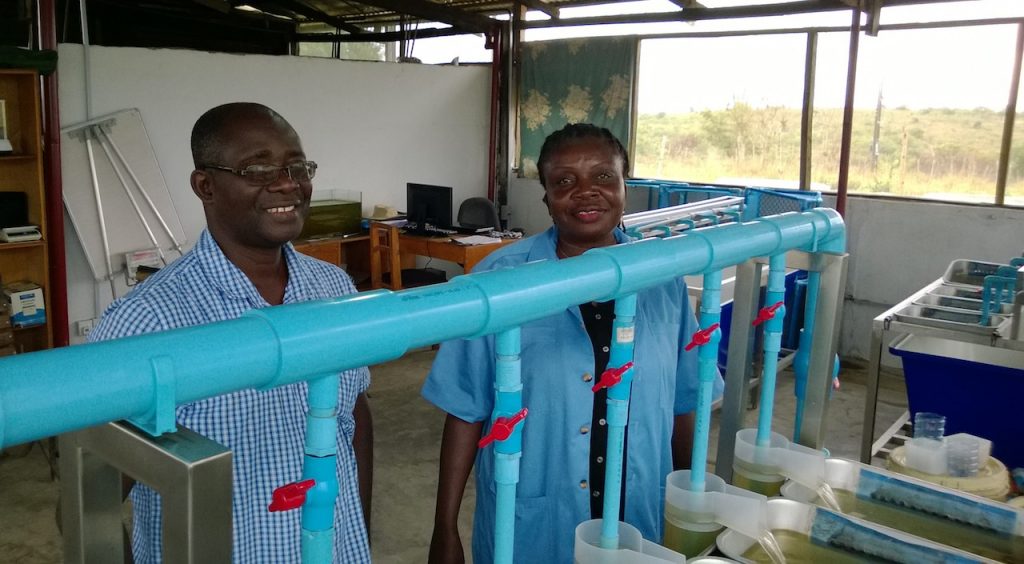 Ainoo-Ansah Farms Julian Hynes reports on how a ballooning seafood deficit is leading to the development of new fish hatcheries and a rapidly expanding aquaculture sector in this small West African country.

Ghana, a small West African country with a population approaching 26 million, is a lower middle income country ($1,026 – $4,035 GNI/cap.) with a fast-growing economy exporting cocoa, gold and in recent years, oil.

Fish consumption, estimated at 26 kg/year, comprises around 60% of animal protein intake. Marine and inland fisheries account for approximately 7% of GDP and employ 10% of the population. The total annual fish requirement of 968,000mt is met by fish harvests totalling 455,697mt, leaving a deficit of over half a million tonnes. Fish imports in 2012 were 175,341mt. Exports mostly of high value tuna were 46,234mt. Fish is thus vital to Ghana’s food security.

The potential for aquaculture to address the deficit in fish supplies has been recognised for decades. Ghana is blessed with native stocks of Nile tilapia, uncontaminated by introductions of stocks from elsewhere and there are no introduced species.

The government has implemented legislation, policies and support programmes to encourage the growth of fish farming and in 2013 established a ministry of fisheries and aquaculture development. Aquaculture production in 2012 was reported to be 27,450mt, a twenty-fold increase in five years. Over 80% of production is locally selected Volta stocks of Oreochromis niloticus, the remainder being mostly the African catfish or mudfish, Clarias gariepinus.

Tilapia production is predominately all-males raised in cages in the 8,500 sq.km Volta Lake formed from the Akosombo hydroelectric dam built in the 1960s. The fish are reared in locally made 125 cu. m cages, raising 10,000 fish to 300-400g in five months.

International fish feed companies are marketing to the growing industry and in 2012 the first fish feed mill in West Africa was established at Prampram east of the capital, Accra, by Raanan Fish Feed West Africa (www.raananfishfeed-wa.com). It is now supplying fish feeds to Côte d’Ivoire, Togo, Benin and Nigeria as well as Ghana and boosted the potential for industry growth. There are also equipment suppliers, consultants and investment advisors typical of the initial stage of industrial development, with pioneering farms taking advantage of opportunities based on natural resources and technology.

Ainoo-Ansah Farms (www.ainooansahfarms.com) is one of the first fish hatcheries in Ghana to specialise in the production of high quality fingerlings. It was established in 2009 adjacent to a dam in the Central Region of Ghana near the coastal town of Winneba and is owned and operated by Jacob and Theresa Ainoo-Ansah (jainooansah@yahoo.com). The 200m Okyereko irrigation dam was designed for rice, vegetable and fish farming. Fish production began in 2010 but a serious lack of rainfall in the region in recent years has reduced the reservoir level by some 10m and precluded cage growout of fish.

In September 2013 the company completed installation of a new hatchery comprising a bank of incubators and a recirculation system. Water is pumped daily 200m from the reservoir using a 5HP petrol pump, to a height of around 25m. Recently installed electricity mains provide for electric pumps and there is a back-up generator. The water is delivered to overhead reservoir tanks where water flows through a simple sand filter before delivery to the units. Water temperature ranges from 30–32C in the afternoon.

The farm has its own broodstocks of Nile tilapia, Oreochromis niloticus from the Aquaculture Research & Development Centre of the Water Research Institute near the dam at Akosombo. The stocks are from the Volta Lake selected for improved growth over several generations. Broodstocks are maintained in six concrete brood tanks 5 x 10 m holding ~1,000 adult tilapia. The eggs, ranging from just-fertilised to four or five days, are harvested weekly by manual extraction. A good harvest is one kilogram of eggs from some 750 females.

A complete system consisting of ten incubation jars, associated piping, trays and stands was purchased from Farm Aqua, Thailand. The improved incubation conditions increased survival to swim-up from 25% to over 90%. Eggs are distributed by weight, 60g approximately 50,000 eggs per incubator. At swim-up the yolk sac fry are transferred to fry trays for 2-3 days until yolk absorption.

The fry are moved to the nursery consisting of 28 circular units, concrete rings 1.5m diameter 45cm deep (~1.5 cu.m). The recirculation system comprises a submersible Tsurumi ½ HP pump and 0.75kW ring blower providing vigorous aeration in a collection sump. It is run daily to flush the rings with freshly aerated water and flowing back to the sump which is fertilised with NPK or pig manure (bagged) to create green water.

Feeding begins immediately eight times per day with hormone-treated feed for sex reversal. The company uses Pre-Grower PG40 feed produced locally by Raanan Fish Feed West Africa.  Methyl testosterone sourced from Jinan Boss Chemical Industry Co. Ltd., China is applied at the hatchery. After 28 days the fry have reached 0.15 to 0.3 grams and are transferred to cages in the reservoir.

The cages are standard (for Ghana) steel-framed 5 x 5 x 5m with plastic barrel floats. Initially they were in 6m water depth, now reduced to 1m. After seven to eight weeks feeding in the cages the target size of 5 grams is achieved and the fingerlings are harvested by scooping with a grader, numbers estimated by weight, bagged with oxygen for shipping. Fingerling production is now approximately 300,000 per month.

The farm supplies all five southern regions of Ghana to areas remote from the Volta Lake where there are larger fingerling suppliers. Markets are found through fish farmers, pond diggers, feed companies and equipment suppliers. There is potential for expansion to supply new markets such as small pond producers if that sector develops, producing less expensive tilapia from more extensive, integrated farming systems.

There is need for stock certification of fingerlings for quality suppliers to market their products over inferior slower-growing stocks. The declining level of the reservoir is causing increased silt and turbidity but better quality water is assured using submersible pumps in deeper parts of the reservoir.

Tropo Farms Ltd. (www.tropofarms.com) is a vertically integrated tilapia farm in Ghana, established in 2000 owned and operated by Mark Amechi (mark@tropofarms.com). The first farm at Asutsuare has sixteen earth ponds totalling 10ha supplied with water from an irrigation project below the Kpong dam on the lower Volta River.

The company has expanded into one of the largest fish farms in Africa with cage production in the Volta Lake. It is planning a processing facility at the port city of Tema and, the subject of this article, developing a new large hatchery and offshore cage site. In 2012 production from the farm was 6,000 tonnes, around a quarter of the reported national total of farmed fish. The farm produces Nile tilapia, Oreochromis niloticus, from the Volta Lake selected for improved growth over several generations by the company.

The new hatchery is located on the shores of Volta Lake 25km north west of the Akosombo dam near Gyakiti in the Eastern Region. Construction began in 2013 and currently around a hundred staff work in production and site development. Under construction are 26 ponds, each 3,600 cu.m, with 1mm liners from Huitex Geosynthetics. The ponds are arranged in five levels and supplied from two lined reservoirs. Water is pumped from the lake at a depth of 8-10m, auto-regulated by level control wells and there is a back-up generator.

Water temperature is 27C in the morning, rising to 29C late afternoon. Each reservoir has a circulation propeller and fan and organic fertiliser is added at a standard rate to create green water for the ponds. Three sedimentation ponds and an ‘ox-bow’ canal will manage the effluent before discharge into lake.

Swim-up fry (~0.0085g) are transported in bags with oxygen 50km from the jar hatchery at Asutsuare and stocked in 40 sq. m fine mesh hapas, initially nursed for 21 days to ensure sex reversion and reaching a size of 0.2-0.3grams. The feed is Cargill Aquaexcel imported from Brazil. The small fingerlings are transferred into closed jumbo hapas with 20 strands per inch mesh netting supplied by Farm Aqua, Thailand.

There are six hapas per pond, each pond equipped with a 220-240V floating aerator from Pioneer TW. The fingerlings are fed four times per day until they are 25 grams and strong enough to transfer into cages in the lake. From swim-up to cage stocking takes around 10 to 12 weeks. Grading is carried out at the end of each nursery stage.

To reduce stress fingerling harvesting is carried out at 5.00am, when water temperatures are cooler, using manual transfer and weighing. Harvesting is directly into water tanks with 0.1mg/L salt on two trucks each with 60,000 fingerlings, driven to the shore and delivered into cages that are pulled out to anchor.

At the time of our visit there were six million fingerlings at the facility. Their destination was to marine-type cages moored offshore with housing on site. The cages are circular framed from Asakua Aquaculture, Turkey. At present a 19m catamaran carries the fingerlings in 12 tanks with aeration, taking 100kg/tank. Two new steel transport vessels are on site undergoing fitting out. Harvest can be at a minimum in four months, with a target size of 500 grams per fish. It is estimated that the farm will produce 30,000 tonnes per year within five years.

The farm is coping with concerns about deteriorating water quality in the Volta Lake with frequent monitoring. There are serious problems with intense theft of fish and, as with all investments in Ghana, the company must overcome terrible infrastructure and navigate Bank of Ghana foreign exchange controls.