Features Recirc
From hobby to hatchery

Aquaculture is relatively new in Mozambique, but the culture of freshwater species such as tilapia has existed for decades. High in protein value and palatability, tilapia are a key focus due to their high growth rate and ability to breed easily and naturally in captivity. 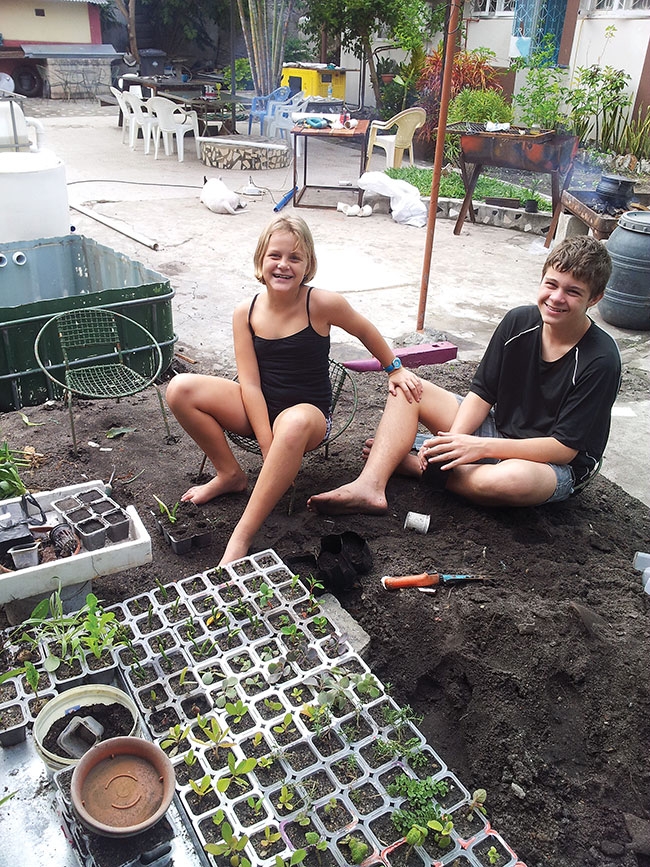 Kruger's children helping out at the aquaponics farm.

In addition to being tough, they eat a variety of food, survive in poor water conditions and tolerate a range of environmental factors. For countries such as Mozambique, tilapia farming can contribute significantly to socio-economic development by providing cheap protein and creating jobs.

Based in Mozambique’s third largest city of Beira, hatchery Moçambique Aquacultura e Agricultura (E.I.), or MAA, has been playing a pivotal role in rearing tilapia for many years. But for Alwyn Kruger, who runs the hatchery, his route into the industry was not exactly conventional.

“I’m the sole owner of MAA and started selling tilapia fingerlings toward the end of 2016,” he says. “But my story goes back much further. I’ve always enjoyed aquaponics, and thought it would be an ideal way to spend more time with my son. One day, we went fishing in the local rice fields with natural ponds that are home to Mozambican tilapia, and we caught 14 small fish. We placed them in an IBC (intermediate bulk container) tank and set up some aquaponics tanks. Within a year, the fish had multiplied and soon aquaponics farming was in full swing in our back garden.”

In 2015, Kruger’s property lease expired, forcing him to vacate his premises and move his aquaponics hobby, which by then had become a huge project. Seeing the move as an ideal chance to expand in bigger premises, he found a new location with a back garden and a borehole.

“By this stage, I was very intrigued by tilapia and did some comprehensive online research,” he said.  “As an experiment, I decided to start breeding my own fingerlings. Friends became interested in what I was doing, and encouraged me to apply for a government licence to breed fish on a residential property.”

After being formally registered with the local government, Moçambique Aquacultura e Agricultura (E.I.) obtained a government contract in 2017 to supply 571,000 tilapia fingerlings within the year. That contract was met, and the hatchery is currently busy with the 2018 contract, which was awarded for an additional 500,000 fingerlings.

RAS a focus
Kruger’s hatchery has a recirculating aquaculture system (RAS) with 1,000-liter IBC tanks. Sixty-one are used for breeding, 30 for fry and juveniles, two for incubation and 16 for filtration. Water is supplied through the property’s borehole, but during the dry season from May to August, the borehole can dry up so Kruger obtains extra water from Beira municipality. Locally-produced charcoal and stone filters are used for filtration, while the water pH is usually maintained at 7.0pH. Dissolved oxygen is controlled through venture systems and air pumps that are connected to UPS systems, as Beira experiences a lot of power dips and cuts. When these happen, a diesel generator is switched on within 10 minutes for the pumps to circulate the water.

“Power cuts occur almost once a month, for at least 10 hours, usually on Sundays when there is maintenance work on the power lines,” Kruger says. “Power dips happen often throughout the day and always shut off the water pumps. They may last from a few minutes to a couple of hours and it’s very frustrating. It also means that we need someone on site for 24 hours a day, seven days a week.”

Broodstock and fingerlings
The hatchery’s broodstock of Mozambique tilapia (Oreochromis mossambicus) comes from local sources but negotiations are underway to import from the Netherlands to improve fingerling quality. The fingerlings are around 0.03g and a mix of males and females.

They are placed in hapas until they are big enough to be put into ponds. Once they reach between 200g and 250g, they are sold to the local government and community.

Kruger is currently aiming to increase the number of fingerlings he produces each month by expanding his hatchery to three times its current size. Plans are also in place to obtain Nile tilapia (Oreochromis niloticus) and establish a separate system for broodstock quarantine. More accessible space will make operations more effective, he says, and prevent the overstocking of tanks.

“This is a critical issue at the moment. I estimate that we are losing around 75 percent of our fry as we are harvesting approximately 240,000 eggs per month,” Kruger says.

Kruger is negotiating with the government to acquire additional land to expand the hatchery and make grow-out ponds. Similar discussions are also underway with the administration of the Dondo district in Sofala province.

Kruger’s children helping out at the aquaponics farm.

Specialized feed
Feed includes imported maize gluten protein, tapioca starch, local rice bran, locally produced coconut oil and imported vitamins and minerals. The fry and juveniles are given 45 percent protein and the broodstock get 38 percent. Pellets are grounded using a pelletizer and dried in the sun, after which specific quantities are fed to the fry and juveniles every three hours. Broodstock are given specific quantities twice a day.

A feed production plant that produces feed commercially is also being considered, with an extruder and grinder already ordered from China.

Issues and challenges
The road ahead is long. Although Kruger works with government officials on farms, transport is unreliable. It’s also been a challenge educating the locals and making them understand that aquaculture can improve their lives. In addition, most people are poor with no means of developing projects so financing is a big drawback.

Despite these challenges, however, aquaculture is at a very early stage in Mozambique. Kruger knows there is a lot to do and has various ideas to achieve his vision of the industry. In addition to sustainability certifications, he is planning to breed Mozambique tilapia and Nile tilapia in separate systems given their different growth rates. Nile tilapia will be used as grow-out stock, while natural rivers and dams will be restocked with Mozambique tilapia in cooperation with the government, to re-introduce the species into natural ecosystems.

Blueprint for success
Although a range of species – both marine and freshwater, fish and invertebrates – are farmed in Africa today, organizations such as WorldFish believe that tilapia offer the most widespread options for growth, and that tilapia producers can help countries reach their production goals. To that end, Kruger is confident that his hatchery will play a key role going forward.

“The government of Mozambique is very interested in expanding aquaculture for sustainable development, to improve the quality of living for local farmers and the people and this is extremely encouraging,” he says.

“There is a lot of unutilized land that could be used for aquaculture projects like mine. We are currently the only hatchery in northern Mozambique. There are no other tilapia fingerling suppliers, and fish food is imported, not produced locally. Our aim now is to help the government supply these needs in future. The hatchery is a wonderful example of how a hobby can turn into a major project with the potential to change people’s lives.”