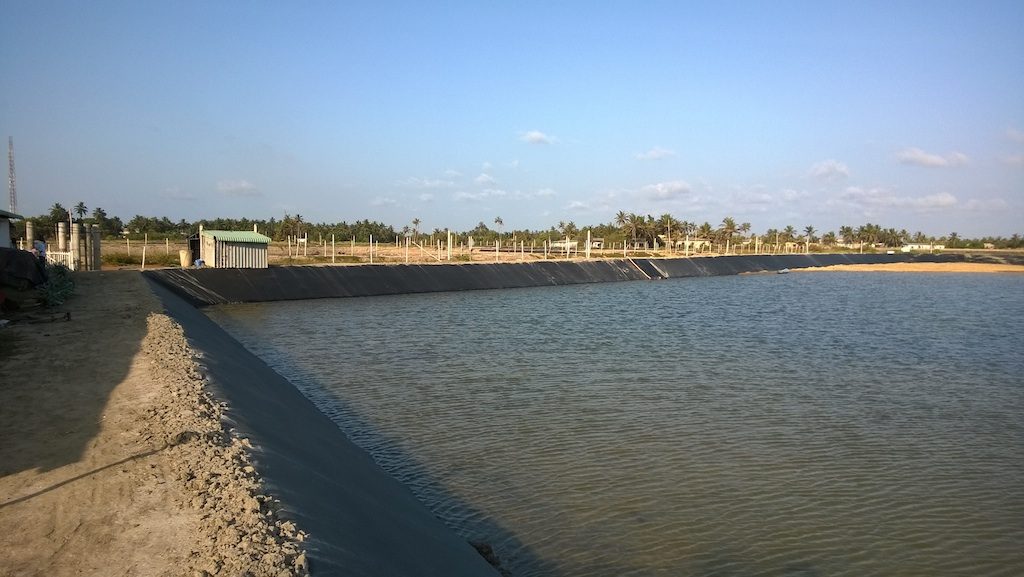 Established by Ghanaian and Vietnamese partners in 2013 Ghavie Aquaculture was designed to demonstrate the feasibility of shrimp farming in this west African country. Now the company seeks investors to expand the operation.

Fish is vital to Ghana’s food security with consumption estimated at 26 kg/cap/year, comprising around 60% of animal protein intake.

Declining fish harvests provide less than half the demand and imports supply some of the gap. Aquaculture, dominated by cage culture of tilapia in the Volta Lake and lower Volta River, continues to grow producing a reported 32,500 tonnes in 2013, an increase of 18% over 2012.

With the industry now established there is a pressing need for diversification in both species and technologies. There are several good candidates for farming among freshwater and brackish water species. Perhaps the greatest potential lies with marine shrimps with many thousands of hectares of undeveloped estuarine, coastal and saline flood plains suitable for shrimp farming.

Ghavie Aquaculture is the first shrimp farm in Ghana, established in 2013 by Ghanaian and Vietnamese partners to demonstrate the feasibility of shrimp farming in the country. It is situated at Ada Foah, just west of the mouth of the Volta River behind the sea defense dykes along the coast. Water is pumped from the ocean through a 350m pipeline and water quality is excellent.

The species chosen for culture because of its high demand in potential export markets was the black tiger shrimp, also known as the giant tiger prawn, Penaeus monodon, or Litopenaeus monodon. Local names for shrimp are “bolu” (Ewe), “monkƆ” (Twi), “son” (Gã).

Gravid female shrimp were purchased from fisher folk on the beach adjacent to the hatchery where they are collected with beach seines. One 200 g female with approximately two million eggs, costs around $30. Offshore trawlers harvest mostly pink shrimp, Penaeus notialis, but tiger shrimps regularly comprise 10–15 % of the catch.

The hatchery is built on the successful model of the large hatcheries driving the major shrimp farming industry in Vietnam. Its 34 concrete tanks (2m square 1.2m deep) were designed with the capacity to produce post-larval shrimps for stocking 500 hectares of ponds. The first batch of shrimp from two selected females, giving four million eggs, were hatched and grown to post-larvae in December 2013. The larval shrimp were fed entirely on pelleted diets brand named Royal Dragon monodon feed, made by Shang Long Bio-Tech Intl. Co. Ltd., Vietnam, a subsidiary of Thang Long, Taiwan, a major aqua-feeds company. The water is aerated continuously and changed as required.

Grow-out was in half-hectare ponds fitted with 200mm liners and 2HP electric motors powering aeration fan sets made by Chithanh, all from Vietnam. During transfer of post-larvae to the ponds in January 2014, there was a loss of only 2%. Grow-out was five months using Royal Dragon monodon feeds with a harvest of over 12 metric tonnes. The shrimp were frozen and test marketed locally.

On the strength of that pilot success the company is seeking a substantial investment to expand production to 50 hectares of ponds. Electricity costs are high and a new site has been located with the opportunity for water supply by gravity. The expanded farm will produce adequate volumes for export to the European Union and North America. Because of disease problems the major shrimp exporting countries in Asia, including China, Thailand, Vietnam and Indonesia have shifted in large part to white leg shrimp. Tiger shrimp are in relatively short supply.