Despite its remoteness, the Río Hollemberg smolt farm is equipped with state-of-the-art technology, providing Salmones Magallanes with about 4.8 million smolts every year. This is sufficient to fulfill the requirements of the company’s eight sea sites in the region. 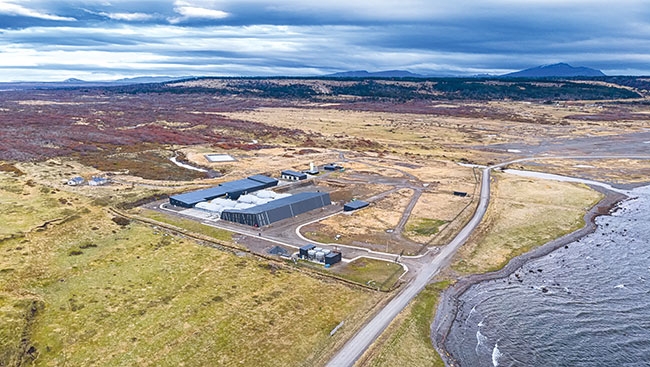 Panoramic view of the farm and gulf ‘Almirante Montt’

Before that, their smolts had to travel long, risky distances, including a trip through ‘Golfo de Penas’ (Gulf of Sorrows), a true nightmare passage for almost any sailor.

Now, and after US$ 30 million was invested in this site since 2012, smolts can be transferred directly to well-boats right in front of the facility.

Chilean RAS pioneer
Production designs and the general structure of this farm were developed by Oscar Garay, general manager of the company and a RAS systems’ pioneer in the country. Meanwhile, the RAS systems’ designs were entrusted to Billund Aquaculture, which also carried out assembly during construction.

There are four production units within these premises: hatching, first-feeding, fry and smolts, which are independent, both in operation and sanitary terms.

“Eggs are maintained at different temperatures depending on the time when fry need to be reared. Once hatching concludes and fry have absorbed their yolk-sacs, they are moved to the first-feeding room,” explained César Lobos, the farm manager at Río Hollemberg.

The first-feeding unit is composed by two rooms with individual RAS systems and control over oxygen, pH, salinity, and temperature, providing a combined capacity of 3.2 million fry.

“Fish usually stay here for about 12 weeks. Within this period, they grow in weight from 0.2g to 5g,” Lobos added.

The fry unit has its own RAS system and a production capacity of 1.2 million fry up to 35g, a weight that coincides with the time that these fish are vaccinated. The smolt room is intended to produce up to 1.1 million smolts of 100g.

“Fish are then pumped out through a duct where smolts are counted and transferred to a well-boat placed about 640m (700 yards) from the site and subsequently transported to our farms,” he said.

Just a small portion of the 15 há site (~37 acres) is in use, given that the project is just in its first of three stages, with the company producing smolts of 100-120g. The second phase is to enable production of 350g post-smolts and the third one points to double size and production capacity. The existing facility is approximately 6,300 m2.

Water treatment
Water is obtained from three different sources: the Hollemberg River, a well located within the premises, and directly from the estuary in front of the facility, which has a 12-15 ppt salt concentration.

Besides drum, sand and UV filters in all production units, the smolt farm includes a reverse osmosis plant intended to remove heavy metals that otherwise would pose a risk to fish.

“This is the same technology used by one of the major producers of bottled purified water in the country,” Lobos said.

Meanwhile, the facility averages a water renewal rate of 15-20% as well as a 1% water exchange rate. Despite this low water consumption, the company is working on a project intended to desalinate brackish water from the gulf ‘Almirante Montt’.

“With this, we could dispense with the use of water from the river in seasons of low water levels and obtain filtered water of optimum quality,” he added.

For example, the local electricity network that provides electric energy to Puerto Natales is unable to fulfill the farm’s requirements so the company decided to invest in diesel powered generators with an energy capacity of 2,000 kW per hour.

“For the production of electrical energy, we have generators, which operate continuously. The installed capacity includes back-up to ensure that there will be no interruptions in the supply,” said Lobos.

Salmones Magallanes is also looking at long-term solutions to energy concerns. “We have assessed the potential for generation of wind energy in the area, in order to install wind generators in future”, he added.

The facility operates its own oxygen station, which extracts oxygen from the air with a 95% purity, producing up to 90kg of O2 per hour.

Panoramic view of the farm and gulf ‘Almirante Montt’

Remote location
The smolt farm is located 23km (14 miles) south of Puerto Natales and 270km (170 miles) north of Punta Arenas, the largest city in the region of Magallanes. Despite its remoteness, lack of water and energy, and scarcity of human resources, the company decided to invest there because all their sea sites are in the ‘Almirante Montt’ gulf, an area surrounded by National Parks and incredible landscapes.

Salmon harvests in this region represent about 10% of Chilean production compared to levels below 1% just ten years ago.

“From the design and construction of this site, we have tried to generate the least possible impact on the environment,” said Lobos. “We worked on architectural designs that minimize the visual impact and preserve the natural conditions of the location where we operate. For example, during the excavations we worked with teams of archaeologists to guide us in the identification of possible elements of patrimonial value. We detected some places of interest which are fenced today and protected from any alteration.”

Likewise, there are recyclable garbage containers in the facility, which are subsequently sent to places specialized in the reuse of materials and waste.

University trained
Forty-five employees work at the farm. Most of them have university training with different backgrounds and expertize. The team is composed of marine biologists, aquaculture engineers, veterinarians, biochemical engineers, and mechanical engineers. “This allows the formation of a multidisciplinary team able to properly operate this complex farming system in which chemical, biological, electrical and mechanical elements interact permanently, in addition to those related to fish rearing and production,” said Lobos.

The highest percentage of the team corresponds to people from other regions of the country, who have had experience with other salmon farming companies.

Since there is a lack of professionals with salmon farming experience in the region, the company defined the productive and technical organization required before building the farm. At that time, the profiles were determined and the search for professionals began.

Regarding their relationship with the nearest communities, one special feature is that this production unit is open to visitors. “During construction and operation we invited the local community, schools, universities, companies and institutions to visit our site and learn about our processes,” he said.

The operators of the facility aim for it to become the largest smolt farm in the country, spearheading a revolution in Magallanes, a revolution which is being emulated by several similar farms being constructed in the region.

Plan for post smolts
The original project plan calls for construction of a pre-fattening unit to produce post smolts of 350g. This strategy is intended to further improve the sanitary condition of fish, to reduce the time at sea and minimize environmental risks to improve production yields.

With this unit in operation, ‘Río Hollemberg’ will have a production capacity close to 1,400 tons of post-smolts per year.