In late March, flooding caused substantial losses for the Moccasin Creek Hatchery in Moccasin, California. While millions of trout were lost in the flood a 10-hour long effort by the hatchery’s workers saved an estimated 200,000 fish, moving them by truck to the Don Pedro Reservoir where they are expected to thrive. 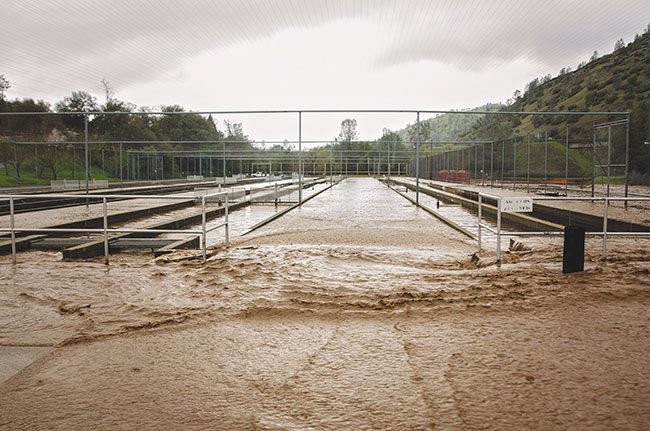 Flood waters overwhelmed the grounds of Moccasin Creek Hatchery causing the loss of millions of fish. In late March

The flooding was caused by an unusually heavy rainfall which raised the water level of the Moccasin Reservoir Dam. In response to imminent flooding, the San Francisco Public Utilities Commission ordered the evacuation of the hatchery – a 24 hour, seven day a week operation where most hatchery workers live in housing on site. Hatchery Manager Justin Kroeze says that over 11,000 CFS (cubic feet per second) of water ran down Moccasin Creek, overwhelming a diversion pipe, a diversion dam and an emergency spillway en route to the hatchery which sits at the base of the dam.

“So much water came up onto the hatchery grounds and it completely flooded all of our outside raceways where we rear our trout,” says Kroeze. “It got to the point where there was about eight feet of water over the top of the pond. This was the first time this has ever happened anywhere near this level.”

The flood couldn’t have come at a worse time as the hatchery was at peak production, ramping up for stocking at end of April. There were roughly 1.6 million trout in the hatchery.

In addition to grown, catchable fish ready to go for the summer, there were also smaller fish inside the hatchery building which were growing out for a future season. Staff were hoping these fish would be safe as the building itself wasn’t flooded, but debris plugged the water intake and the building lost water pressure a few hours into the flood.

When the evacuated staff got word a few days later that the reservoir was still in danger of failing and was going to be drained, they knew that they would lose whatever water was still coming into the fish still left in the ponds. If they had a chance to save any of the fish, they would have to act fast, Kroeze says, so the hatchery workers, local game wardens and workers from the local Department of Fish and Wildlife Field Office waded through mud, logs and trees to net out as many fish as they could. They raced the clock, knowing it was estimated that they only had four or five hours of water left.

“We hand-netted 39,000 pounds of fish that we hand-loaded into trucks and trucked them two miles down the highway and planted them in Don Pedro just to get them rescued. We started at four o’clock in the afternoon and we worked solid till two a.m. Saturday morning. We were rescuing the last of the fish in the ponds when we pretty much ran out of water. It was definitely down to the wire.”

Flood waters overwhelmed the grounds of Moccasin Creek Hatchery causing the loss of millions of fish.

After the flooding subsided, the cleanup began – over five days a private contractor hauled 250 yards of debris out of the ponds. But there were still repairs to be made. All of the security fencing along one side of the hatchery was lost, as well as a water line which fed the facility and the houses on site.

The hatchery’s trout bring in an estimated $6 million in tourism revenue from fishing in the area, so to help mitigate that loss, they were looking at getting catchable size fish from other hatcheries to distribute in some of their waters.

With the flood being called a ‘once in a thousand year event,’ Kroeze is hopeful that he’ll never have to deal with something like this again. However, it was encouraging to see support from local government departments as well as the general public.