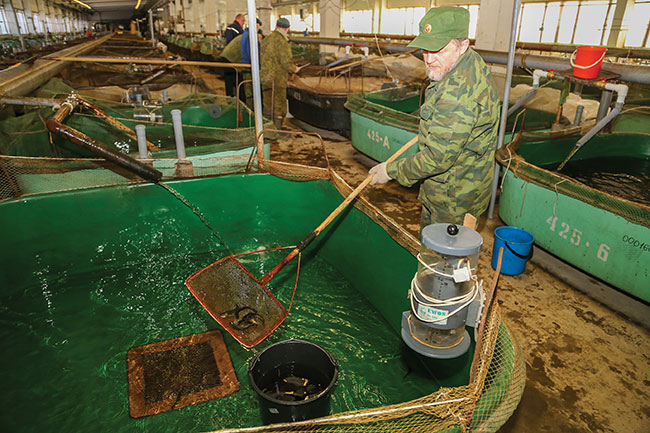 Several leading Russian scientific institutions, including the Federal Research Center for Nutrition and Biotechnology, as well as the Russian Federal Research Institute of Fisheries and Oceanography, are planning to participate in the program, he added.

Mazanov expressed hopes that Russian scientists would be able to contribute to import replacement by combining international experience and their own scientific research “to form a portfolio of innovative and sustainable genetic solutions.”

“One of the promising areas is the search for genetic solutions that allow growing Atlantic salmon in freshwater industrial RAS complexes,” Mazanov said, adding that this solution if developed, would boost investor interest in RAS projects in Russia in general.

It is expected that the new hatcheries would be established as RAS, Mazarov said, adding that they are planned to be organized with two independent modules: to obtain fry from incubated eggs and to raise it.

“The autonomous organization of these technological chains with the addition of a breeding and genetic section will pave the way to creating a highly intensive fully import-independent production and provide the [Russian] market with any amount of domestic broodstock. They [new hatcheries] would meet the demand in broodstock of salmon farmers in the Barents Sea, which amounts to tens of millions of units, avoiding the risks associated with the termination of its import,” Mazanov said.

“The Russian aquaculture market is highly dependent on import supplies of broodstock,” said Inna Golfand, partner at the Russian consulting firm. “Russia produces around 1,500 tonnes of broodstock per year, but these volumes are not enough to meet the needs of the industry. In addition, Russian Aquaculture has two factories in Norway that produce Atlantic salmon smolt, which is then shipped to Russia,” she added.

Under the Russian aquacultural industry development program, by 2030, farmed salmon species production in the North-West federal district is expected to jump to 150,000 tonnes, including 30,000 tonnes produced in RAS.

So far, production in RAS was limited to 4,000 tonnes per year, and there are strong concerns that the declared production targets would not be beaten, as Russian farmers are currently stripped not only of broodstock but also of RAS technologies, which are not produced in the country.

Related
From the Editor: The work continues on
Lost in the Black Sea
Large Siberian hatchery looks toward new era of country’s aquaculture
Sanctions jeopardize Russian salmon and trout production in the Atlantic