Fish farming in Black Sea may cease to exist. Photo: Institute of Biology of the Southern Seas

Being stripped from Western broodstock and equipment seafood companies in the Russian south and occupied Crimea fear to see their business crumbling. New hatcheries might partly solve this problem, but building them seems as a tricky task, especially since fish farmers have to deal not only with just sanctions, but also with the direct impact of the war.

Over the past few years, farmers in the Russian Black Sea region put a lot of effort to ramp up mussel and oyster production.

In 2021, the Crimean production of oysters and mussels was expected to reach 1,700 tonnes, estimated Andrey Ryumshin, Agricultural Minister of the Russian Crimean administration. Crimea has been supplying oysters to not only local hotels and restaurants during the summer season, but also met the demand of Moscow, St. Petersburg, and other parts of the country, he added.

The rapid seafood industry development was stemming from broodstock and technology imports from Western countries. Though making businesses with the Crimean-based companies remains prohibited for European companies since the Russian annexation of the peninsula in 2014, the supplies continued, in most cases through companies registered in other Russian regions.

However, the Russian invasion of Ukraine has changed the cards on the table, pulling a plug on the broodstock import, and putting the seafood industry in a tough situation.

The first hatchery
The hatchery for growing oysters from scratch is planned to be created in Sevastopol, in order to replace the French spat, Denis Profatilov, director of the Sevastopol economic development department has recently told the local press.

“A replacement broodstock of 10-12 million units of spat a size of 6 mm or more will be created in recirculating water supply installations, and we also plan to determine the optimal diet for oysters growing in these pools,” Profatilov said.

A group of scientists from the Institute of Biology of the Southern Seas of the Russian Academy of Sciences is now developing technology for growing oyster spat, taking into account the local environmental conditions. An unknown investor is expected to take advantage of the new technology, the Sevastopol economic development department said in a follow-up statement.

“Sevastopol farmers traditionally purchased 2.5 million units of oyster spat from France per year. Due to sanctions, deliveries have been stopped, though oyster farms managed to make purchases in advance for this season,” Profatilov said.

In 2021, Sevastopol accounted for 40per cent of the Crimean shellfish production. Farmers in other parts of the peninsula have also been barred from the Western broodstock.

“All the enterprises of the Azov-Black Sea basin fell under the sanctions regime, and now there is no way to produce oysters at all. It is a shame and a pity that in the Russian Federation, which consumes 15-16 million oysters a year, there is still not a single hatchery. The Black Sea fully relies on the French spat. I proposed the idea of launching an oyster hatchery, but the idea is still under discussion,” said Sergey Tatko an owner of a Sevastopol-based mussel farm Center for Marine Food Resources. 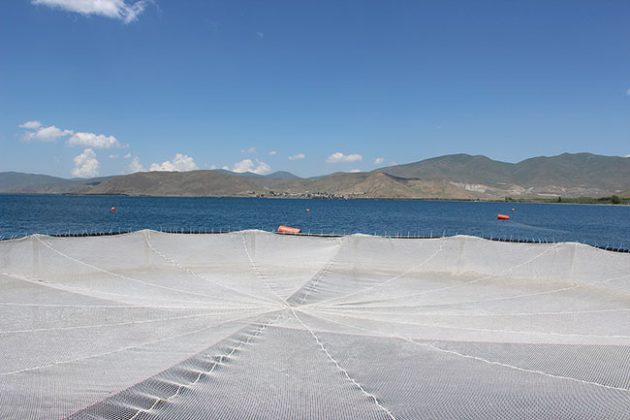 Farms in the Black Sea are jeopardized due to war. Photo: Institute of Biology of the Southern Seas

Canceled plans
Some investors have wrapped up previously declared development plans, citing the lack of imported broodstock as one of the main concerns.

“We have frozen this project. We did not set up collectors, as against the backdrop of sanctions the situation is incomprehensible,” Milovanov said.

The new farm was expected to be the largest on the Crimean peninsula. Azov-Don Sturgeon Company targeted to build it in three stages. In the first stage, the company planned to produce 5.5 tonnes of oysters and 300 tonnes of mussels per year in 30 collectors. The second stage envisaged tripling these figures. The final production performances were expected to depend on the actual state of demand.

The construction of several other smaller farms reportedly was also suspended. All key equipment suppliers refuse from selling anything to Russia.

“Sleeves for breeding the Black Sea mussels are produced in France and Italy. Due to a spike in [the exchange rate of] euro, we are faced with the problem of supplying these sleeves, we don’t even know what to do. We are considering all possible options, trying to find a Russian alternative that is more or less suitable. We even tried to use instead of a simple vegetable net, in which root crops are packed in the markets,” said Oleg Luzin, chairman of the Innovative scientific and technical team, Midiya.

Cost of war
However, the lack of broodstock is not the only problem fish farmers in occupied Crimea have to face. The continuing Russia-Ukraine war has nearly paralyzed shipping along the Ukraine coast due to the fights and drifting sea mines. Since the beginning of the conflict, farmers in Crimea have lost access to their farms.

For example, the Sevastopol-based Center for Marine Food Resources may lose a three-year harvest due to the Russian government’s restrictions, prohibiting civil ships to go out to the sea, warned Sergey Tatko the company’s owner.

“For the second month, we have not been able to go to sea. For our company, this is very dangerous and jeopardizes our harvest. The mussel, gaining weight, can sink to the bottom,” he said, explaining that this would mean that all production would be lost.

The farm is located one mile from the coast on 144 hectares. The harvest is estimated at 100 tonnes. Tatko said that no one has ever produced so many mussels in Sevastopol before. The products could be lost in a matter of several weeks.

The company already has no products left for sale, and was forced to close its retail stores in Crimea, he added.

“I wrote several letters [to government officials]. Someone must give a go-ahead to go to the farm at least once a week. We understand that the Ukrainians have planted these mines. But you can’t just take and destroy something that has been growing for three years,” he added.

In addition, the Center for Marine Food Resources uses an Italian specialized stocking in which mussels are placed to grow. There are no analogs in Russia, and import supplies have been disrupted, Tatko said.

The sea mines are expected to be a big problem for fish farmers in the Black Sea. The Russian Institute for CIS countries expressed worries that the sea mines deployed near Odessa could jeopardize shipping in the region for years ahead. Some sea mines have already reached Turkish territorial waters where they were disarmed. There is no reliable information on how many mines were laid across the region by both sides, but the figure is likely to be huge.

Tatko warns that if nothing is changed Russia may lose the entire oyster production already in 2023.

“Next year we will see a collapse of the oyster market. They will sell all the leftovers, and, in fact, that’s it. Or we will work in the old-fashioned way – smuggling [feed, broodstock, and equipment] through friendly countries. But I think it will not work. This is a very serious problem. There is no positive insight,” he said.