A 40-minute trip in a light aircraft – or a five-hour ferry ride – separates the north side of the Comau Peninsula and Puerto Montt in Chile. Bumpy dirt roads, artisanal fishing vessels, as well as national and private parks dominate part of the landscape nearby. It is also where egg producer AquaGen had set up its breeding facility. 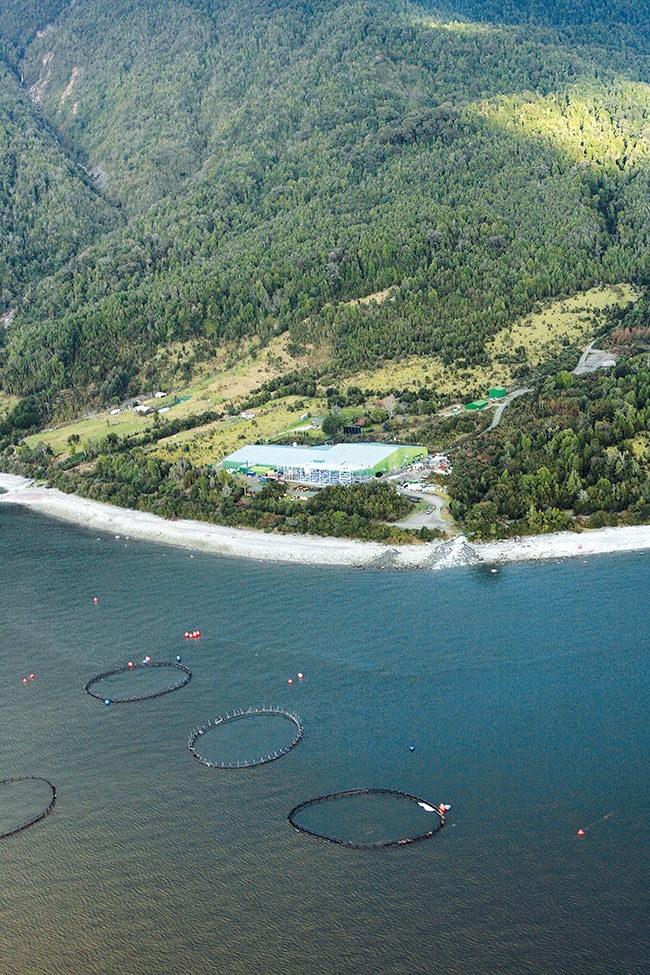 Isolated from the national electric grid, AquaGen equipped its broodstock facility with hydroelectric energy in 2012, which now supplies up to 80 per cent of the power requirements in its recirculating aquaculture system (RAS). That same remoteness has led to plenty of community and social initiatives supported by the company – and zero fish diseases in the past two years.

Some sociologists believe that simple geographic isolation sparks the creation of tribe-like relationships (remember Gilligan’s Island?). Perhaps that explains part of the strong tie between the company and its neighbors.

Output capacity
The Comau Breeding and Genetics Centre (BGC) was opened in November 2009 and consists of four epidemiological units: incubation, families, fry and breeders. These units are certified by the Chilean sanitary authority Sernapesca, which means biosecurity measures and engineering in place prevent diseases from spreading between rooms.

In the incubation area there are 4,200 zoug jars (buckets) able to hold ova from 4,200 different females at a time, totaling up to 80 million eggs per batch. “The responsibility of AquaGen by having so many eggs for our customers, leads us to spread our operation in seven farms and maintain incubation in three of them,” said Joaquín Garcia, production manager at AquaGen Chile. This facility represents 100 per cent of the company’s off-season production in Chile (see sidebar: Roe Supply).

The families room consists of 156 individual tanks, with 1,000 families comprising the base of the genetic program. “With the existing advances in genomics, now it is not necessary to implant pit tags in 10g fry. We map the parents. There is no need for 1,000 tanks to have them separated. Just one or two, to have a duplicate. That immediately reduces your needs for individual tanks. Then, when fish is at the sea, tissue samples and DNA tests from both groups (hatchery and sea) are compared regarding that information one looks for,” he said (see sidebar: Genomic Selection).

Production goal
Comau BGC aims to produce off-season Atlantic salmon eyed-eggs, as well as rear breeders and transfer them to other farms. “With our installed capacity, we have supplied between 40 and 50 million eggs during the past two years, in a batch that lasts from June to December/January. Eggs are ready for the market from the end of July and until February,” García explained.

These last two years have been remarkable for the site. “We spawn 3,300 females with about 60 to 70 males and found absolutely no disease. That has been a milestone, since in previous production cycles we faced BKD or IPN virus.” This achievement has been witnessed by the 26 people working here, 14 of which are original from the Comau Peninsula.

The ‘machine
Seeing isolation from the national electric grid and its energy-intensive RAS systems, in 2012 the company decided to install a 600kW water turbine in the neighbouring river ‘La Máquina’ (the machine, in Spanish). Meanwhile, the internal consumption ranges from 250kW to 500kW. “In the last six months, the turbine has contributed about 80 per cent of our energy demand, although it is very variable. For example, after three days with no rain we need to turn on an oil generator,” García said.

The company tried to develop a project intended to contribute electric power to its closest neighbours. “Unfortunately, we did not move forward because supplying the national electric grid requires a constant energy flow that we cannot guarantee, given the seasonality of rainfall and our internal requirements,” he added.

Despite this, AquaGen in Comau has found other ways to support its local community.

Education as priority
Total overall population in the Comau peninsula stands at 1,500. According to Rocío Espinoza, social worker in the high school of Ayacara (nearest town), most parents have not finished their secondary education, nor even primary school.

“This is more notorious in Buill, a nearby village where most parents only reached 6th grade, while others are still illiterate. Until not long ago, some kids drop out of school, and their parents used to say that their children needed to start working. Artisanal fishing, firewood and seaweed collection, for example, became sporadic jobs for them due to lack of income,” she explained.

Comau BGC has implemented an open-door policy for local schools, organizing student tours throughout the facility. The company also provides scholarships for those kids with the highest academic achievements. “We reward the first, second and third top grades from the 7th year of primary school up to the end of secondary education with a monetary contribution,” García said.

Rocío Espinoza revealed that these scholarships help 18 of their 176 students, a benefit that is expected to extend to another school in Buill. “Both schools have joined guided visits to the site and learned about the different production processes. Besides, in Buill the company helped with the construction of ramps for a disabled student. That has been the most significant aid for us, since it had the greatest social impact for the benefit of just one student,” she added.

Aware of this whole situation, the company has also encouraged completion of schooling among its workers in cooperation with the local high school. In fact, several of those employees have continued studies and are currently in technical institutes.

FASTER RESPONSE
Rocío is thankful for all the help. She says that a broken window in the school might take several months to be replaced if public funds are used.

Bureaucracy can be challenging, said Roberto Ortíz too, technical manager at the local health-care facility. He said the process for getting medical oxygen tanks from the city office is very slow. “We recently asked for five tanks, which took about five months to arrive. By contrast, when we received tanks from AquaGen, it took them about 20 days to help us. And for free! This makes our work a lot easier given that medical oxygen is a basic input for us but very scarce in this peninsula,” he said. In addition, the company provides free fuel once a month.

“These contributions allow us to attend medical emergencies or aeromedical evacuations where medicinal oxygen is required. They take us out of trouble,” he added.

AquaGen’s maintenance department has always been ready to help with equipment repairs around the community. “We have also painted some classrooms and fixed problems in their power generators,” said the company’s head of maintenance, William Lagos.

“If we quantify all this aid in terms of money, those are lots of resources we are saving and using in further social assistance for our neighbors,” Ortíz said.