The world's first salmon hatchery to achieve four-star Best Aquaculture Practices (BAP) status is getting ready to catch the next wave of aquaculture growth. Northern Harvest Smolt Ltd has received approval to begin expansion work at its Indian Head Hatchery in Stephenville, Newfoundland and Labrador in Canada. 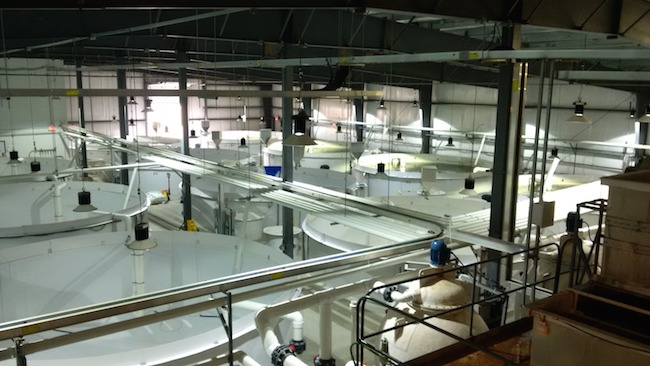 The Indian Head Hatchery provides smolt to licensed sea cages of the Northern Harvest Sea Farms, which is now owned by Marine Harvest.

These saltwater farms have a production capacity of 4.5 million fish annually, from egg incubation through to smolt. Salmon harvest exceeds 15,000 tons annually.

“The recent release of the Northern Harvest Smolt expansion is absolutely fantastic news for the industry. They’ve gone through due diligence to cross their Ts and dot there Is, and presented to the government a very solid business case from an environmentally responsible perspective. The committees have reviewed it and released it from further assessment and now the work can commence and we can get started,” Mark Lane, executive director of the Newfoundland Aquaculture Industry Association, told Hatchery International.

The $51-million expansion project is intended to improve smolt production capacity to 6.7 million per year, the company said.
The expansion also entails upgrades to improve efficiency of the existing facility and new supporting infrastructure such as freshwater and saltwater supply and effluent treatment and discharge. The company said the hatchery will also have “the latest in re-circulating aquaculture system technology.”

It expects the expansion project to enhance the quality of salmon smolts produced for the company and to increase salmon aquaculture production for the province.

“The original hatchery facility of Northern Harvest was awarded the world’s first 4-Star BAP certification for a salmon hatchery in 2014. This is taking it to the next step. This will enable us to grow larger smolt on land and produce more smolts so we can expand our operations at sea,” said Lane, adding the expansion will also create 24 new jobs for the province.

The project’s path to securing environmental clearance was not without challenges. The Atlantic Salmon Federation accused Northern Harvest of deliberately omitting aspects of the expansion of the marine component of their operations. “This appears to be a deliberate attempt to avoid having their plans for expanded marine farming subjected to the scientific and public scrutiny of an environmental assessment,” the organization said in a statement.

“As acknowledged by the proponent, that undertaking includes expansion of farming activities in the marine environment, activities which are known to have significant negative impacts on wild Atlantic salmon and the surrounding environment,” it added.

The province’s Department of Municipal Affairs and Environment nonetheless approved the project, subject to certain conditions, in September.