As the global demand for quality seafood rises, fish farmers are recognizing the need to gain greater control over their operations. More farms are exploring ways to create smarter, more sustainable operations and land-based aquaculture is emerging as a viable way to reduce risk and maximize profitability. 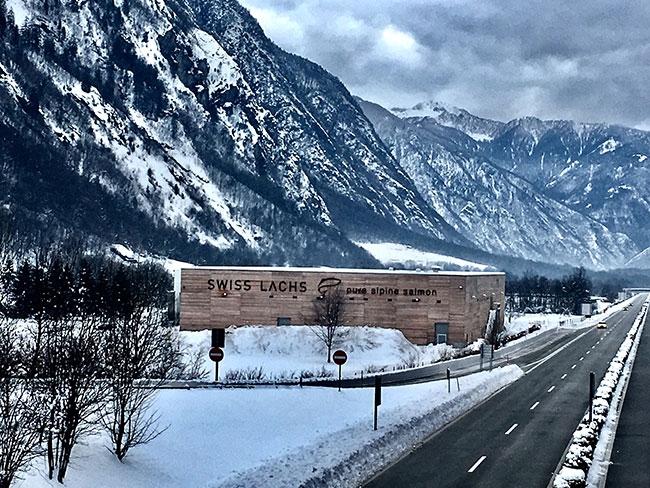 Swiss Alpine Fish, a land-based salmon farm in Switzerland, embarked on its journey toward sustainable production nearly four years ago. It is among the early adapters of RAS2020, a modular recirculating aquaculture system (RAS) design developed by Veolia Water Technologies.

Tapping Krüger Denmark to deliver this new system to its facility in Lostallo village, Swiss Alpine Fish started construction of its new state-of-the-art farm system in 2015.

“Construction took 14 months. It began in September 2015 and fish were in the system by November 2016. Not only does the RAS2020 provide great performance, it’s also reliable and respects the environment and fish welfare. Its advantages are its low footprint, innovative design and the warranty to have optimal water quality,” Hofmann says.

For Swiss Alpine Fish, the RAS2020 has provided a turnkey solution to farming salmon in the Alps, while Veolia’s expertise in water and technical support has been an integrated part of the company’s success.

Founded in 2013, Swiss Alpine Fish receives batches of 50,000 salmon eggs every 10 weeks from Stofnfiskur in Iceland. It operates on a 24-month- production cycle, from the egg stage to 4 kilograms. Fish are given Biomar feed free of ethoxyquin each day through an automated feeding system, with rations adjusted according to fish size and appetite. An average of 1.3 to 1.5 tons of feed is given each day depending on standing stock in the system, while water quality is checked daily.

System specs
Best suited to species like salmon, trout and sea bass, the RAS2020 is designed to reduce capital and operating costs, maximize production and improve sustainability in land-based aquaculture. Based on recirculation, it includes water treatment technology that can optimize growth, reduce feed conversion ratio (FCR) and improve survival.

Two circular tanks are positioned around a central tank that has a platform and contains a biofilter. The two circular tanks are divided into a number of sections by permeable grids to separate different groups of fish. Flow markers allow water exchange in each tank section in under a minute and adjust flow rate to the most optimal level for the fish. Parameters such as oxygen, pH, CO2 and temperature are kept at optimal levels with an advanced control system.

Fish enter one of the sections in the inner of the two circular tanks as juveniles. A grader installed on the central platform grades them as they grow, before they are transferred to another section in the outer circular tank once they have reached a preferred size. As they grow in the outer tank, a tank separation grid expands the section they are in to create more room. The fish are then transferred to the next section of the outer tank followed by the next until they reach the tank’s last section at harvest size. This section is connected to two purge tanks, 385 cubic meters each, allowing the fish to be moved easily without pumping. They remain there for several days until harvest.

“One of the RAS2020’s unique features is the possibility of moving fish through the system using moveable grids, reducing stress significantly,” says Dr. Michael Bech, project developer at Krüger Denmark, a business unit of Veolia. “Another is the adjustable water velocity and uniform flow pattern, which gives an even distribution of fish, reducing competition and stress.

“The RAS2020 is cheaper and faster to build than a conventional farm of the same capacity because it’s very compact with a footprint of 3,340 square meters, and designed with four concrete channels and no additional piping under the concrete floor. Our aim is to deliver safe, sustainable aquaculture solutions with the highest standards for biosecurity, fish welfare and water quality.”

Harvesting
Water quality is vital to success in salmon farming, farm manager Hofmann says. “It’s the key to producing healthy fish and achieving an optimal performance on the farm. On average, our CO2 levels are 6mg/L, ammonia is 0.3mg/L, turbidity is 0.7NTU, and pH is very stable across the entire system at 7.3,” he notes.
The RAS2020 has multiple probes inside the tanks that can continuously measure and monitor water parameters. The probes are connected to an alarm system that can generate emergency alerts and allow the staff to quickly respond if problems occur.

Reared in freshwater with 24-hour light, it takes up to one year for the salmon to reach a weight of 150 grams, and another 10 to 12 months before they reach an optimal harvest size of 3.5 to 4 kilograms. Once they’ve reached this size, they are processed at Swiss Alpine Fish’s processing plant, electrocuted and bled before gutting.

Although mainly head-on, gutted fish is sold, the company has recently established its own onsite smokehouse, where 20 percent of its fish is smoked before being sold online at the farm shop and to retailers and distributors.

Environmental controls
Strict biosecurity measures are in place in the facility. Color-coded tools and gear are used in each part of the production process, all equipment and fish tanks are cleaned and disinfected continuously and the use of footbaths and hand sanitizers are enforced. Water is disinfected as much as possible through multiple UVs within the RAS2020.

Good waste management is among the most important drivers for companies to adopt smart RAS technologies. Veolia’s state-of-the-art wastewater treatment system allows Swiss Alpine Fish to discharge clear water to a nearby river, and meet Switzerland’s toughest and most restrictive quality standards for water discharged into local rivers. Through the RAS2020 system, fish waste is also collected before being sold to a local biogas facility.

“The flexibility and simple design of the RAS2020 is another great feature,” says Thomas. “We can adjust all parameters with the click of a button. For example, water flow can be adjusted so the fish swim hard in our tanks. This gives us an excellent growth rate and good flesh quality. Our fish are performing extremely well. By 2021, it’s said that the RAS2020 will be producing up to 8,000 tons of fish on land. That’s very promising.”

RAS is emerging at a good time to meet the changing needs of land-based aquaculture and the growing demand for seafood. New, innovative systems will allow companies to increase operational performance and give producers the advantage of being able to promote what they say is a clean, sustainable approach to farming fish.

Polyethylene. High-density polyethylene is more effective in challenging terrains such as heavy soil, but there can be a lot more difficulties with polyethylene as the pipes age.”

If a sprinkler system is providing inadequate coverage, he suggests trying a two-headed sprinkler system for more efficient watering. One must also consider how much water is available and how long the system should run.

Related
From hobby to hatchery
Catch the wave
Yellowtail taking forefront in RAS farming
RAStech 2019 in Washington is less than a month away!