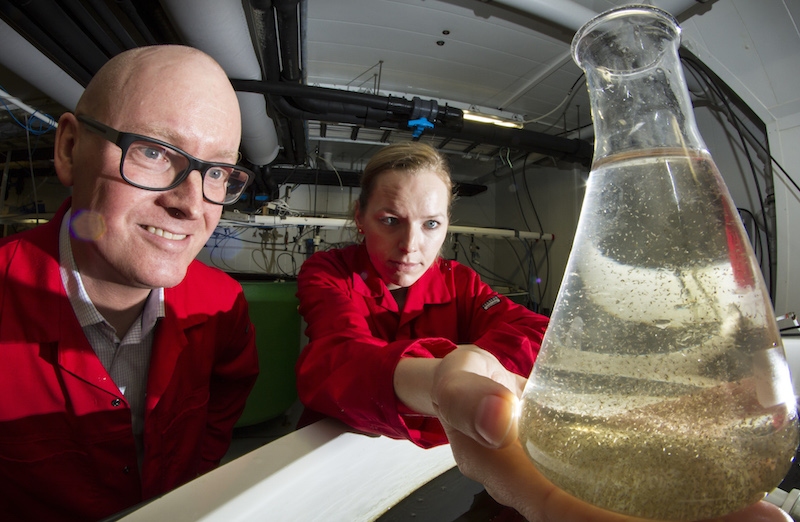 C-Feed is making the jump from small scale production to industrialization of of copepods. The tiny crustaceans are used as live feed for the fry of fish such as tuna

Unique technology from SINTEF, Scandinavia’s largest independent research organization, plus NOK 13 million in fresh capital are fuelling the development of a factory for copepods in western Norway.

C-Feed, a spin-off from SINTEF, has so far produced copepods on a small scale but when the new Trondheim plant opens this autumn, the company says it will start by increasing its production by a factor of 10.

The tiny crustaceans will be used as live feed for the tiny fry of tuna, ballan wrasse, lobster, halibut and other marine species.

“Until now, cultivating tuna has been an extremely demanding, not to say impossible, process,” says C-Feed CEO Rune Bjerke. “Our copepods have turned out to be very suitable as food for fry, and we believe that tuna could represent a major market for us, since tuna are in great demand with sushi enthusiasts all over the world.”

The copepods are also very likely to increase success in the early rearing of other marine species such as halibut, lobster and ballan wrasse.

Bjerke points to ballan wrasse cultivation as also having great market potential, particularly in Norway. “The production of fish-feed for ballan wrasse farmers could become our largest market in Norway,” says Bjerke.

C-Feed has attracted NOK 13 million from new investors, existing shareholders and Innovation Norway. The capital will be used to build and operate a new factory in Vanvikan outside Trondheim, which will enable production to be increased by a factor of ten compared to the company’s present site.

“We are greatly looking forward to making the jump from small-scale production to the industrialisation of copepod cultivation,” says Bjerke.

The company has already started small-scale exports to customers in several European countries, and expects that its turnover will be in the region of NOK 10 million in the first full year of operation of the new plant.