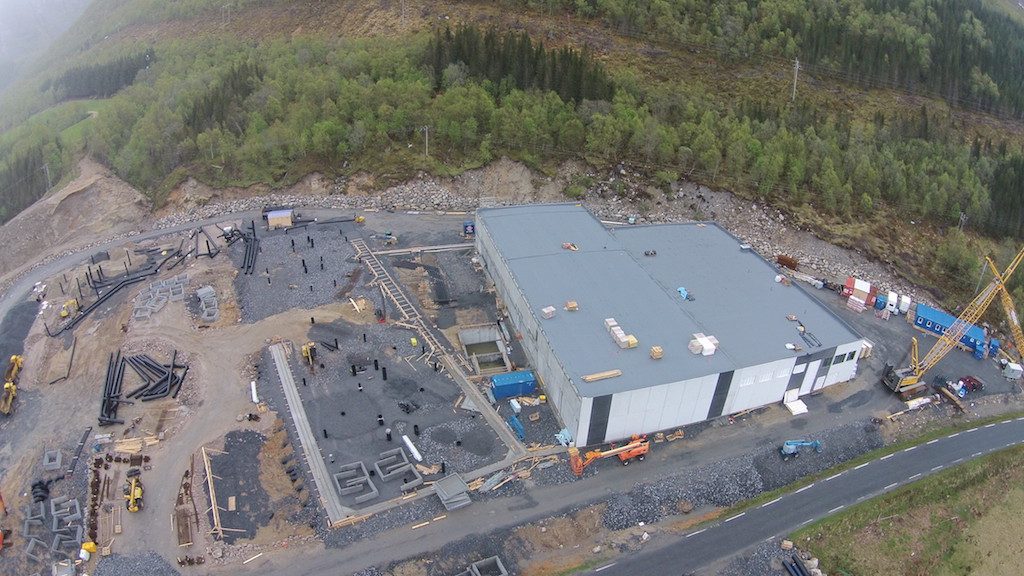 The RAS site, which is based in Radøy, in the Nordland region of Norway, will have seven divisions – from hatchery to on-growing, handling both saltwater and fresh water. In total, the tank volume is 24,000 cubic meters. The hydraulic capacity in the recirculation system is 35,000 cubic meters per hour. And the facility has a price tag of around 300 million NOK (US $36 million)

According to Tor-Arne Gransjøen, general manager at Helgeland Smolt, the hatchery and smolt farm came about because the company needed more capacity.

“We already have a large hatchery, Sunnfjord Smolt, with a production of 13.5 million smolt annually. But the capacity is bursting at the seams. Instead of expanding the existing site further, we decided to build a completely new smolt farm,” Gransjøen says.

And owing to a growing demand for larger smolt within the Norwegian industry, the company started looking into the possibilities of a site that would grow smolt up to 200-300g.

“As there has been so much talk about using on-growing smolt, we decided to look into it. To do this, we would need a great tank volume and a large site,” he says.

Gransjøen says what is special about the site under construction is the size.

“There is nothing like it in Norway – and I am not aware of anything else like it anywhere else. The actual building will be 13,000 square meters. The tank volume is 24000 cubic meters, with a water recirculation capacity of 20 tons. The bio capacity is 2000 tons as this is the limit of the license. The plan is to produce eight million large smolt,” he says.

The other thing that is special about this site is the building technique, Gransjøen says. For example, the tanks will be made of prefabricated concrete. There is also no floor between the tanks.

“It is a complex building due to the size, although the technology is fairly standard. It is very compact, but can take a large fish farming volume. It is the biggest contract the builders have ever had,” he points out.

So far, one third of the building is under roof. “We are prioritising finishing up the hatchery part, which will be completed by Christmas. Roe production will start in 2016.”

“The big halls for the tanks will be done next summer. Our first delivery will be in April 2017.”

Gransjøen does not think the post-smolt production will be challenge-free.

“There will be biological challenges. But we will learn as we go along.”

“We will be doubling the average smolt weight. We are thinking of producing smolt up to 200-300g. However, it might not be necessary to go further than 180g.”

He is not worried about demand and supply. “We are already fully booked,” he says.

The interest in working at the new site has also been great:

“For 10 jobs, we had 150 applicants. A lot of these had great qualifications, so we had to say no to a lot of good people,” he says.