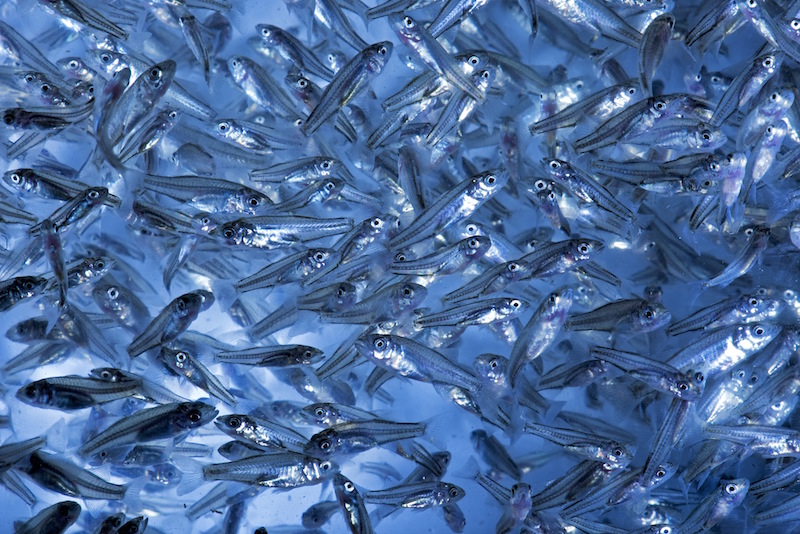 Selecting sea bass fingerlings for on-growing in the extreme temperature range of the northern reaches of the Adriatic Sea is a task which Slovenian fish farmers, Lean and Irena Fonda, have approached with immense care and attention over the last 10 years.

Despite running what Irena describes as a “boutique unit,” their sourcing of stock for the family-owned Fonda Fish Farm in Piran Bay, the southern-most point of the Slovenian Sea, combines their practical experience of farming sea bass with their scientific and professional backgrounds. Irena, for example, completed a PhD on the use of molecular biology in oncology while Lean, her brother, holds a BA in biology and is an acknowledged expert in Adriatic fish.

“The starting point for me, when I was looking a couple of years ago for a hatchery to replace a previous supplier, was to find out if the people I was talking to actually knew as much as they said they did,” Irena told Hatchery International.

“I have a few questions I ask which pretty soon reveals how much my potential supplier really knows. I also have a mixture of good and bad supply experiences to serve as a background filter to anything I’m told.”

One of her experiences is that by being “boutique” as a business, some suppliers tend to treat you as a small-time operator. Fonda is certainly not large, of course, currently running at an output of around 80 tonnes a year with an increase to 100 tonnes in process.

“That doesn’t make us small in other ways, however,” said Irena. “We have developed our own Fonda Piran sea bass brand, backing it to the extent that consumers now ask for our fish by name in hotels and restaurants. We also run a thriving “aquaculture tourism” venture, which has seen visitors from 70 different countries tour our operation in the last 12 months.

“Sourcing the right stock to ensure we have the quality of product people want to buy is therefore vitally important for us. We also need fish which are capable of good performance in our water conditions.”

“We had a good experience with a previous supplier, followed by a very bad one in which we were told very late on that the fingerlings we’d ordered wouldn’t arrive when we wanted and would be smaller than intended when they did arrive,” she said. “That was no use to us, with the bad experience definitely out-weighing the previous good one.”

The subsequent choice of Ittica Caldoli was therefore initially based more on people than fish.

“I looked at many hatchery options before settling on our choice,” said Irena. “What impressed me, as a scientist, was that the Italian hatchery was, and still is, heavily involved in research and development. The unit is currently contributing to seven or eight European Union-funded research projects, has a high technology approach to its business and is staffed by people who have all held senior management or owner positions in other units.

“There’s both a practical and scientific base to the operation and a willingness by owner, Andrea Novelli, to work with us on our own trials programme to select the most suitable fingerling sizes and delivery times to maximise the efficiency and productivity of our operation.”

In the early stages of Fonda’s fingerling contract that meant coping with a wide range of supply dates and fish sizes.

“We looked at intake stock sizes from 3.5 grams right through to 100 grams,” said Irena. “We also explored delivery dates from April through to the end of July.”

“Our key requirement was to get good growth when conditions allow. Being in the northern part of the Adriatic our temperature range is quite large, resulting in six months of good growth and six months of poor growth, all subject to the usual differences between years, of course.”

“Our conclusion was that 6-12 gram fish suit our normal conditions best with the ideal delivery time being in May.”

“As a ‘boutique’ operation, we also need to have all our fish in the top grade category. I know hatcheries tell each customer that they are giving them their ‘best fish’ but for our scale of business anything but the best, across the entire delivery, will cause us problems.”

Once in production at Piran Bay, the new fingerlings are treated to a much less intensive stocking and growth regime than is the case on many larger units.

“Our commitment from the beginning was to farm in a natural way, however, with no chemicals and no forced feeding,” said Irena. “Stocking rates are also kept low, rising to no more than 12 kilograms per cubic metre, which is even below the accepted bio-standard.”

“Unfortunately, when you get to the end of the process and have harvest-ready fish they aren’t ‘gold-plated’ in appearance. As biologists we believe in what we’re doing, however, and are confident that our attention to detail from the fingerlings through to the finished product is delivering an extremely high quality fish.”

The farm’s branding programme is paying off as well, ensuring that the Fonda name is now well known to consumers in Italy, Austria and Slovenia.

“When we started out we were frustrated by the lack of consumer demand for our fish in the domestic market,” said Irena. “Initially, therefore, we had to sell our fish into Italy, a market which took 90% of our early output.”

“We’re now selling 70% of our fish to Slovenian consumers, however, having worked to educate domestic buyers concerning the quality of what we are able to offer them.”

“I know some in the industry have questioned what ‘those biologists’ are doing in Piran Bay, but we’re happy with the results we’re achieving and delighted that we’re able to introduce many new people each year to our style of sea bass production.”