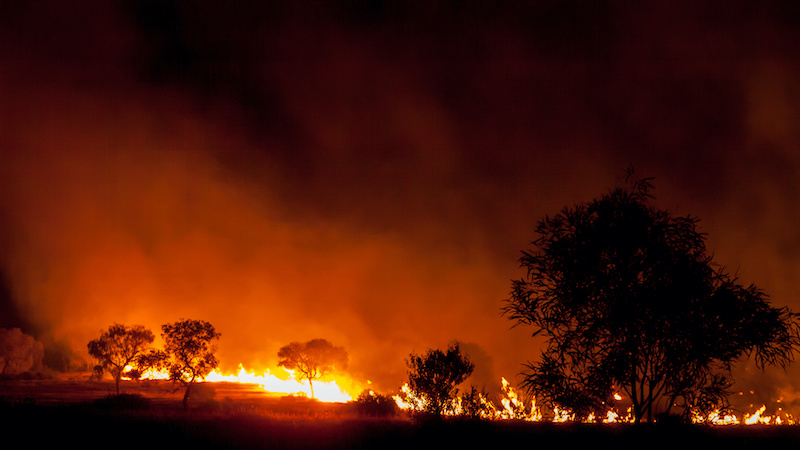 Continued drought and increasing temperatures have cause massive bush fires across Australia, and the aquaculture industry is feeling the heat.

It’s often been said that the aquaculture industry – being extremely sensitive to changing conditions – is the canary down the mine for the impact of climate change. In Australia, the uncontrollable fires currently raging, as of this writing, began in early September following years of below average rainfall and three consecutive years of searing drought. And the consensus that they are a consequence of global warming driven by CO2 emissions is becoming widely accepted.

The hatchery sector, relying as it does on sales to the growout sector, is not just directly vulnerable to fire damage but is affected by what happens in other parts of the industry.

No state has been spared and it seems like the whole country is ablaze.  Even more worrying is that the fires have reached an intensity never before witnessed by experienced firefighters – creating their own weather patterns, which drive embers and fireballs well in advance of the fire front, isolating firefighters and townships. The dry conditions have left even tropical rainforests vulnerable. At the time of this writing, 11,000,000 hectares have been scorched, 30 lives lost, nearly 3,000 homes destroyed, more than 3,000 farm buildings and transport, power delivery and communications infrastructure have been left in tatters. If a retreating army wanted to deny an invader any advantage whatsoever, this is what it would look like.

To put it in perspective, the fires have destroyed an area larger than Iceland, Hungary and Cuba. As individual fires join up to create mega-blazes, the fire perimeter stretches over thousands of kilometres and only heavy rain will stop its unrelenting spread.

Smoke has been blown across vast areas and has reached the stratosphere where, driven by the jet stream, it has already circled the globe. Major population areas, such as Melbourne and Sydney, have been disrupted where smoke and particulate matter readings have been the worst on the planet.  On the fire grounds themselves, thousands have been evacuated and settlements abandoned to their fate as a lurid tsunami of flame and smoke sweep towards them.

It has left Australia, and indeed the world, with a frightening picture of what the future holds, unless a concerted effort to reduce the build-up of greenhouse gases in the atmosphere is undertaken as a matter of urgency.  As it is, these fires have emitted nearly as much CO2 as Australia’s annual output; this is without taking into account the harm and ultimate cost from other toxic chemicals such as asbestos released from old building material and from fire retardants.

To this point, Australian aquaculture has been miraculously spared from any direct damage, though, some shellfish farms have had to suspend harvesting due to polluted water, and smoke haze has reduced photosynthesis at a time of the year when open hatchery systems are relying on phytoplankton blooms to drive fry pond production.

The traditional fire season in Australia runs until early March; this season, without major rain events, could stretch into April. Victoria’s rainbow trout sector is particularly vulnerable and is just recovering from the Black Saturday fires of 2009 that burned out 450,000 hectares, killed 173 people and sent another 400 to hospital with injuries and burns.

It’s the medium- and long-term implications of these unprecedented bushfires to the aquaculture industry, and the hatchery sector in particular, that are of the greatest concern. Those concerns are both environmental and economic.

While the fires are still raging, the full cost of the reconstruction would only be a guess, but on top of lost earning capacity, it’s going to draw a huge amount of spending power out of the economy. Although a big part of the area scorched is in remote forestry regions, it encompasses the snowfields, the shady mountain glens and the seaside, as well as prime productive land.  Some areas that were attractive because of their quaint 19th century ambience will never be rebuilt. It is not yet known the damage to the soil structure the inferno has caused, but without doubt, tourism and agriculture will suffer.

Seafood sits at the top end of the household budget as far as cost is concerned and any economic downturn will not help sales. Naturally, this will flow on down to hatcheries.

From an environmental standpoint, the damage will take decades to repair itself, even if that is possible. Presuming the change in climatic conditions that allowed these fires to take hold and rage in the first place are here to stay, there’s conjecture as to whether these ancient forests can regenerate themselves to their former role as catchment water purifiers.

The consequences of this to the whole of the aquaculture sector are too vast to quantify, other than to point out the impact it will have on the water quality in the freshwater and estuarine sectors. For example, the absence of mature riparian vegetation since 2009 in the Victorian uplands has seen a significant rise in summer water temperature peaks on the surviving trout farms.

Further north, in tropical and subtropical New South Wales and Queensland, where the bulk of Australia’s barramundi and prawns are farmed, the damage hasn’t been as widespread and the arrival of wet season rains have put an end to the fire danger for the moment. However, should similar conditions return next season, as is widely predicted, the risk to water quality and temperatures will become major issues.

The winners from all this have been the hatcheries that have shifted their operations to indoor recirculation operations. This has been widespread in the oyster and mussel sectors of Victoria, South Australia and Tasmania.  The vast majority of the barramundi seedstock are now produced in RAS hatcheries using conditioned broodstock. The sophisticated Atlantic salmon industry in Tasmania has taken similar precautions to secure smolt supplies.

Another aspect of the widespread fires, and for that matter, the greater intensity of the tropical cyclones and other storm events, is boosting interest in RAS. The farm or hatchery doesn’t even have to be in the direct path of the destructive force; its operational viability can be disrupted by isolation. On the other hand, RAS facilities can be established in an industrial estate in an urban environment where services are more secure and outages promptly restored.

There is no doubt that aquaculture stakeholders in other parts of the world will be watching the fires in Australia, as well as those in the Arctic Circle and the Amazon Basin, and taking similar steps to future-proof their viability.

Related
Behind the scenes: Understanding oxygen delivery systems
Biomarker tools for combatting the impacts of global climate change
In search of the right mix
‘Reckless policy’: Aquaculture industry weighs in on Liberal plans