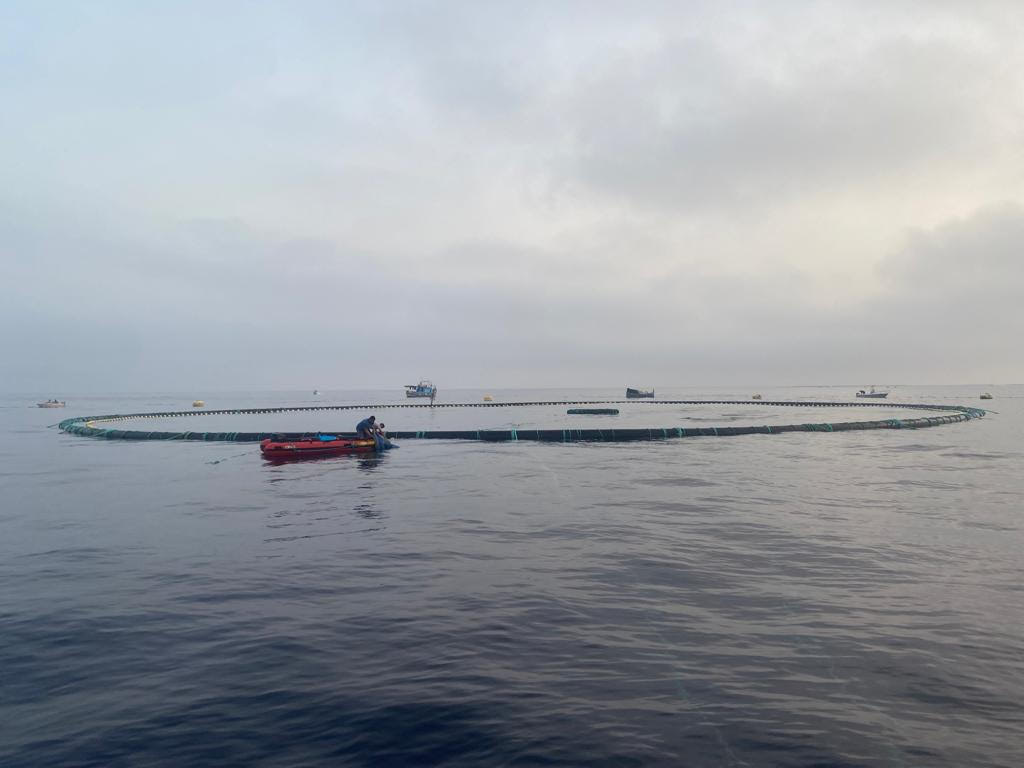 Fifteen million Atlantic Bluefin Tuna (ABFT) fertilised eggs were collected from a Malta Fish Farming Ltd. (MFF) fish farm cage in Malta during the 2022 spawning season, distributing ABFT eggs for research and development on the propagation of this species to interested parties in different parts of the world.

This project is run by Dr. Robert Vassallo Agius, who has been collecting ABFT eggs from offshore cages since 2008. There has been an interest to develop self-sustained aquaculture and propagate the ABFT in captivity since the early 2000’s, when the first EU scientific and technical meeting, “The Domestication of Thunnus thynnus” (DOTT) was held in Cartagena, Spain.

This mammoth challenge entails holding the giant fish captive as broodstock in large floating offshore cages, obtaining viable fertilised eggs, rearing the larvae and producing healthy fingerlings for further grow-out on suitable, scientifically formulated and environmentally performing feed, as it is done successfully worldwide with many other aquaculture marine species.

Twenty years after the DOTT project and following the successes of European Union funded projects, namely REPRODOTT (reproduction), SELFDOTT (relf-sustaining) and TRANSDOTT (transfer of knowledge), the baton went into the hands of research institutes and commercial investors, who were encouraged to take up the results to develop commercial viability.  However, ABFT juveniles have not yet been produced on a commercial scale from a closed cycle system and several institutes and companies all over the world are still pursuing this challenge which creates a demand for ABFT fertilised egg supply, which is sourced from MFF.

Due to strong currents around the Maltese islands, egg collection from the tuna cages in Malta has been a challenge over the years, and, with the collaboration of scientists from the Korea Marine Fish Hatchery Association, an innovative egg collection net was designed to collect eggs from cages moored two to three kilometres offshore. However, all tuna farms in Malta were requested to move seven kilometres offshore by the Maltese government in 2017 and this created a greater challenge due to deeper waters, different water temperature profiles and completely different current situations.

Egg collection amounts were significantly lower in this seven-kilometre zone, when compared to averages of 30 million eggs per year from specified inshore broodstock cages in previous years. Different strategies were used over the years, with a marked significant upgrade to the collector net carried out in 2022. The graph below shows the numbers of eggs collected from the MFF site seven kilometres offshore in the southeast aquaculture zone of Malta. 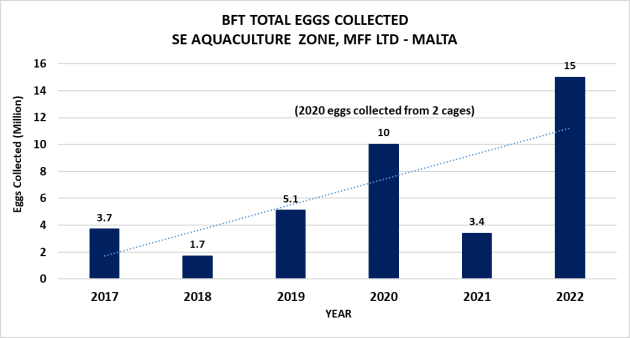 The indications show that there was a notable increase in the numbers of eggs collected from one cage in 2022, and this augurs well for future collections in 2023 and beyond.

Daily egg collection off the Maltese coast is very variable due to the offshore conditions, and fluctuations in current, water temperature and the depth at which the fish spawn all contribute to the success or failure of egg collection. The egg collector only accesses the top seven per cent of the tuna cage net, and only 25 per cent of the cage diameter, so it is evident that most of the eggs are released into the wild.

The role of tuna production cages in contributing to the wild stock through concentrating spawning fish has also been highlighted by a number of scientists previously.

Taking all these facts into consideration, it is very difficult to calculate the actual number of eggs produced and released into the wild, however according to scientific reports published by the International Commission for the Conservation of Atlantic Tunas (ICCAT), it is known that ABFT typically spawn at least a dozen times during a given spawning season, and a large female can produce at least around five million eggs each time. This means that from a cage of 100 broodstock ABFT, if we assume that half the fish are females, they would produce around 250 million eggs per spawn or a total of around 2,500 million eggs per season, of which we only collect a mere 15 million eggs, much less than 1% of the total amount produced throughout the season.

This positive propagation of tuna eggs being released in production cages has been observed not only in Malta but also widely within the Mediterranean. In a previous restocking pilot project financed by MARS GmbH Germany, the pet food company, in collaboration with MFF and TunaTech GmbH Germany, molecularly tagged larvae were released back into the sea after being hatched from eggs collected at MFF. These DNA tagging experiments are run by Professor Christopher Bridges, who estimated that over 75 million DNA tagged larvae were released back into the sea during the three-year MARS GmbH Project.

In the future, MFF and its scientific partners hope that the value of this type of collaboration can be assessed and continued so as to provide a more sustainable industry. 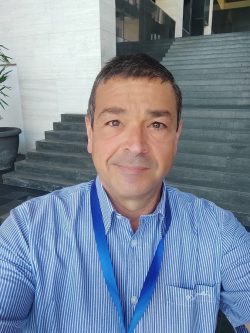 Robert Vassallo-Agius is an international aquaculture consultant, specialising in the development of marine broodstock and aquaculture for new species. With 33 years experience, he has contributed to the development of species of commercial interest, like yellowtail and striped jack in Japan, as well as the Atlantic bluefin tuna and the Mediterranean amberjack in Europe. Currently based in Malta, he lectures aquaculture at the Malta College of Arts, Science and Technology and consults internationally on a number of marine aquaculture projects.