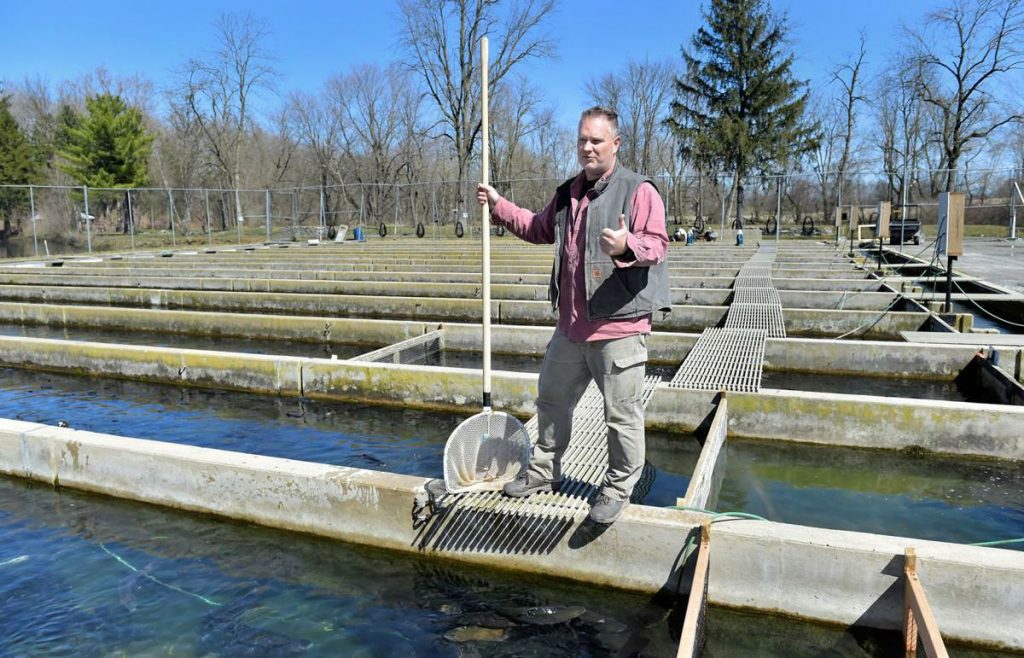 Mark Ely owns the Limestone Springs Fishing Preserve in Pennsylvania. He says all aspects of his Rainbow trout business have been affected by the impacts of COVID-19.

The COVID-19 pandemic has caused significant impacts to almost every aspect of modern life and business, and the fish culture sector is no exception. Business has been impacted at every level, including the operations of hatcheries. Hatchery International spoke with representatives for the industry from around the world about the impacts of the pandemic-related orders for citizens to remain at home and for non-essential businesses to close.

EUROPE
The biggest impact on the industry worldwide has been the closures of restaurants, hotels and catering services. Javier Ojeda, interim general secretary for the Federation of European Aquaculture Producers (FEAP), says that over 35 percent of farmed fish in Europe cannot be sold currently. Retail sales may be slightly increased, but nowhere near enough to offset the loss of the other markets. As a result, the industry is experiencing a liquidity problem due to lost revenues. And, with stocks in the water, farm production cycles have been disrupted as the pens and tanks are not empty in time to put in new juveniles. Ojeda identifies two significant impacts on hatcheries.

“First, clients of the hatcheries are short on liquidity and at the same time, they are not able to take in the juveniles that they had programmed to receive and buy,” says Ojeda. “The problem of the ongoing part of the industry is moving down the value chain over to hatcheries. Hatcheries are beginning to experience liquidity problems, but many are facing the non-possibility of sending their juveniles over to the farms. There is a month, month-and-a-half delay on the impact of the COVID crisis on hatcheries, but it’s arriving and what they have to do is stop production.”

Hatcheries and other aquaculture businesses continue to operate as essential businesses – food is still required and fish are already in the waters. Conducting hatchery operations while observing social distancing measures has presented a logistic challenge as work shifts and procedures must be altered. But there are other challenges that are out of the hands of the hatchery operators.

“There has been a high risk in the normal management of farms, because the delivery of liquid oxygen or of feed has been at risk in certain moments because of cross-border complications between neighbouring countries or just inside each country,” says Ojeda. “Hatcheries are very, very dependent on the availability of gasses like liquid oxygen or CO2.”

Ojeda says FEAP has been lucky that there haven’t been any cases where transportation issues have caused problems for hatchery operators in their membership, but the risk was there and companies had to look at developing contingency plans in case their deliveries were delayed.

NORTH AMERICA
Katie Harris, president and general manager of Mt. Lassen Trout and Steelhead in California, says that the order for residents of the state to stay at home halted every market that their farm and hatchery serves.

“As of right now, we have no sales for the foreseeable future and this is traditionally our busiest time,” says Harris. “I pray this ends quickly but I am not optimistic given the conditions here in California. My goal is to try to stay in business with as few layoffs as possible.”

Operators are concerned about the impacts that long-term, stay-at-home orders will have. For hatcheries that support recreational fishing efforts, winter and spring leading into the summer are crucial times of year and Harris, who also serves as president of the U.S. Trout Farmers Association, is worried about the impacts.

“How long these quarantines last and when stocking can resume or begin will probably dictate the fate of many farms,” says Harris.

Pennsylvania’s Limestone Springs Fishing Preserve has three segments to its rainbow trout business, says owner Mark Ely: recreational stocking, the food market and on-site fishing. Each aspect of that business has been affected by the pandemic. Much like in Europe, sales to restaurants have vanished entirely and are not offset by minor increases to sales in grocery stores.

“And our stocking side is way off,” says Ely. “In Pennsylvania, we’re very big on the recreational stocking business for trout. But all the municipalities who buy for rodeos in their county or in their borough, they basically all cancelled. Some of the bigger clubs that get hundreds of people out cancelled, so that side has really taken a hit and that’s our bread-and-butter right now. That pays the payroll in December, what we’re making now. It’s tough.”

On-site fishing is actually up, however, as fishing remains one of the few outdoor activities that Pennsylvanians can still enjoy. But Ely notes that they have had to change some of their operating protocols, including disinfecting everything possible and ensuring that customers maintain proper social distancing.

Jerry Weigel, fish production and development section supervisor with the North Dakota Game and Fish Department, says the state is fortunate as they are likely the last state in the lower 48 to be shipping fish. As of press time, they were starting spawning operations for Northern Pike and had yet to take any eggs.

“The lateness of our activities is hopefully helping us get past some of these very critical weeks right now,” says Weigel. “And then on the hatchery end, of course, we have all our salmonids and trout on hand and that’s all essential services – it’s almost business as usual up there, not much of a change at all.”

State hatcheries have also incorporated new safety protocols, keeping workers far apart from each other whenever possible. In cases where social distancing is not possible, masks and even clear acrylic shields are employed. Weigel theorizes that hatcheries and aquaculture companies may be better suited to adjust to the circumstances of the pandemic since strict bio-security measures are already a fact of life in the industry.

“We fully disinfect our transport units and everything before we leave the state, that’s been a standard protocol,” says Weigel. “A lot of the things that we’re seeing now that we’re doing as humans that seem so foreign have been standard protocol in the fish world for a long time.”

One of the biggest concerns for Weigel was that interstate travel restrictions would prevent the department from trading walleye for trout with their counterparts in the Wyoming Game and Fish Department. However, restrictions were lifted just before press time and Weigel had already made two trips to Wyoming.

ASIA
The first large-scale impacts of COVID-19 were felt in Asia, before they were reported in North America or Europe. Numbers released by China, for example, show a peak of nearly 20,000 new cases in February that dropped to single digits in the following months. As such, Asia is in many ways ahead of other markets and there is a sense that normalcy is slowly beginning to return.

“Most farms and hatcheries are already open,” says Dr. Huang Jie, director general of the Network of Aquaculture Centres in Asia-Pacific. “In the early times, there were huge losses for this market. In China, there is a big market for aquatic animals, but during that time it just stopped. So they lost a lot. But I think recently, the price is going up.”

Huang says many in the sector believe there will be a “golden period” in the market as things return to normal and as citizens, desperate for a return to pre-pandemic life, will be eating out at restaurants more than before.
Operators in Asia and around the world should be wary of rushing to get things back to normal, however. Shortly after Huang spoke with Hatchery International, new cases in China returned to double-digits for the first time in weeks. And in Singapore, which had been lauded as a model in pandemic response earlier in the year, a second wave of the virus saw confirmed cases jump from 266 to over 5,900 in a country with a population of 5.7 million.