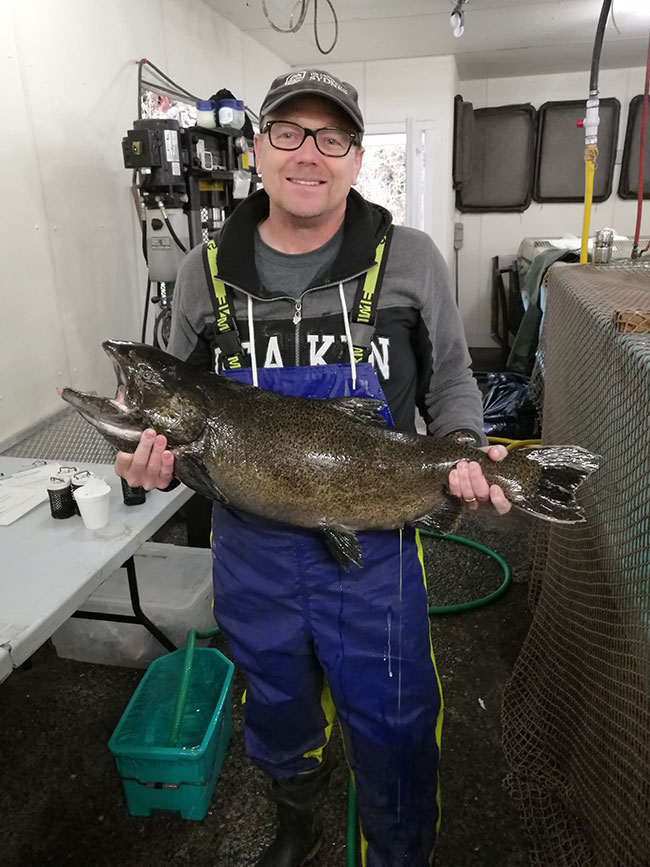 Brian Dixon holding a Chinook broodfish at a B.C. hatchery. Dixon is studying fish genomes that will make the species more resistant to disease.

Aquaculture has exactly 10 years to meet the global seafood demand by 2030.

According to the Food and Agriculture Organization of the United Nations, the industry will need to supply two-thirds of the world’s seafood requirements or risk the world facing a seafood shortage of 50-80 million metric tons.

As we enter a new decade, there are technological pioneers in the industry that are helping drive aquaculture into the future.

Designer fish
As the industry looks to more sustainable ways to increase production, the Centre for Aquaculture Technologies Canada (CATC) is investing its resources on gene editing technology. Executive vice-president of research Debbie Plouffe says the future of aquaculture is in genetically-designed fish that are tolerant of warmer climates, disease-resistant and reproductively sterile.

“Different industries within the aquaculture industry probably fall somewhere in the continuum of genetic improvement but towards the most disruptive end of the continuum, is gene editing technology and that’s where we spend a lot of time in R&D,” says Plouffe.

Plouffe is a molecular and cell biologist with a specialty in fish immunology and fish health. She has conducted leading research projects in the industry for 12 years. She currently oversees several new projects and collaborations from the CATC facility in Prince Edward Island, Canada.

The Centre is also collaborating on a new consortium funded by the Atlantic Canada Opportunities Agency looking to identify genetic markers in Atlantic salmon associated with tolerance to higher water temperatures. This also includes response to vaccinations and response to pathogens under these conditions.

Interest in gene editing is slowly growing in the industry, Plouffe says, because it offers the value of time. Targeting small permutations can make genetic gains in the stock in a shorter amount of time than through traditional selective breeding methods.

“This has only been in the last year or two, I would say, that regulatory agencies in different countries are starting to put some framework around how these types of gene editing technologies might be regulated differently from traditional transgenics,” says Plouffe. “I think we’re starting to see a regulatory shift which means that this technology may have a shorter path to market than previous technologies, like transgenesis, had. It took them 20 years to get to market.”

Sustainable fish health strategies
Advancements in understanding the genomics, or genetic makeup, of fish species have huge opportunities in improving the sustainability of the industry. By studying a fish species’ genetic code, researchers can pinpoint the specific genetic traits that will lead to a bigger, better, stronger broodstock.

The University of Waterloo in Ontario, Canada, is making significant developments in this area. Associate professor Andrew Doxey is an expert in biological data mining, protein function prediction, and comparative and evolutionary genomics. He, along with research assistant Grant Cheng, recently developed an algorithm that powers a groundbreaking genome database.

“It searches all the genome data that’s out there and it looks for specific characteristics that look like antimicrobial peptides and what they found was at least 30 things that look like these that are not known to science at all,” says professor and colleague Brian Dixon. “In fact, some of these are not in the familiar families of antimicrobial peptides at all. They are completely novel.”

It was simple computer program but it opened up new possibilities of synthesizing two new antimicrobial peptides that could reduce the use of antibiotics in the industry.

In Canada alone, the aquaculture industry dumped about 150 tons of antibiotics into the ocean in the last year. Antibiotics are incorporated in fish feed as a common prescription to cure diseases in the stock.

This leads to antibiotic resistant pathogens in the environment that can be absorbed by fish (and humans). It becomes an endless cycle in which farmers introduce newer and stronger antibiotics to protect their fish from disease.

Dixon says harnessing antimicrobial peptides that naturally occur in all organisms might be the more sustainable alternative to treating the fish’s immune systems.

“The (genetic) sequences we’ve got are not just in fish genomes. They’re in pig genomes, they’re in human genomes, so it could potentially be a treatment for multiple classes of animals,” says Dixon.

The research team is looking to publish their research soon, but Dixon believes they have only scratched the surface on the potential uses of the genome database program in their research.

The FarmMojo mobile app uses artificial intelligence to help shrimp farmers in India improve productivity and traceability at their farms.

Improving access to technology
New technological advancements are only useful to the aquaculture industry if people at the grassroots level have access to it. This is the revolution that Rajamanohar Somasundaram hopes to lead through his mobile app, FarmMOJO.

Somasundaram’s background is in tech startups, not aquaculture. But it was during a serendipitous train ride back to his hometown of Chidambaram, India, in 2016, when he sat beside a rural shrimp farmer that he realized his opportunity to use his artificial intelligence (AI) and data computing skills to make a difference in one of India’s largest industries.

“In the West, huge capital investment has to go in, to manage an aquaculture farm operation. In India, it is all about small and medium farmers. About 80 per cent of production come from these small and medium farms,” says Somasundaram. “Typically, you will start doing aquaculture just by word of mouth. You will not have a scientific or professional knowledge about this business. It’s as simple as, your neighbor did it, he made good money, he bought a new car and a new house, so you want to get into this business.”

Sanjai Kumar, the shrimp farmer he met on the train, told Somasundaram about his struggles managing his “one or two-acre” farm. Even after 20 years of experience, the farmer was going broke because he couldn’t keep up with the high production costs, the disease outbreaks, managing water quality and all other operational aspects of running the farm.

After the train ride, Kumar took Somasundaram to his farm. They also looked at the neighboring farms and Somasundaram quickly understood that the solution was to automate more of the farms’ operations.

In 2017, Somasundaram, Kumar and Shanmuga Sundaram, a former banker turned entrepreneur, founded AquaConnect, an AI-enabled platform that can be accessed through its mobile app, FarmMOJO. This tool helps improve farm productivity and traceability by keeping track of pond water quality, feeding information, growth rate and other production data in one place.

FarmMOJO uses machine-learning technology to analyze data and generate predictive insights to improve productivity. The app also gives shrimp farmers access to a network of local technical service managers that can provide their expertise for every 20 farmers within their region.

AquaConnect’s full suite of products and services can be accessed through a pay-as-you-go model, which Somasundaram strongly believes, is why FarmMOJO has been adapted so widely in India’s aquaculture industry.

“The cost of the technology has to be proportional to the incentives of the product,” he says. “Most of the technologies that are built in the West, they are simply asking for thousands of dollars per license which can be the profit (margin) for the farmer in many cases. So, how can we expect the farmer in such technology? So, we have to bring in new, innovative pricing models.”

Somasundaram says AquaConnect is in the process of developing a new feature for FarmMOJO, which is a data-driven marketplace platform that hatcheries, feed producers, equipment manufacturers and other suppliers of the industry would pay to promote their products to the farmers.

AquaConnect is also working with banks and insurance companies which, Somasundaram says, are typically averse to investing in or doing business with small aquaculture farms.

“Since there is no reliable data, they (banks and insurers) are not able to assess the farmer’s credit worthiness and risk potential,” explains Somasundaram. “How can we fill this gap through FarmMOJO? That is something that we are actively thinking about right now because we know what the farmer is doing at any given day. We can provide the information that can help create the framework for their credit worthiness.”

“I always understood that I won’t be able to make money through the technology solution that I’m providing,” says Somasundaram. “We work with farmers end-to-end… We have always created these products for them.”

Community engagement
Bringing technology to the masses is not only beneficial for moving the industry and the economy better, it also facilitates better education for the consumer.

At the Norwegian University of Science and Technology, a small team in the IMTEL research group and lab is harnessing virtual reality (VR) and augmented reality (AR) technology to bring the story of aquaculture to the people.

Head of the IMTEL research group, Ekaterina Prasolova-Førland first presented a VR simulation at an aquaculture conference in 2015. Using an Oculus Rift device, the user can interact with a 3-D immersive experience of a salmon aquaculture farm.

Since then, Prasolova-Førland has been looking into other applications of VR and AR technology to increase professional training and public education about the industry. Her latest project is an AR program in collaboration with Master’s student Aslak Karlsen.

“It involves visualizing fish pens and their placements in the ocean, while also being able to see from inside the fish pen. The goal moving forward would be to work more towards use for education for people without knowledge of aquaculture, the life of the fish, the wellness of the fish,” says Karlsen.

He adds that his AR prototype has many applications. The simulation can be a useful tool to plan fish pen placements within a 3-D ocean layout. There can also be future applications in which farm managers can remotely examine a 3-D layout of each net pen without having to coordinate a diving expedition.

But more importantly, he hopes the program can provide interactive learning experiences for the general public to learn more about an industry that accounts for more than NOK$64.6 billion or US$7 billion in export value.

There has been a recent push, even among Norwegian companies, to invite local high school groups and host community open houses to tour their facilities. However, even as a world leader in the industry, Prasolova-Førland says Norway still has a long way to go to raise public awareness about aquaculture.

“I mean, I’ve heard people say, ‘Is there salmon in Norway?’” she says. “It’s an important food source but people are not aware of where their food comes from… There are also prejudices about the industry about environmental challenges and antibiotics in the ocean.”

Aquaculture in Norway is only about 45 years old. But over the last 25 years, production of salmon and rainbow trout increased about 10 percent each year, according to Norway’s International Research Institute of Stavanger.

Prasolova-Førland says the Norwegian University’s Department of Education and Lifelong Learning has a special role to play in connecting this fast-growing industry to the consumer.

“Apart from some, the aquaculture industry is not seen as a relevant job prospect or career but after they have tried our programs, they gained some interest to explore more. For one of them, it even led to applying for a permanent position,” says Prasolova-Førland.