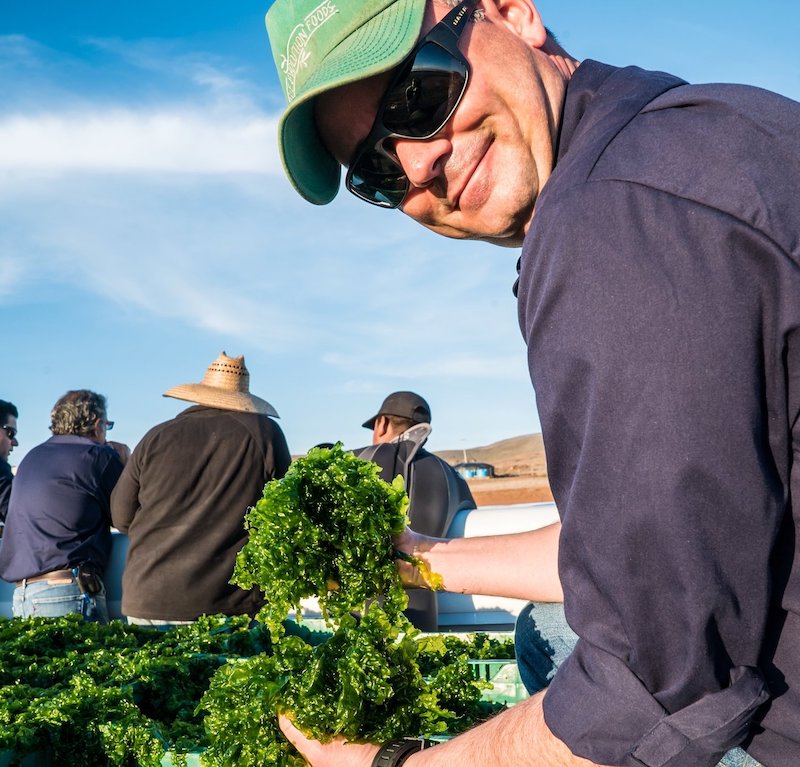 Alaska’s burgeoning kelp farming industry has its success tied to two hatcheries and a law.

Blue Evolution is working under a collaborative research and development agreement with NOAA to use the Kodiak Fisheries Research Center hatchery to grow the kelp seed that the company will supply to growers on partner farms.

“NOAA provides a space (no lease), and we capitalize the equipment,” says CEO Beau Perry. “And we work with them on various research threads.”

Much of the east coast oyster industry technology was developed under this type of agreement with the NOAA facility in Connecticut in the early 1970s, Perry points out.

“Currently, there are many nascent aquaculture business across the country working with NOAA in this way,” he adds.

The hatchery uses a recirculating system, and is able to utilize unused cold rooms at the facility, as opposed to water chillers. Perry estimates it has nearly 100 tanks, with capacity for several thousand spools and hundreds of thousands of feet of seeded string.

“We will certainly be pushing up against capacity as we are lowering the density of spools and tanks per cold room this season,” he explains. “But we can expand further using auxiliary space in the future.”

New build
Markos Scheer, the CEO of Premium Aquatics, says his company is putting the final touches to a new kelp hatchery they have designed and built on leased land at the Oceans Alaska hatchery site in Ketchikan, to supply their newly licensed 126-acre Sea Grove Kelp farm.

“We are using our own expertise,” says Scheer. Dr. Tiffany Stevens, who did her doctoral research in kelp physiology, will be heading up his team.

The new Ketchikan build will have eight seed tanks installed in each of the 10 individual rack systems, for a total of 80 tanks. Each rack system is independently filtered and circulated.

The entire space is temperature controlled at 9C to 10C, and the recirculating sea water will take on that temperature, Scheer explains.

The department of Fish and Game is looking to maintain genetic diversity of the species by requiring that broodstock must be collected within 50 kilometers of the outplant area, and include 50 different parent plants that are unrelated to each other.

“That’s difficult to do given our current technology,” says Mike Stekko, a University of Alaska Southeast professor.

The 50-km rule is not a problem for Scheer with his one site, but Perry finds it tough when he is dealing with multiple sites even around Kodiak island.

“I have to silo each broodstock separately and that is a lot of extra work,” he says. “I have no insurance policy. If one broodstock crashes, I can’t replace it with seed from another site.”

And it is imperative that new licensed sites are studied to be sure they grow enough biomass for broodstock.

“We are having trouble finding saccharina in some areas of the state,” Stekko notes. “But alaeria grows everywhere.”